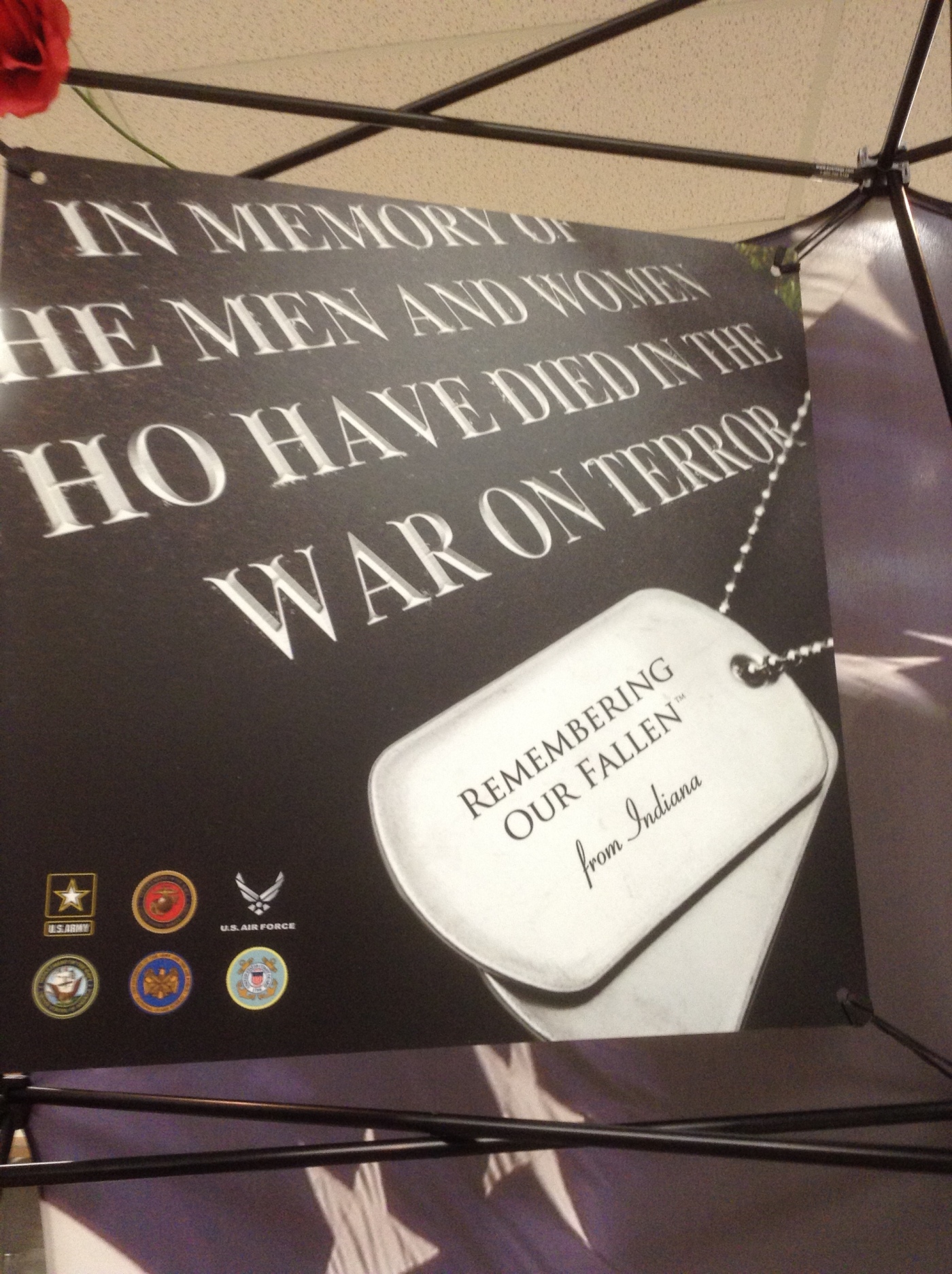 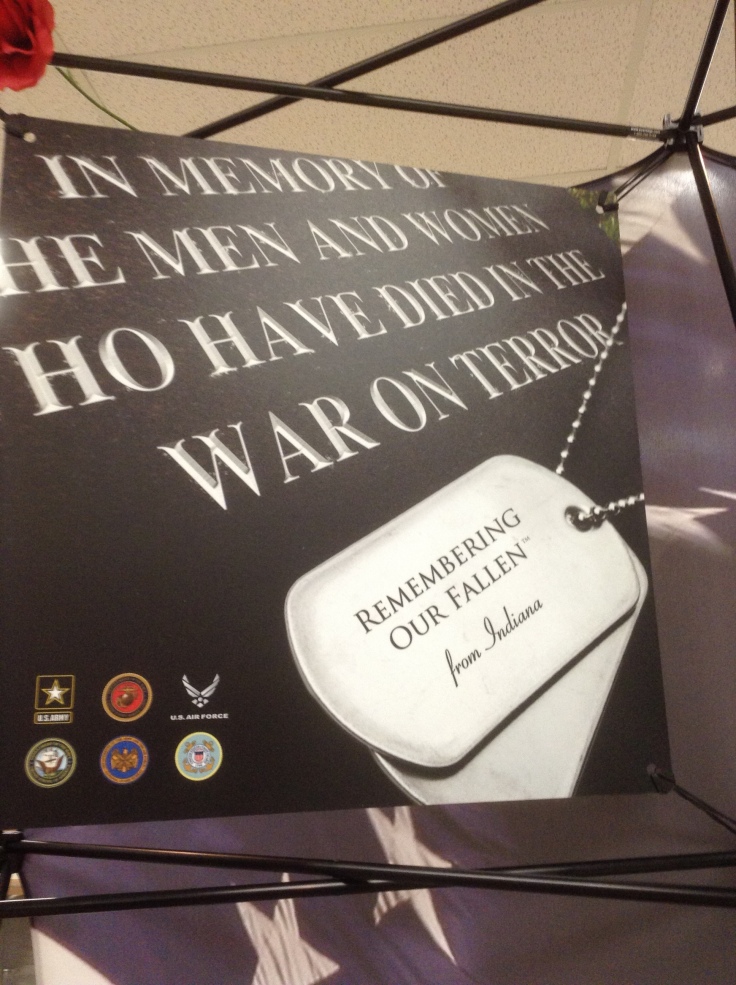 It’s been a busy couple of weeks for us and many other military families around the nation. Veteran’s Day is perhaps the biggest day of the year for all vets. It gives the public the opportunity to honor them in so many ways. 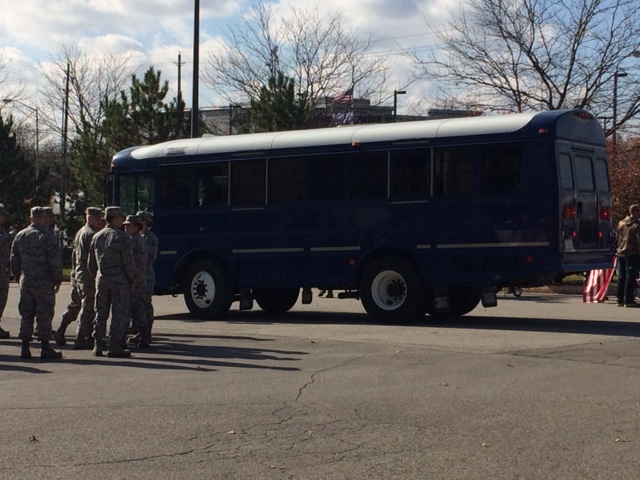 John & I participated in Fort Wayne’s Veteran’s Day Parade. He rode the Air National Guard bus while I walked with the Blue Star Mothers. I had more fun handing out candy to children along the mile-long route, but guess who was more tired at the end of the parade?

Thanks to everyone in the Fort Wayne area – Boy Scouts, school bands, military groups and supporters – for going to the effort of showing our vets how much we appreciate them! 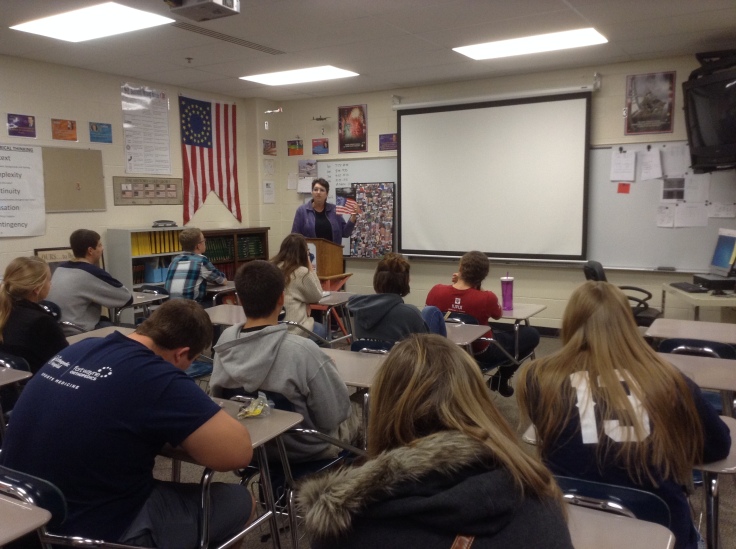 Speaking opportunities for me to tell people about my World War II book of veteran stories abounded. These are pictures of some places I’ve been.

Brian Lineberry allowed me to speak to his class at Bellmont High School in Decatur. The class is studying World War II and preparing to write profiles of fallen World War II soldiers from the area. Cool! I gave them tips on research and what they might discover.

Lani Mahnensmith asked me to speak to a grief support group that meets at Kingston Retirement Center in Fort Wayne. Met some vets there I’ve interviewed and ate lunch with them. Double cool! 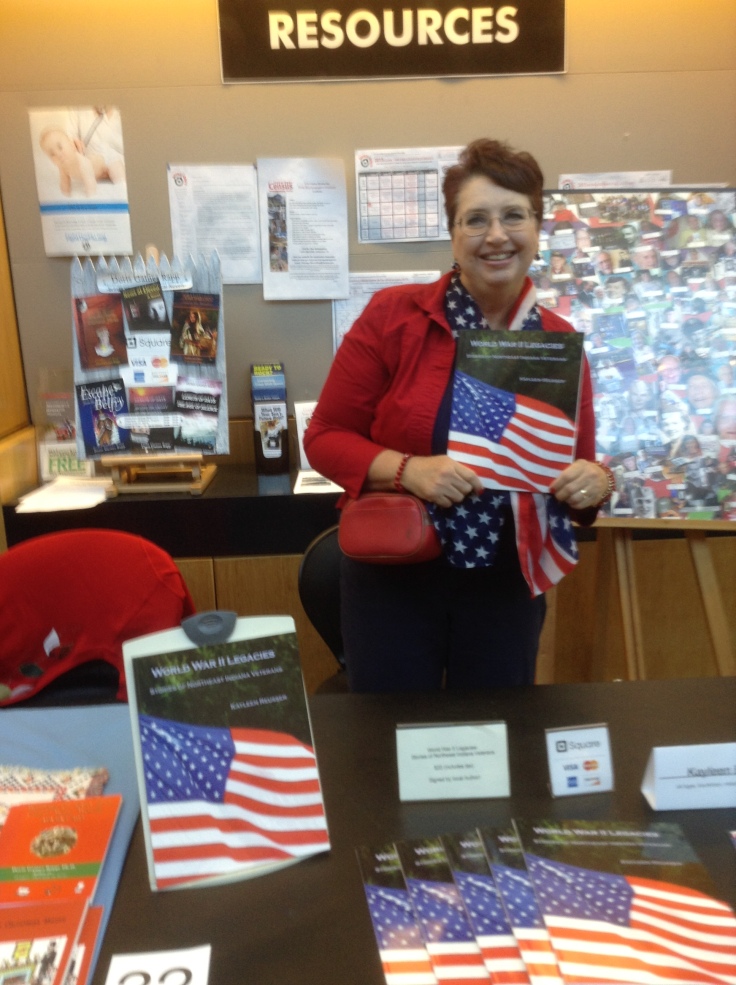 The Allen County Public Library Author Fair was well attended. Several people stopped by to ask about the book and we chatted about World War II vets in the area. 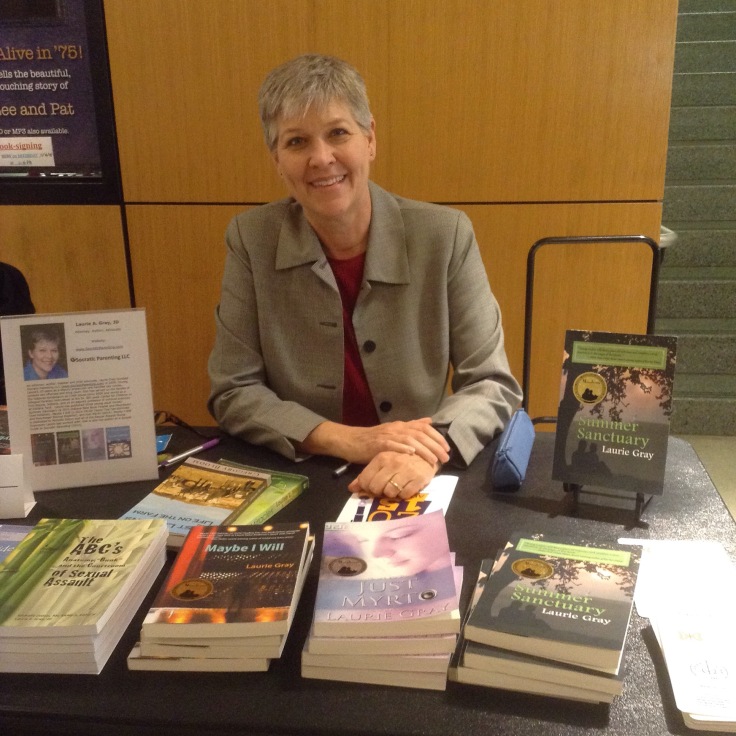 It was fun seeing author friends Laurie Gray (above) and Doris Rapp (below). 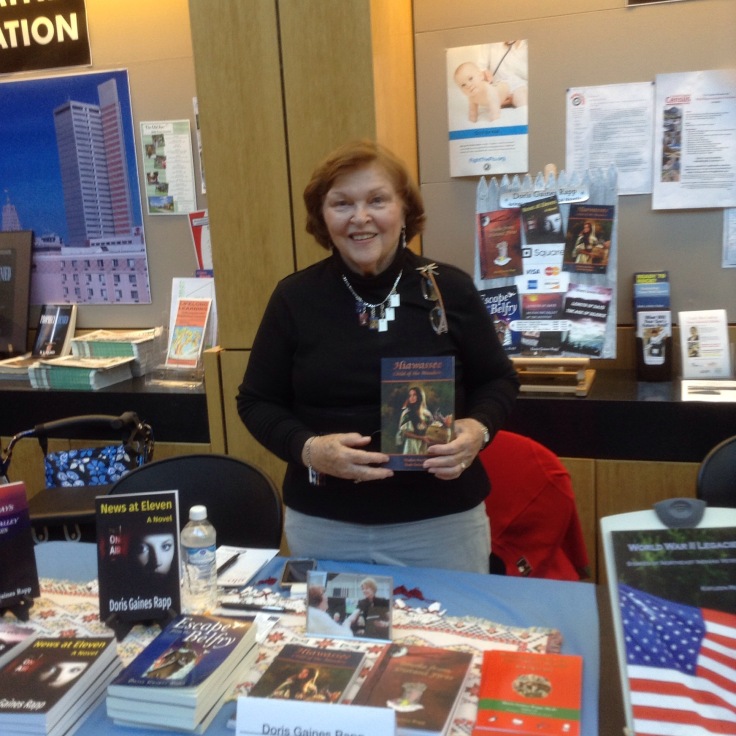 We all were asked to speak on panels about writing. 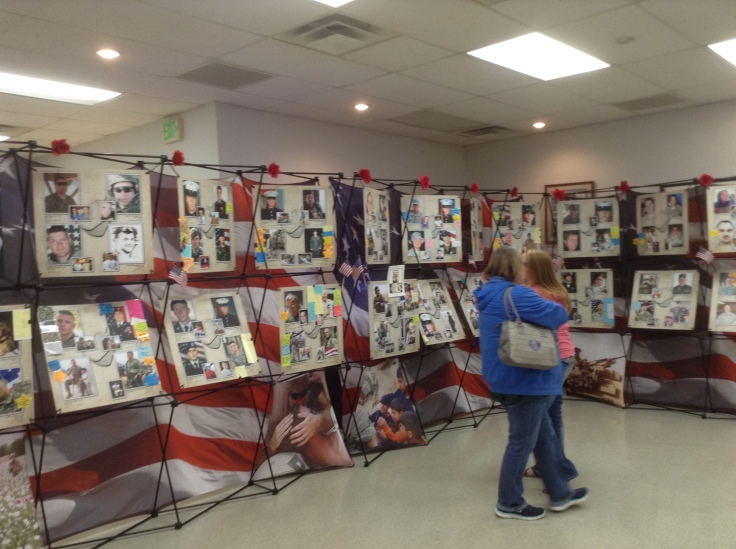 one last thing to mention—the American Legion 241 Post in Fort Wayne hosted an exhibit that I’m sure moved everyone who viewed it.

It displays names, photos and mementos from family / friends of fallen soldiers from Indiana. The display was organized by a father who feared the public would forget his soldier son after his death. It is respectful and maddening to think of our loss because of their sacrifices on our nation’s behalf. 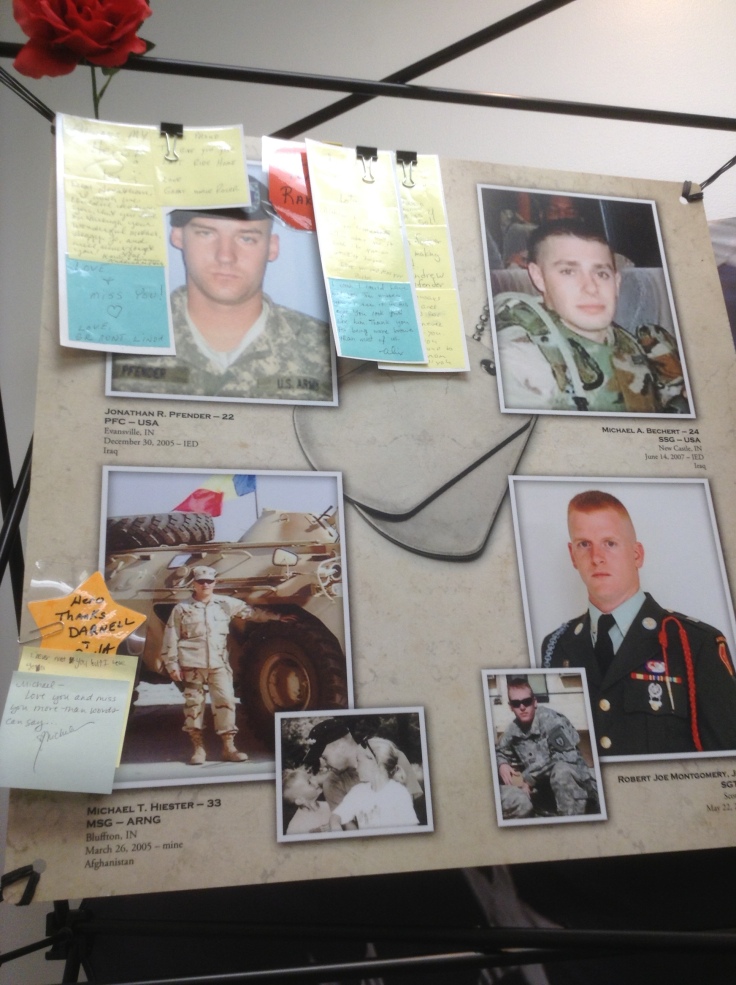 The display is especially meaningful for me as there is a photo of a man who grew up in my church. See lower left.

Master Sergeant Michael Hiester, 33, was killed in Afghanistan in 2005 by a mine explosion. He left behind a wife, son, daughter, parents and two sisters, a church who loved him and many, many friends. I love them and respect them so much for carrying on. I don’t know how family get through those painful experiences. The least we can do for our fallen heroes is to show respect for every veteran we meet.

If you have a chance today, thank a veteran for his/her service!