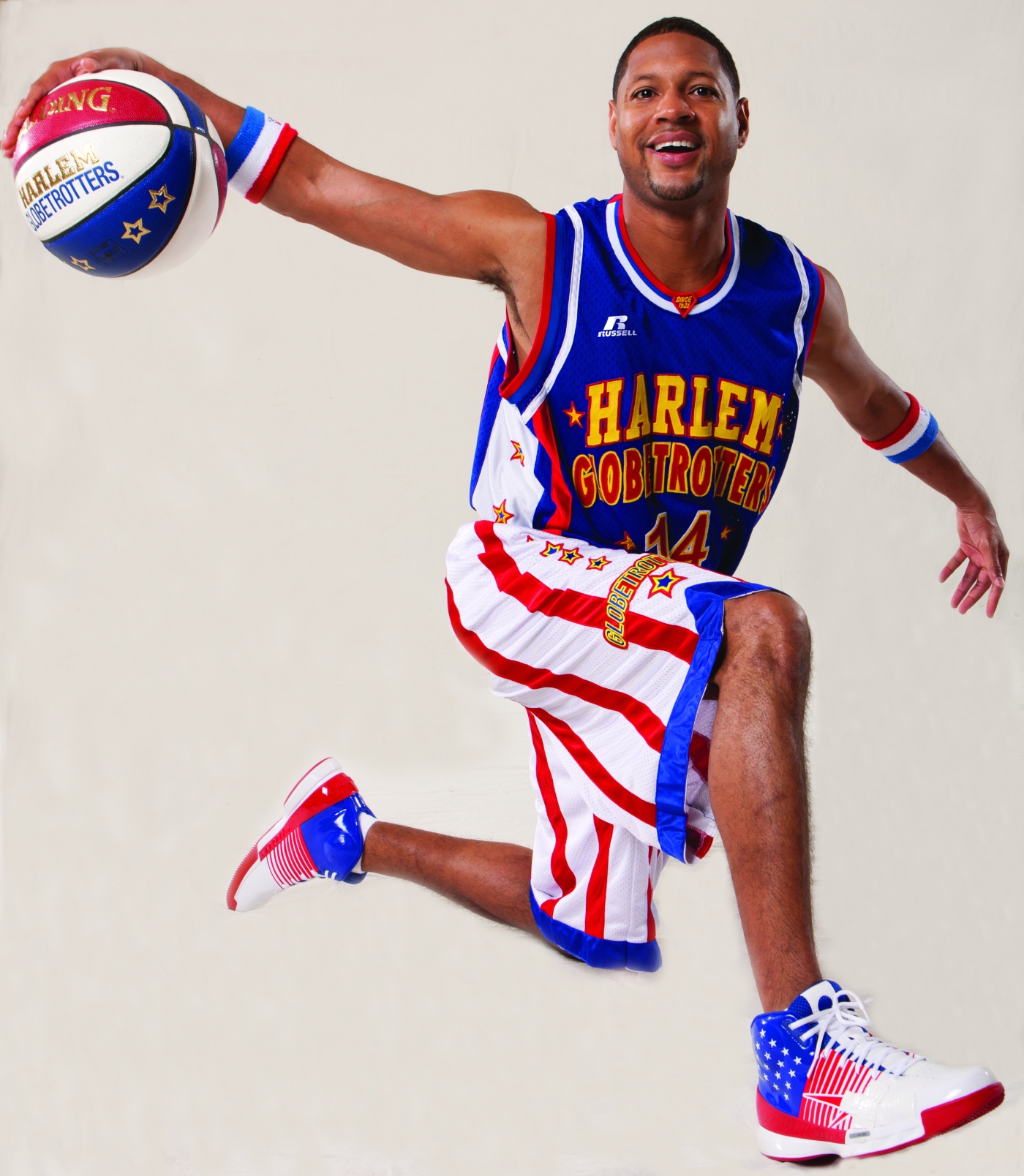 While on assignment for the Fort Wayne News-Sentinel newspaper recently I had the opportunity to interview Harlem Globetrotter ‘Handles’ Franklin. The Globetrotters were in Fort Wayne to play at the Allen County War Memorial Coliseum.

To say Mr Franklin values education would be an understatement. Read to discover how much this athlete cares about kids.

“When I was a kid in the 1970s, I watched the Harlem Globetrotters and Scooby Doo cartoons,” said Chris “Handles” Franklin. “My goal in growing up was to either play basketball or be a crime fighter.”

Franklin saw his dream come true in 2007 when he became a member of the Harlem Globetrotters, the 85-year world-famous, fun-loving basketball team known for such talented ball players in the past as Meadowlark Lemon and Curly Neal.

Don’t mistake the Globetrotters as static, just because they as a group have nearly reached the century-old mark. “We are continually re-inventing ourselves,” said Franklin. “Years ago we popularized the slam dunk shot and 3-man weave. Now we’re bringing in the 4-point shot. It’s 12 feet farther away from the basket than the NBA’s 3-pointer. It’s never been done before but the Globetrotters are known for making long shots. We’re adding a new dimension and hoping it could catch on.”

Athletic skill is not the only thing the Globetrotters want to be known for. One program they have implemented to re-enforce to kids a productive lifestyle is a program they call “CHEER”. This stands for cooperation, healthy mind and body, enthusiasm, effort and responsibility. “When we speak at schools, we tell kids how they can develop these characteristics and why they should listen to their parents and teachers about staying away from drugs and earning an education,” said Franklin.

“As a kid, I thought that kind of talk was wrong, but it was the most valuable advice they could have offered me. With my Masters degree I have an education to fall back on.”

The 6-1, 175 lb. guard of the famous basketball group was raised in a family from Harrisburg, Pennsylvania, that stressed community involvement. “My dad was a policeman and my mother worked in a hospital,” he said. “They taught my brother and me to be involved with people and to value our education.”

After high school, Franklin attended Lock Haven University (Pa.) where he majored in social work. He later earned a Master’s degree in the same field.

As an undergraduate student Franklin played basketball, becoming the school’s second all-time assist leader, along with ranking in the top 10 in the nation in assists and steals. In talking to him you sense he is more thrilled with the way his education, not his ability to handle a ball, has benefitted him.

“The great thing about being a Globetrotter is that not only do we have to be good basketball players but good role models,” he said from his hotel room while on tour with the Globetrotters in Kentucky. “We are good will ambassadors, especially for education. All of us Globetrotters have been to college and a high percentage of us have degrees. We strive for excellence and education.”

Franklin’s passion about education carries through to another subject. “I tell kids to  believe in themselves and what they want out of life,” he said. “No matter what anyone says, they should strive to achieve what they want. In my life people said I could not be a Globetrotter. But with hard work and persistence I did it. That determination was instrumental in making me who I am today.”

After graduating from college, Franklin sent audition tapes to the Globetrotters. As he tells it, they were not completely interested.

“I didn’t get in right away,” he said. That didn’t faze Franklin who made a name for himself with Nike freestyle ads as the world’s best ball handler. Finally, after much persistence and patience, Franklin was selected as a member of the team. ‘Sometimes you have to be creative and come up with ways to show your desire to excel,” he said.

Just as at every point in the team’s 85-year history, the Globetrotters’ approach to entertaining people transcends nearly every obstacle. “We have the ability to emotionally connect with every person,” said Franklin. “They don’t have to be into sports. We speak a universal language which crosses age, gender, race, culture and language barriers. That message is that you can have wholesome fun at an athletic event. If we can teach something valuable to kids at the same time, it makes it all worthwhile.”