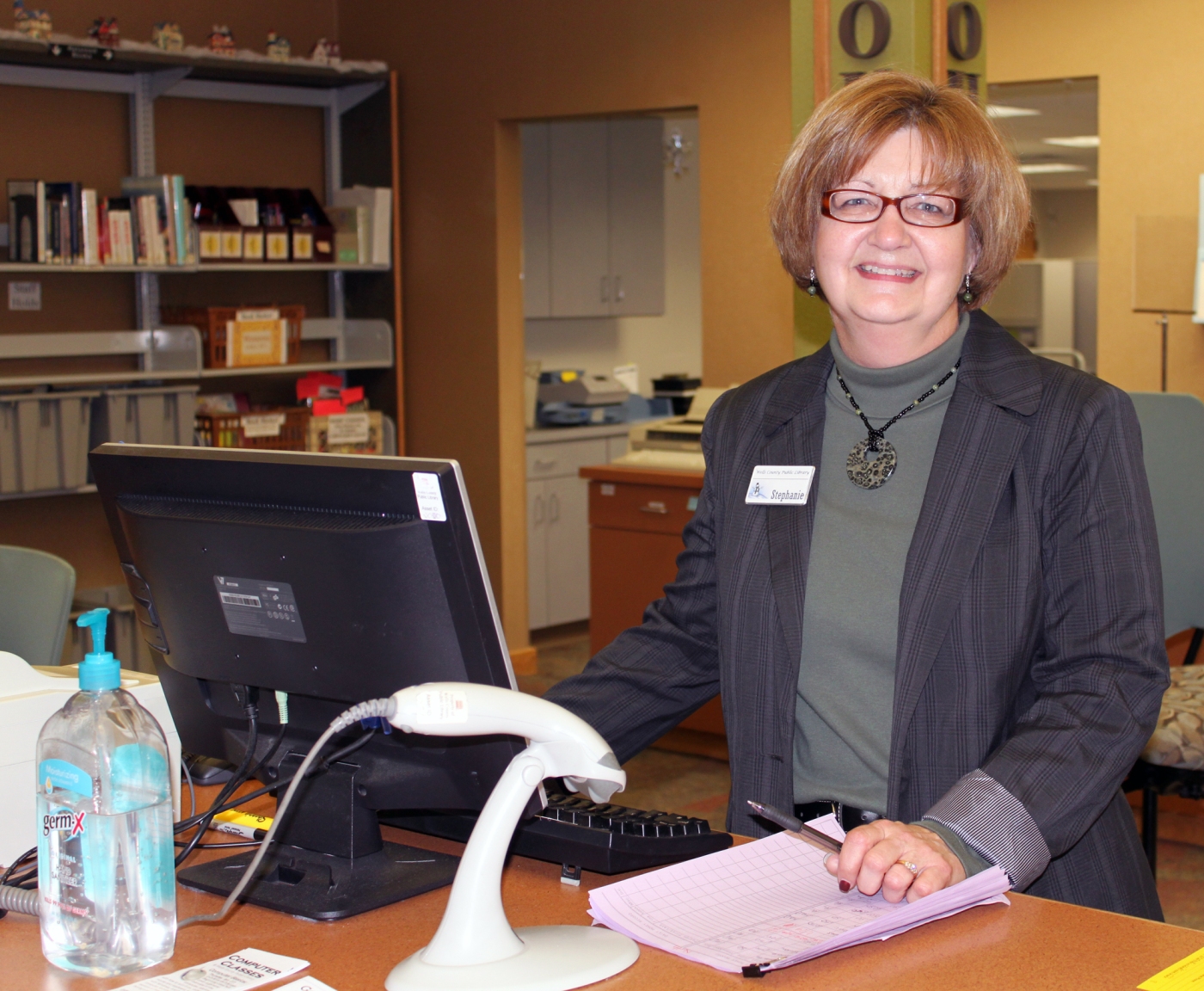 People who know me know I love libraries. I’ve worked in two and enjoyed the experiences of being around so many great books and people who love them. This interview with the director of my hometown library was a pleasure—I think we have one of the nicest libraries in our area! Please take time to read this story and visit the Wells County Public Library.

When Stephanie Davis, director of the Wells County Public Library, was growing up in Indianapolis, she spent most of her free time at her local library branch. “It was a small one-room library and I must have read most of the books in it,” she said. “My nose was always in a book.”

Davis, a resident of Ossian, graduated from Ball State University, majoring in education in Math and Psychology. She obtained a Master’s degree in counseling and taught high school math for several years before moving to Bluffton with her family. Unable to find a  teaching position, Davis accepted a temporary job in the Wells County Public Library in December 1985. “The staff was seeking a qualified children’s librarian,” she said. “They hired me to fill in.” Davis worked with Susan Dailey and Amy Greiner in the children’s department. When Dailey left the Bluffton library to become director of the Ossian branch, Davis was hired full time to continue working in the library.

In 1997 Davis became interim director of the library. Three years later, upon obtaining her Masters of Library Science degree at Indiana University- Purdue University- Indianapolis, Davis was offered the job of library director. She accepted and has held that position since.

Computerization in the library is one of the biggest changes Davis has seen during her quarter of a century working at the Wells County Public Library. “When I started in the old library, we were just starting to automate,” she said. “All I did for a long time was enter data into the computer.” Construction of the new, present building in Bluffton was completed in 1991 and the library moved from the Carnegie building on Washington Street across the street. The library in Bluffton was renovated in 2007.

At first the advent of home computers caused Davis to believe the demand for Internet accessibility at the library would decrease. The opposite occurred. “I thought people would buy their own computers and not need them at the library,” she said. “But with more services available online, such as unemployment benefits and online classes, we’ve seen an increased demand for computer services.”

Davis has also seen a difference in how libraries are being used today. “Patrons used to come and pick up books and leave,” she said. “Now the library is more like a community center. People come in and stay. They may complete an online resume, do an interview or meet with a study group. We want input on how both libraries could be better used by  people who use those  buildings.”

The staff between the Ossian and Bluffton libraries (13 full time and 28 part-time) services 18,000 patrons. “Approximately 60 percent of Wells County’s population has library cards,” said Davis. “When you consider that we don’t issue cards to children under age 4 and several families have one card, that’s a high percentage.”

Though the Ossian branch is located in a smaller populated area than Bluffton, the library staff  tries to provide similar types of material and services at each. “We transport books and other available materials between Ossian and  Bluffton three times a week,’ she said. “When a best-seller is released, the library staff  tries to order enough copies to satisfy patrons at both places. If a book is not immediately available, patrons can place a hold online at the library website.”

The library receives 600 hold requests each month. “Patrons may sign up to receive email notices from us, stating that a book is available. The same procedure is available for renewing books. A reminder is sent out and patrons can renew books online.” Items checked out from the Bluffton library can be returned to the Ossian branch and visa versa.

One service patrons may not be aware of regards research. “Instead of buying reference books as we did in the past, we now subscribe to online databases,” said Davis. “People can use these resources at home by logging in to the library system.”

A more localized library service is to the homebound. “If a patron cannot leave their home on a temporary or permanent basis to come to the library to check out books, we check to see if a family member is available to pick up books for that person,” she said. “If not, a library staff member will deliver books to the home or facility.” A library staff member will also find books at the library and place them at the front desk for family members to pick up.

Davis credits the county library system for enabling the residents of Wells County to receive such attention. “All of Wells county supports the library, whereas in many communities the library is supported only by city residents,” she said.

While Davis’ goal in college was not related to a career in library science, she believes her math and psychology backgrounds have been used well in her role as director. “Besides books, I deal with finances, personnel, statistics, organization, and people, all things I enjoy!” she said.

Her goal as library director in 2011 is to increase the public’s awareness of the library’s services. “I wish even more people would use our facilities,” she said. “We  keep introducing people to the library, but thousands are still not using it. We look for ways to put people and books together.”