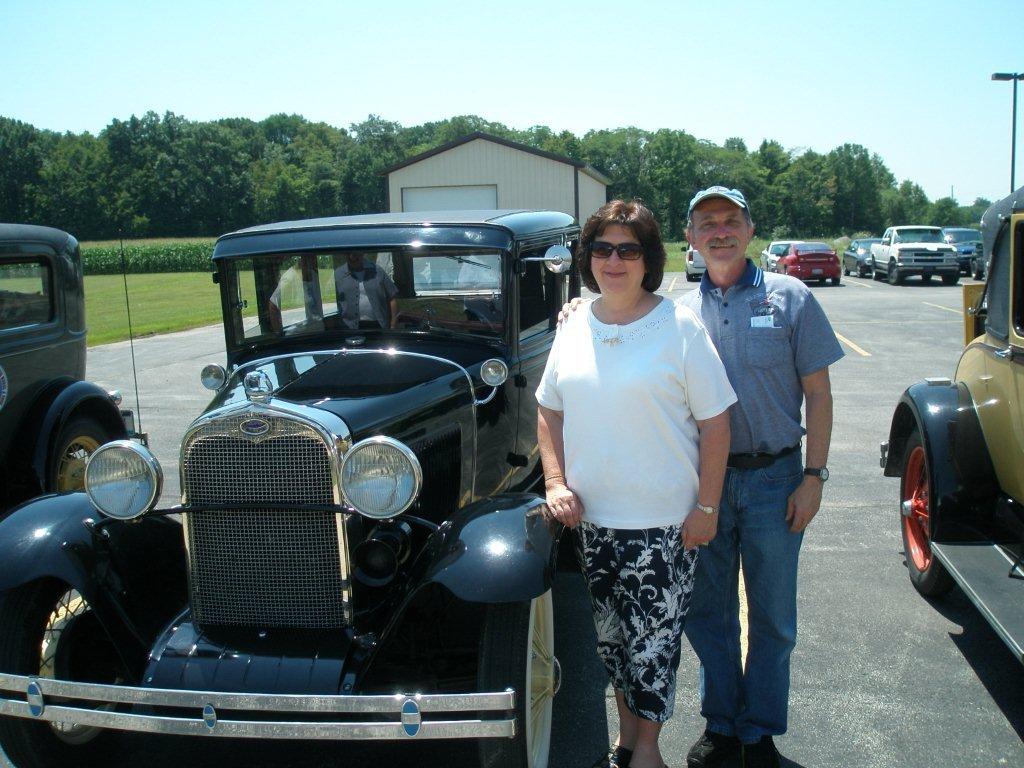 In the past couple of years I’ve written profiles of classic car owners for a publication called Indiana Autos and RV’s Magazine. It’s been fun interviewing car owners. I love to hear how much the car owners have enjoyed finding the car of their dreams and then restoring them. I’m looking for more stories. Do you know someone from Indiana with a classic car pre-1999? If so, please contact me with their name and phone number. Thanks!

In the 1970s when he was a young adult, Roger Byers of Fort Wayne purchased a Model A car restoration book.  Byers studied the book with hopes of someday restoring his own model. For the next several decades marriage and a family required most of Byers’ time and money.

Then came the 911 disaster. Within the next few years, Byers, nearing retirement, had purchased five old cars, including two Model A’s — a 4-door coupe and 1931 roadster with rumble seat. “I told my wife life was too short not to be having fun,” he said. The other antique cars Byers owns are a 1912 Model T with crank start, a 1910 Maxwell, and 1993 Corvette.

In 2006 Byers and his wife Linda joined the Old Fort Model A Club, based out of Fort Wayne. He currently serves as president of the club which features cars that were built between 1928 and 1931. “Approximately 73 families belong to the club,” he said. “Some families have more than one so we have approximately 100 Model A’s.”

The Old Fort Model A Club members live in Indiana, Ohio, and Michigan. Bill Milholland of Ossian purchased a 1931 Model A Victoria, complete with backseat for two in 2003. After several years of restoration work, the car has won several awards, including Chairman’s Choice (Best of Show) at the Bluffton Free Street Fair. During a trip to French Lick, Indiana, in summer 2010 to attend the National Model A Restorer’s Club show, Milholland’s car won the Award of Excellence for touring class. “Fifty cars were in the class,” he said. “A few other cars won the award too.”

The amount of miles Model A club members choose to put on their vehicles varies. “Some people drive their cars everywhere,” said Byers. “Others may only drive the cars for special occasions.” Tom Laupp from Huntington, Indiana, has driven his Model A an average of 12,000 miles each year since he purchased it in 1995.

Other club members, like Wayne Hull of Ossian, offer a garage day each May. Any club member who has a mechanical problem with his or her antique car can bring it to his garage in his home’s backyard and he will put the car on a hoist. “Our club contains many antique car experts,” said Byers. He estimates 40 car owners show up at Hull’s house each spring.

Byers, who is now retired, credits friends who own Model A’s for encouraging Linda and him to become members of the Old Fort Model A Club, which celebrated its 25th anniversary in 2010. “They invited us to accompany them on tours,” he said. “Through such experiences we met people who are now our friends. We have no regrets. The cars are a major part of our retirement life.”

Note: Other classic car stories I’ve written are posted on my blog. Click “Classic car’ in the tag cloud on the right of my home page for a search.

The women who chose to serve in #wwii were brave, adventurous, patriotic. I've included stories about female vets in all 3 of my WWII Legacies books, including Charlotte Eisenhart (second from left) served in the Army in Seattle. Mary Ann 'Marty' Wyall became a WASP (Women's Air Service Pilots). We are pictured here with veteran & outstanding #Bellmont High School teacher Brian Lineberry who teaches a course on WWII. Read & be inspired. #iloveveterans #USArmyhistory #Womenvets #airforce
Perfect gifts for the history lover, Baby Boomer, military loved one. The Bridge Church in Decatur 9a-2pm. #wwii #Christmasgifts
Is your mailbox as cute as this one? Order online items soon to allow time for delivery before Christmas. #wwii #iloveveterans