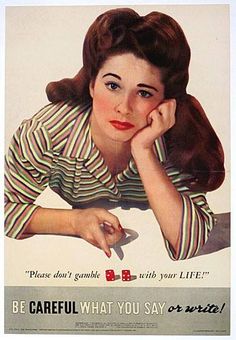 This excerpted story is from my book, It Was Our War Too: Youth in the Shadows of WWII. Margie’s picture is also featured in my new Women of WWII Coloring Book. Both are available on Amazon.

During World War II, millions of GIs had her photograph pasted above their beds. Nearly all knew her by her first name, yet today few are aware of the young woman who achieved the unique status as the only official poster girl of the U.S. Army.

Margie Stewart was a small-town girl who worked as a department store model before being discovered by Hollywood and acting in 20 movies. But her biggest claim to fame was attaining the rare status of having 94 million posters with her photo printed and distributed to American servicemen.

After graduating in 1937, Stewart attended Indiana University in Bloomington. Her allure was such that she was judged the campus’ most popular freshman co-ed in a contest. Her prize included a summer trip to Chicago where Stewart found employment as a model for an advertising agency. When she modeled for a women’s department store, she was paid $24 a week.

In 1941 Stewart moved to Los Angeles to further her modeling work and soon found a job in another major department store. But Stewart had more goals for her life than to be peered at by shoppers amongst racks of clothes.

When RKO Pictures offered her a trial contract and pay of $75 a week, Stewart accepted.

The first movie she appeared in was 1942’s ‘Here We Go Again.’ The following year she appeared in ‘Bombardier’, a film starring Pat O’Brien, Randolph Scott and Ann Shirley. Louella Parsons, motion picture editor of the International News Service, described Stewart as a ‘vivacious newcomer to the screen’. Stewart also appeared in Gildersleeve’s Ghost and was later cast in small parts in more than a dozen movies.

While working as a starlet, Stewart volunteered at the Hollywood Canteen, a place for Allied service people to eat. The club, organized by Hollywood actors Bette Davis and John Garfield, was run by volunteers in the film and entertainment industry, providing free food, dancing and entertainment to servicemen waiting to be shipped overseas.

Stewart waited on tables, cooked in the kitchen and helped with clean up. She also talked and danced with GIs, attempting to calm their fears before they were shipped out.

Throughout the war, Stewart participated in hospital tours with the USO in California, Texas, New Mexico, Oregon, and Washington to raise the morale of sick and wounded soldiers. During this time, she appeared in several war time instructional videos.

In an attempt to boost morale among troops, military officials came up with the idea of producing posters featuring one female who showed support for the war. Having seen Stewart in films and print ads, they asked her to pose to remind troops of the people at home wishing them well.

Stewart was not the typical pin-up model. Compared to the 1943 publicity shot of swimsuit-clad Betty Grable peeking coquettishly over her shoulder, Stewart appeared modestly dressed in the posters, giving her the image for many GIs of the girls they had grown up with.

American soldiers thought of the blue-eyed brunette as the sweetheart awaiting them at home (or wishing she was). When her wide eyes looked imploringly at the camera above the printed words ‘Please get there and back’, a sailor felt obliged to obey. Her look of concern on the poster stating ‘Be careful what you say or write’ went straight to the heart of airmen flying in the South Pacific and Europe.

Her admonition to soldiers to buy war bonds for a brighter future after the war encouraged Army troops to invest their money.

One prominent person objected to Margie’s popularity and nearly put an end to the posters. First Lady Eleanor Roosevelt believed the posters would make GIs homesick. When she petitioned to stop the printing and distribution of the posters, so many letters poured in from troops in protest that the order was rescinded. Stewart’s posters were put back in circulation.

After Germany’s surrender in May 1945, Margie received an official request from General Dwight D. Eisenhower to go to Europe to help with 7th War Loan Bond Drive. He had served as Supreme Commander of the Allied Forces in Europe for D-Day in June 1944. Eisenhower would later be voted as the United States President. Margie agreed to help the troops.

When Margie returned from Europe, she married and she and her husband returned to southern California where they became producers for the Hollywood Bowl. They were parents to one son and celebrated more than 50 years together before Jerry died in 2003.

Although Margie never had a major role in films, she played a significant part in reminding soldiers, sailors and airmen of the friends and families who awaited them at home. A display of some of the Army’s official pin-up girl’s personal items is on display at the Wabash County History Museum in Wabash, Indiana.