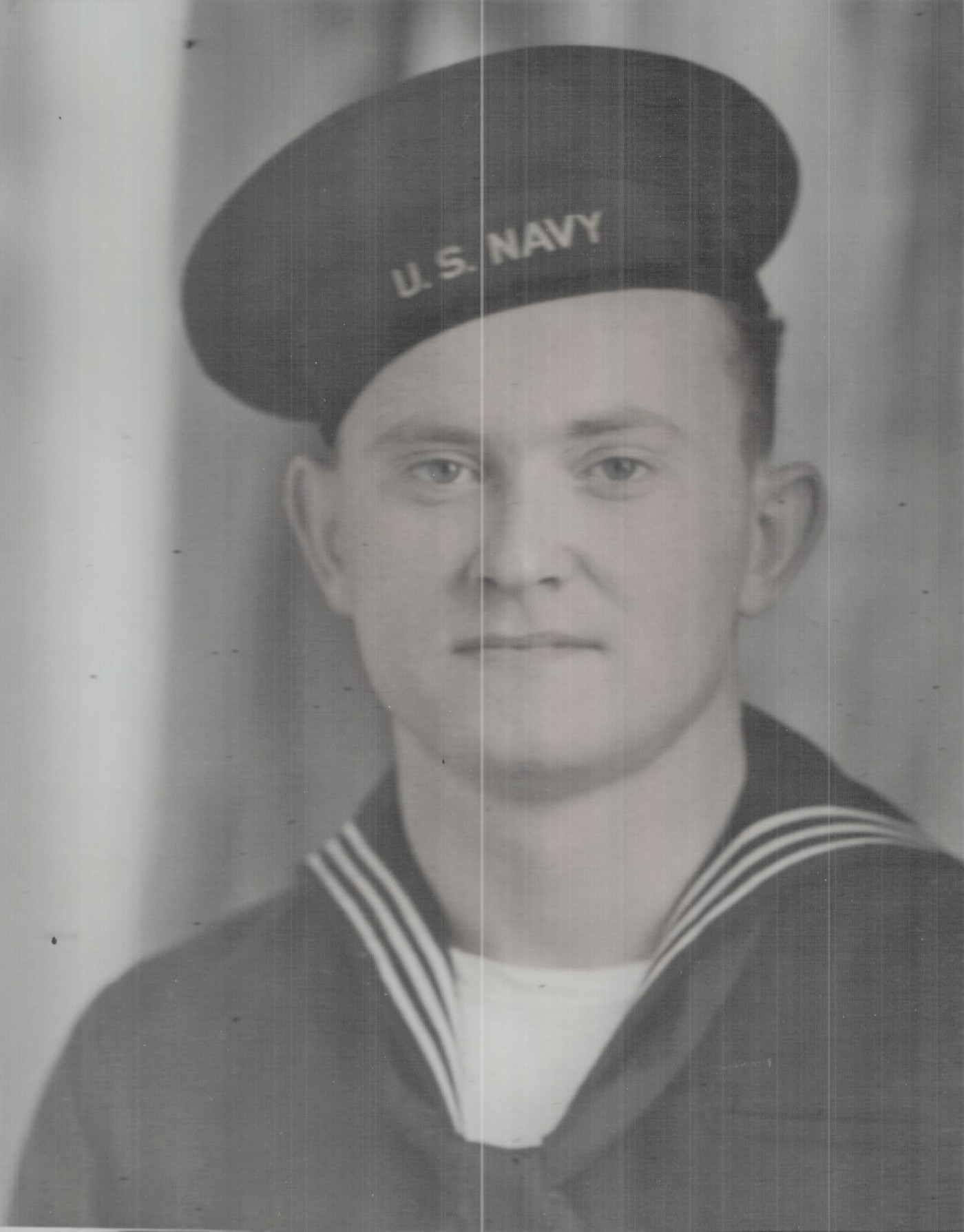 In honor of Military Appreciation Week, I’m posting daily stories of vets. Today is an excerpt of WWII Navy vet Louis Bowman. His full story is told in my book, We Defended Freedom: Adventures of WWII Veterans. There is a special opportunity at the end of this post — be sure to read to the end!

Thanks to all of our American veterans for their service to our country!

In May 1945, the USS Jobb DE-707 was floating in dry dock on the island of Moretai in Indonesia (then Dutch East Indies). Since fall 1944, the Jobb had participated in battles to gain control of the South Pacific.

That spring the Jobb had patrolled the waters of the Dutch East Indies island chain for Japanese submarines. The ship’s weaponry consisted of 5-inch and 20-millimeter guns, torpedoes, anti-submarine mortar, and depth charges. The ship had helped with conflicts at Borneo and Leyte in the Philippines.

On May 13th, Louis Bowman of Fort Wayne, Indiana, was working in the engine room performing electrical tasks when he dropped a glass bottle of sulfuric acid, its contents splashing over much of his body. He fell to the floor, writhing in pain.

The ship’s chief electrician found Bowman and washed the sailor’s exposed areas with water before carrying him to sick bay. Medical staff covered Bowman’s third degree burns with Vaseline. He was sedated to relieve the pain. No one expected him to live through the night.

Bowman’s death would leave his wife, Patricia, a widow and their infant son without a father.

Bowman had been born in Lawrenceville, Illinois. After graduating from Hammond Tech High School in 1938, he became a ‘gandy dancer’ for the Chicago and Eastern Railroad, helping to build the line.

He later moved to Fort Wayne and was there when drafted into the Navy in October 1943. After completing boot camp, Bowman rode a troop train to the East Coast where he was assigned to the Jobb as an electrician.

Now, Bowman survived his harrowing catastrophe in the engine room but required intensive medical care. He was evacuated to a hospital in the Philippines where prognosis was listed as critical.

Each breath he drew was a struggle. Doctors worried that his tonsils would bleed from the effects of the acid. At times pieces of skin came off.

Needing more extensive treatment, Bowman was shipped to the United States where he became a patient at a hospital in Chicago.

When Patricia Bowman arrived at the hospital, she didn’t know what to expect – the telegram notifying her of her husband’s injuries listed no details.

She was relieved when doctors believed Louis would make a full recovery.

Bowman was discharged from the hospital and Navy on January 31, 1946. He held the rank of Electrician’s Mate 3rd Class.

He and Patricia became parents to three children. He worked at International Harvester in Fort Wayne until retiring in 1974.

“I saw a lot of the world during the war,” said Bowman. “It was not all good, but it was a great experience.”

Listen to a short video of Louis Bowman tell about his military service on Youtube. Subscribe, give it a thumbs up and watch more of the dozens of vids I’ve posted.