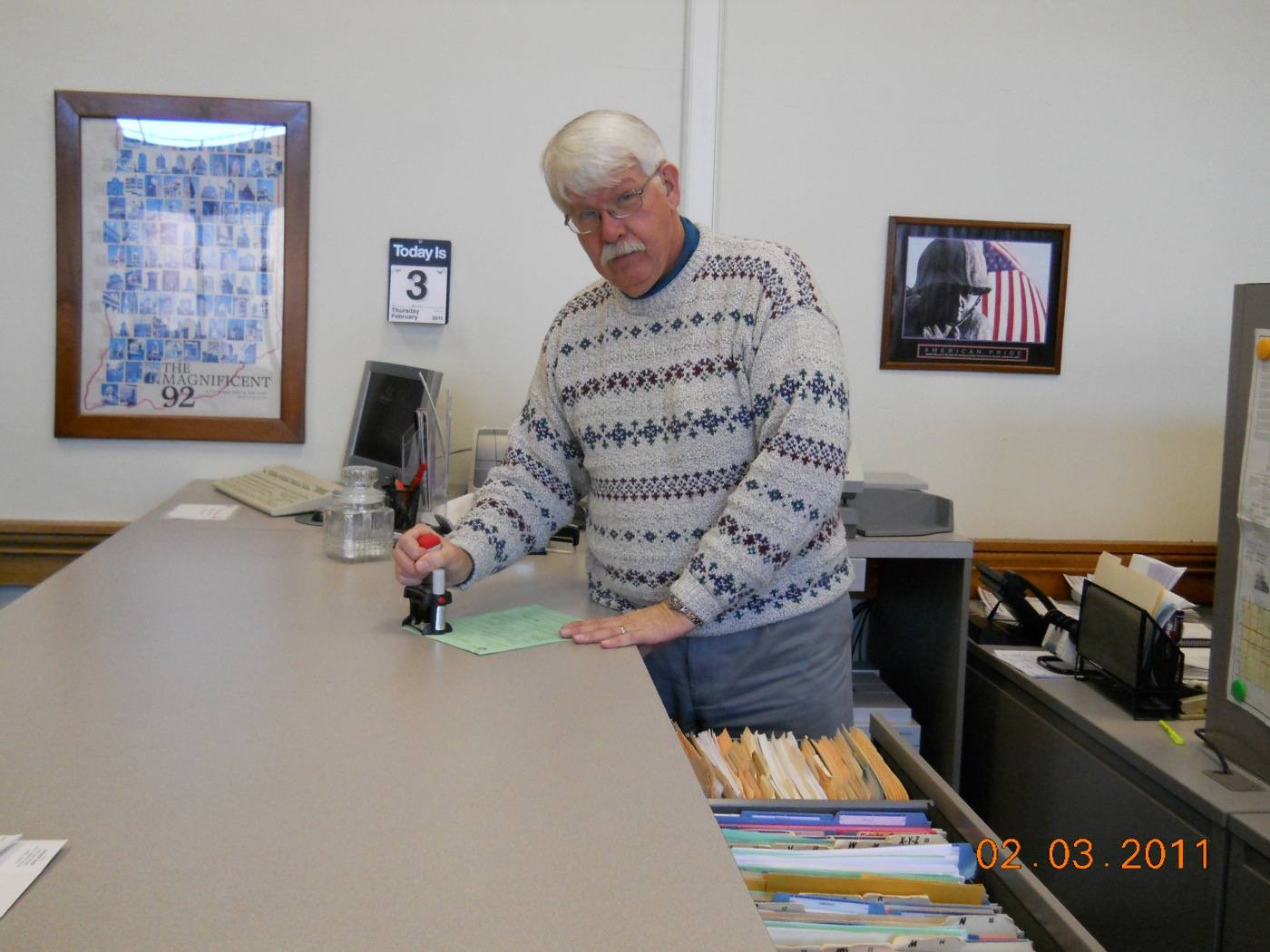 It’s amazing to me how a small, rural area that I write a weekly column for with the Ossian Sun Riser has so much diversity. From politicians to world-class gymnasts to octogenarians who sew dresses for orphans in Africa, there is always something newsworthy. This story is an example of someone using his skills to benefit others.

On January 1, 2011, Rick Smith of Tocsin was sworn in as Wells County Assessor. The man who had supervised 17 employees of the REMC offices in Columbia City for 11 years before retiring in August 2010 had no plans to run for political office. “I had thought I would retire and spend time with my grandchildren,” he said. He and his wife Mary have two children and three grandsons.

But when Republican party members asked him to run for the office of Assessor in late 2009, Smith agreed. “At one point in my life,  I didn’t want to campaign because campaigns can sometimes be brutal,” said Smith. “But at this stage of life, I decided to go for it.” After receiving certification as an appraiser and assessor –requirements for running for office of county assessor—Smith ran a successful county election in November 2010. For the past several months he has put in 40 hours each week, learning about his new position as county assessor.

Smith knows Wells County well, having lived here most of his life. He and his family moved from Arkansas to Indiana when Smith was five years old. His father worked for General Electric in Fort Wayne and his mother was a telephone operator in Uniondale. After graduating from Lancaster High School in 1966, Smith attended Harding University (then Harding College) in Arkansas where he studied accounting. In 1968 he married Mary Beauchamp, another Lancaster High School graduate.

Shortly after marrying, Smith spent two years with the U.S. Army, including one year in Germany. The Smith’s daughter was born in Frankfort.

Upon returning to the U.S., the Smiths returned to Wells County. Rick worked for a life insurance company in Fort Wayne, then the Fort Wayne Chamber of Commerce as Vice President of Operations. When Magnavox (now Raytheon) hired him, Smith considered moving to Fort Wayne for a shorter commute. In the end he decided to stay. “Mary and I didn’t want to be away from our grandchildren who live here,” he said.

Currently, as Assessor, Smith’s job is to correctly evaluate the value of local properties so they can be taxed for revenue according to county guidelines. “My department figures the market value of properties in Wells County,” said Smith. “When someone buys or sells a property, he fills out a sales discloser form. We use information from that data to figure the trend of property values within the county. We then apply that appropriately across the county to determine a mass appraisal, making allowances for certain neighborhoods that are subject to specific socioeconomic appraisals.”

One of Smith’s goals is to work with other county officials in the Wells County courthouse to reduce the efforts of tax payers who must work with county government. “Some people who come to the courthouse have to visit several offices to fill out paperwork,” he said. “Someone applying for a Homestead exemption must visit the assessor, then the recorder, then the auditor. It would be nice if tax payers did not have to spend so much time here.”

Smith said he depends much on his office’s deputies for helping him learn procedures. “Beth Singleton, Becky Johnson, and David Teeple allow me to look over their shoulders which I appreciate,” he said.

Despite being early in the learning curve of a new job, Smith feels good about his position as Wells County assessor. “I have good employees who are supportive and intelligent,” said Smith. “Plus I enjoy working with people. What better way to do that than to be in public service.”