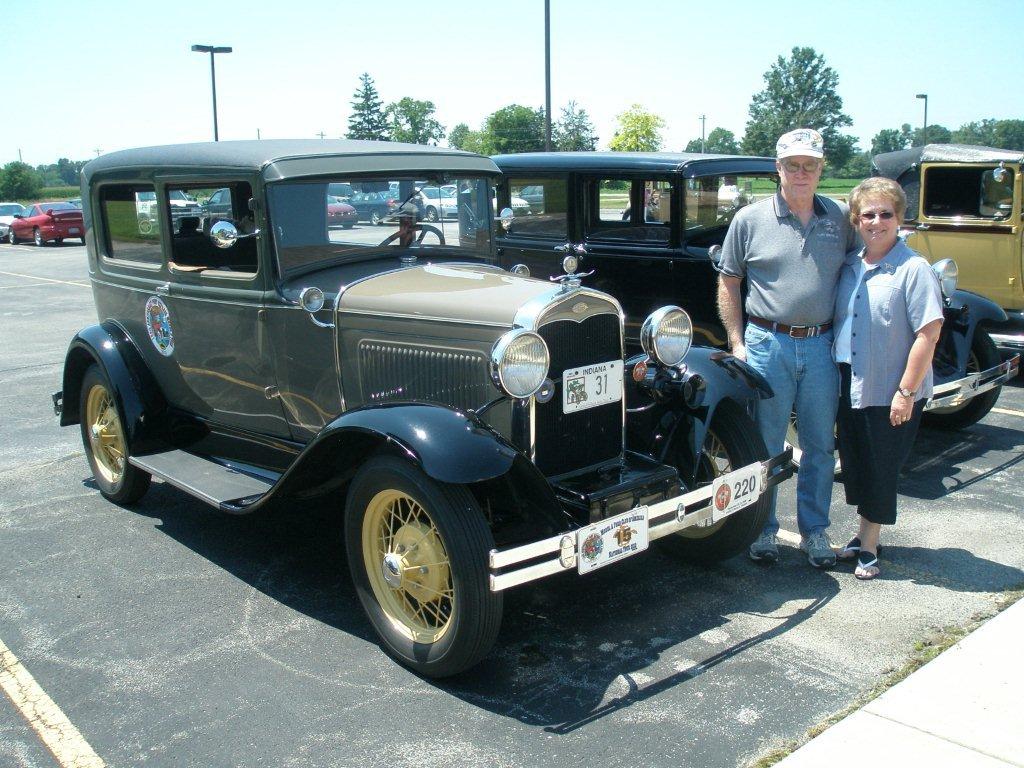 Here is another car profile of Model A owners Pam & Joe Baxter. They belong to the Old Fort Model A Club in Fort Wayne. Sweet car and people!

Joe Baxter grew up with a Model A in his family. Joe’s dad maintained the car himself, often with Joe’s help. Joe’s dad drove the Model A from 1928 until 1962, then it sat in a garage until 1978.  Years later, Joe restored the car and often assisted members of the Old Fort Model A Club, of which he and his wife Pam are members, with car maintenance problems.

Today, Joe Baxter battles a retinal disease which causes him near blindness. “I can see a little,” said Joe. The disease, which is inherited and progressive, does not keep him from continuing to work on antique cars with friends. Joe swears to the Model A’s dependability. “You have to maintain a Model A, but once you do, it’s totally reliable,” he said. “That’s why they’re still around. We’ve driven Model A’s on  trips to Colorado. When you run a car that’s 80 years old at 50 miles per hour for 10 hours a day, you see durability.”

The Baxters own a 1931 Tudor Sedan which they purchased in 1985 in Albion. Since then, they have driven it 15,000 miles. “We always thought we’d sell it eventually, but we never did because it is good for driving long distances,” said Joe. The car is painted greenish gray with yellowish cream wheels. “It has been modified with an overdrive, turn signals, and a CB radio to make it a touring car,” he said. “We run it on the highway, although we didn’t change the original wheels, tires, or  brakes.”

For some years the Baxters entered their 1931 model in competitions. One year at the Bluffton Free Street Fair car show it won a top award. Nowadays, Joe said he may still go to a car show with his Model A, but he doesn’t expect to win. “Our goal is to drive the car,” he said. “We’re not concerned about show car quality. We want it to look good, but we hate to put money into it every time it gets a stone chip.”

Pam Baxter, Joe’s wife does all of the driving of the Model A, including events with the Old Fort Model A Club. “The car club members think Pam is as good of a driver as any of the  men in the club who drive,” said Joe. “She never thought she could get used to the car’s electric starter and double clutch, but she did.” A few other women in the Model A car club drive cars, but few drive exclusively like Pam.

The Baxters were charter members of the Old Fort Model A Club which started in November 1984. Pam was the first president of the club. The Baxters have accompanied members of the Model A club on many group tours.

Joe Baxter especially enjoys riding in his Model A on road trips during the summer. “People who drive beside us look at the car and almost run off the road from staring,” he said. “Every place we  stop, people talk to us about the car. It’s a good conversation piece.”