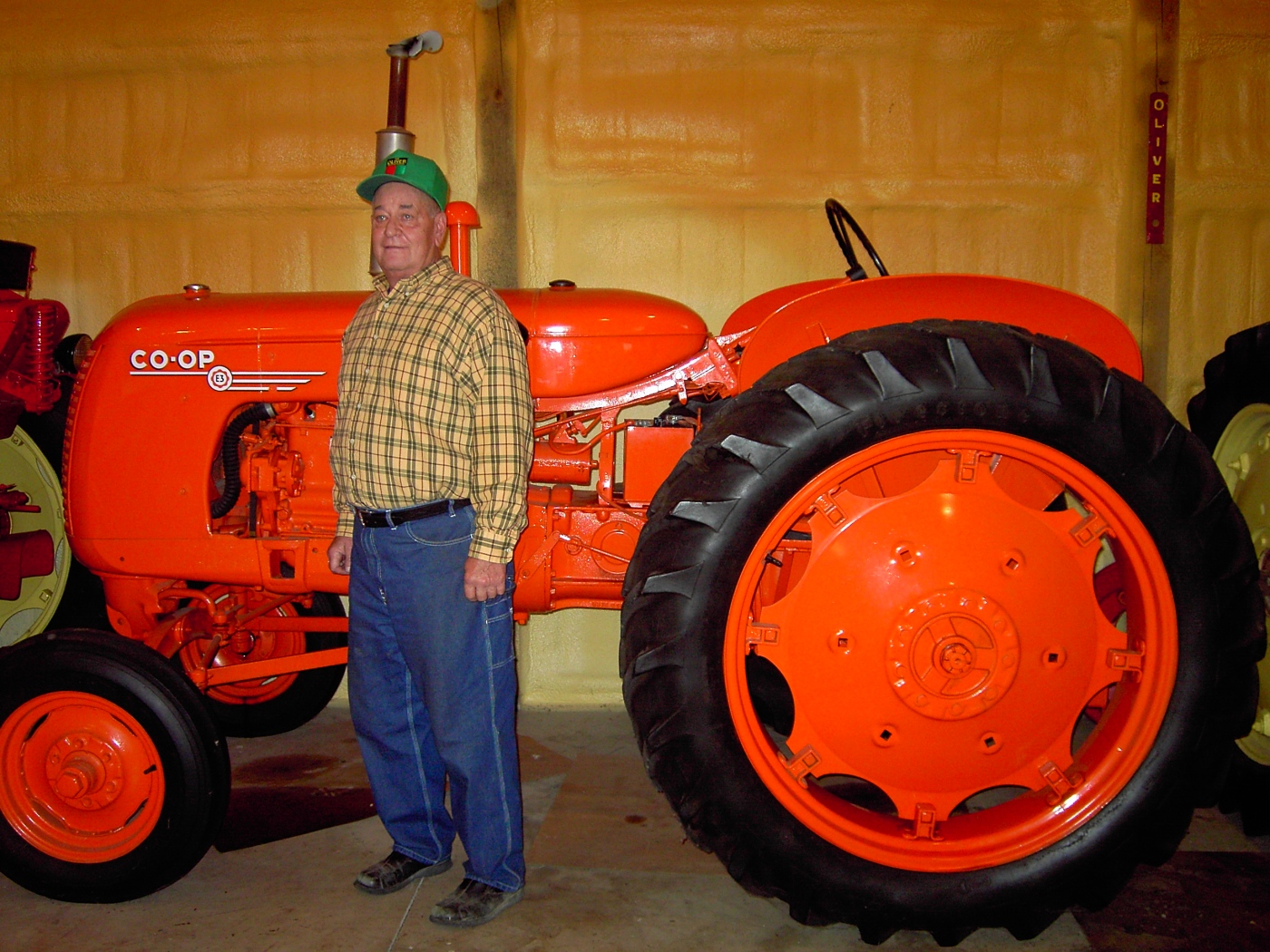 This past year I’ve enjoyed interviewing owners of antique/classic vehicles for Indiana Autos and RV’s Magazine. These people love their cars/trucks/tractors/other! Don Lehman is no exception! I like the vehicles too and have learned much about them. Several other classic car stories and photos are listed on this blog. Search “classic car”.

To some people’s way of thinking Don Lehman’s decision to purchase a 1968 Oliver 1650 tractor for his and his wife’s wedding anniversary might not have been advisable. How romantic is a tractor?

According to Lehman, the decision was a good one. “My wife, Jerri, loves all of my tractors,” he said. “All” can be understood to mean seven antique tractors that Don Lehman owns and maintains as a hobby at his home outside of Craigville.

“Jerri supports me in this,” he added. “Not only does it cost us to fix up each tractor, but she drives the tractors in parades.”

Lehman began his hobby in 1995 when he purchased a 1950 Cockshutt 40 from a neighbor. “It was in three pieces when I brought it home in January,” said Lehman. By April, with the help of a friend, the tractor was in good shape. Lehman displayed it at an antique show in August.

Cockshutt was part of a farm implement company based in Canada. Other company brands included Minnesota Moline and Oliver. “The company owners thought they’d go big with these brands,” said Lehman. Sadly, the company went  bankrupt in the 1970s.

Lehman restores the vehicles himself. Working full-time at Bunge in Decatur does not allow him much time to devotion to his hobby, but Lehman refuses to hurry the restorations. “I never set a time limit on finishing a project,” he said. “If I rush, it’s noticeable. Instead, I take my time and do it right. If I don’t get it done, there is always another day. I have more fun that way.”

Lehman searches for parts to restore his antique vehicles on Ebay and among collector clubs. Lehman also meets fellow antique tractor enthusiasts at the Wheels of Yesteryear Festival held in Bluffton each August. “It’s nice to share parts with people who attend,” he said. “This kind of hobby takes a tremendous amount of effort. It’s fun to talk with people of the same interest.”

While not a fan of tractor pulling contests, Lehman has attended antique tractor pulls. “I learn something with each project,” he said. “It requires much patience.” Lehman has even attended Cockshutt conventions. “It’s a family-oriented hobby,” he said. “My wife’s nephew has painted my tractors and the vendors I purchase parts from and people met through festivals and contests and conventions become friends.”

He may have established a self-imposed limit to his collection, however. “Seven tractors is enough for awhile,” he said. “The money to invest in them only goes so far. I’ve had fun with them, but we can only drive one per person at a time.”