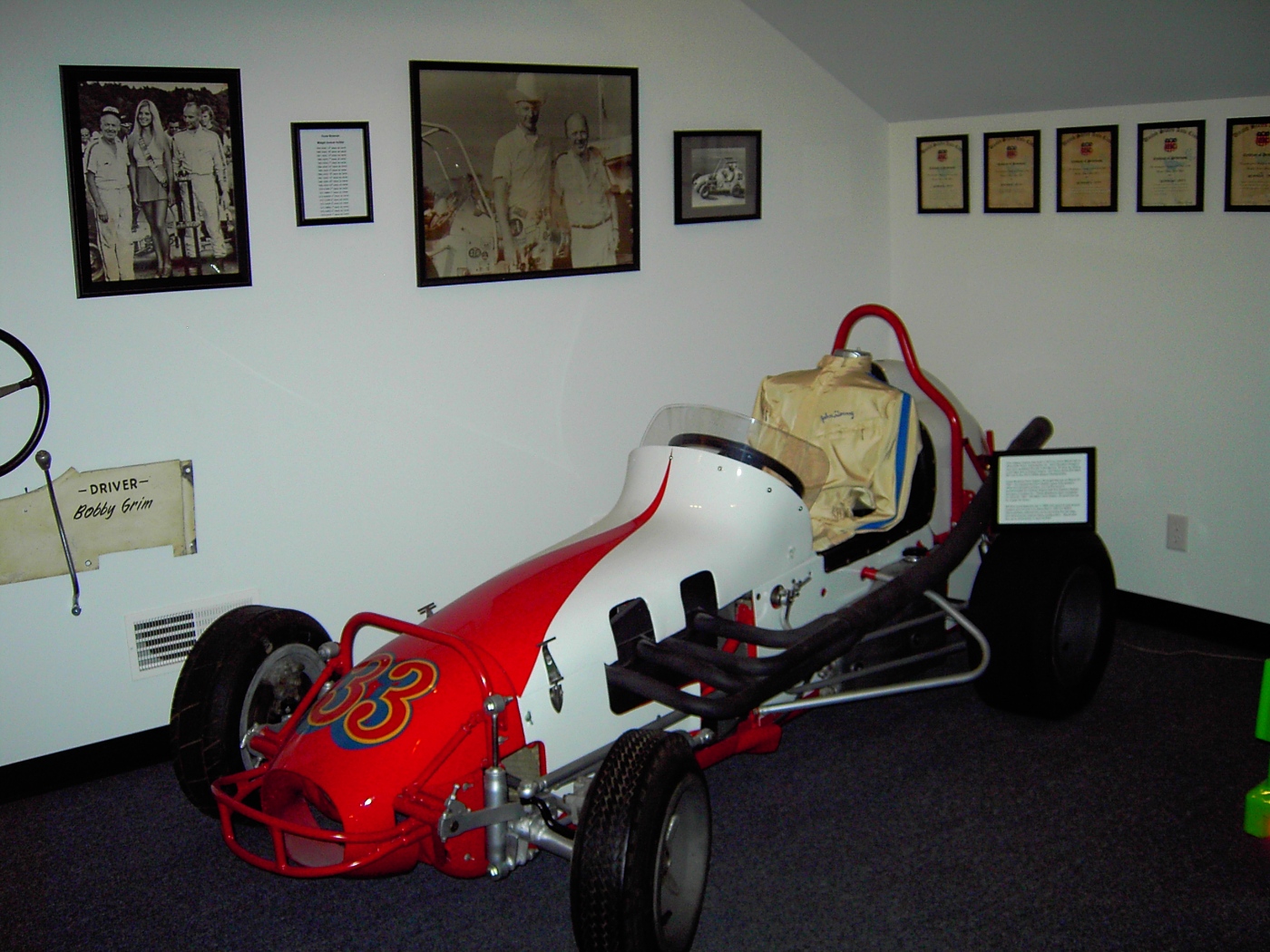 Writers learn to follow leads for stories. I wrote this article about Scott Elzey for Collector News magazine after a friend had told me about Mr. Elzey’s tree with a bicycle hanging in it at the end of his lane to his home. Yes, a bicycle hangs among the branches of his big hackberry tree. How did it get there? Mr. Elzey put it there! Then Mr. Elzey took me for a ride in his airboat on the Wabash River- that became an article for the Ossian Sun Riser.

After interviewing Mr. Elzey about his bike, he took my husband and me to his man-cave —the restored loft of his barn he has converted into a racing fan’s dream. Doesn’t this look like a great place to relax and spend time with friends? I wrote a different article about his love for collecting racing memorabilia for the News-Sentinel newspaper.

As a teen during the late 1960s, Scott Elzey of Uniondale, Indiana, accompanied his grandfather Coxie Bowman on weekend racing trips across the state of Indiana and into the eastern half of the United States, as well as Canada. During the week, Bowman operated a Texaco gas station in the small town of Ossian, Indiana. Bowman might have appeared to be content earning a living at sedately filling the gas tanks of cars. But on the weekends he wanted high speed, excitement, and high stakes. He raced midget cars.

Though small in size, midget cars could reach speeds exceeding 100 miles per hour. Prizes were set accordingly as midget race winners earned $800-$1000, an enviable amount in the years following the Depression. “Grandpa started racing in the 1940s and continued for 30 years,” said Elzey. As he watched his relative race in nearly every state in the nation – 43, to be exact — Scott Elzey gathered racing ticket stubs and other racing souvenirs that represented life on the racing circuit.

Today, those ticket stubs and dozens of other racing memorabilia are part of a collection Elzey has displayed at his farm outside of Ossian. The items are not in Elzey’s home, but in his barn’s hayloft. Rid your mind of cobwebs and dust motes. There’s nary in sight in this loft that is covered with drywall and adorned with carpet, plush sofa, big screen TV, and custom-made bar.

It seemed natural with Elzey’s collection of racing items to design his retreat with a racing theme. As Elzey began to collect larger car parts at Internet sites, he initially stored the items in the century-old house he and his wife, Deanna, had remodeled. He knew the day would come when he would need more space to display them. In 2006, they designed a floor plan to convert the hayloft to a game room to accommodate Scott’s racing collection.

Among the items he has collected over the years are two midget race cars his grandpa raced in. The midget chassis that sits on the loft floor was built in 1972 in Indianapolis, Indiana. After purchasing the car in 1987, Coxie Bowman lowered the front chassis, gave it the present red and white paint scheme and the number “33”, and cut the hood to accommodate the engine with the lowered chassis.

When floor space in the loft became too tight to accommodate the second midget car, it was no problem. Elzey hung the remaining car, one Coxie Bowman had built, from the ceiling.

That’s not the only large item suspended from the ceiling in Elzey’s loft. A 12-foot hydroplane racing boat hangs in one corner. Although no Elzey family memories are attached to it, it is present because it upholds the room’s racing theme.

A third midget, partially completed, is perched atop Elzey’s stairwell leading to the loft. According to Elzey, this car is unique. “Grandpa was building that car when he died,” he said. “It had an independent front suspension, which was later outlawed by various midget racing associations. And the driver sat on the left side of the engine, not behind it and not on the right side, as all the other cars were set up. Sadly, the car was never finished so these technical innovations were never tested.”

Random car parts like sheet metal from race cars are tacked to the walls, along with racing posters and framed black and white photos of Grandpa Bowman. In several he is standing beside one of his midget cars after winning a race. He placed in dozens of races during his lifetime.

Elzey completes the racing theme with National Hot Rod Association drag racing lights, which flash red, yellow, green, adding pizzazz to the ‘man-cave’ when plugged into an outlet. An antique racing car steering wheel, brake lever, and fuel pump, the type used when fuel was pumped by hand, hang on a wall. A nearby shelf holds helmets from Indianapolis racing driver Bobby Grim and others. 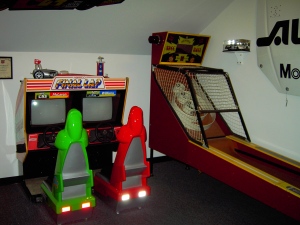 Just to make sure no one gets bored Elzey added arcade games in keeping with the racing theme. “We always had a game room in our home with pool table and pinball machines while I was growing up,” said Elzey. “I developed a love for games from my father.”

Grandpa Coxie Bowman passed away in 1996. He never saw his grandson’s eclectic display of racing memorabilia. But he might have suspected his influence on the younger man as in 1980, Scott Elzey began attending major racing events. So far, he has witnessed 46 events, including the Indianapolis 500 Race, NASCAR and Formula 1 races. He still attends midget races in Fort Wayne. Of course, the ticket stubs become a part of the collection.

At this point Elzey’s hayloft/game room looks filled with racing items. Who knows? If Scott Elzey continues to buy racing items, he may need to find another farm building to convert.