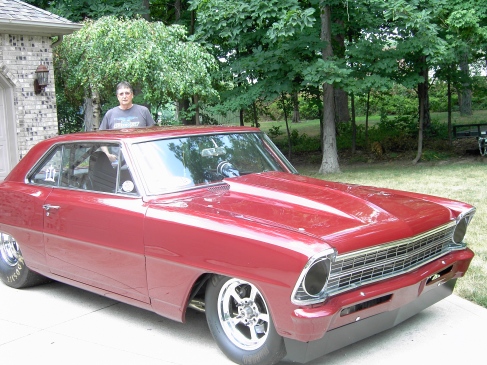 “It’s always been speed for me,”  said Les Claghorn of Bluffton. Claghorn owns a 1967 Nova he purchased in 1991 from a man in Pennville, Indiana. “It was an old race car,” said Claghorn.

Claghorn had owned a 1967 Nova in high school. Perhaps in memory of his and the car’s younger days, he converted his Nova to a race car in 2004.

Claghorn installed a bigger fuel pump, stock suspension, rebuilt transmission and power glide 2-speed. It has a scatter shield and diaper under the oil pan. It sits low to the ground for better aerodynamics. He estimates the car which he painted ‘Red Corvette Garnet’ has 600 horsepower and can get up to 150 miles per hour. The Nova weighs 2,600 pounds.

Claghorn has also raced at Milan Dragway in Milan, Michigan, and at Osceola Dragway in Osceola, Indiana. “My wife says I’m too old to race,” he said. “But when I’m wearing my 5-point harness, I’m safe because my arms can’t come out.” He has never had an accident while racing.

While speed is important to Claghorn, winning is no longer his objective as it was when he first converted the car. “I don’t win races anymore,” he said. “My reflexes are too slow. I still have fun.”

This article was published in IN Autos and RVs magazine.