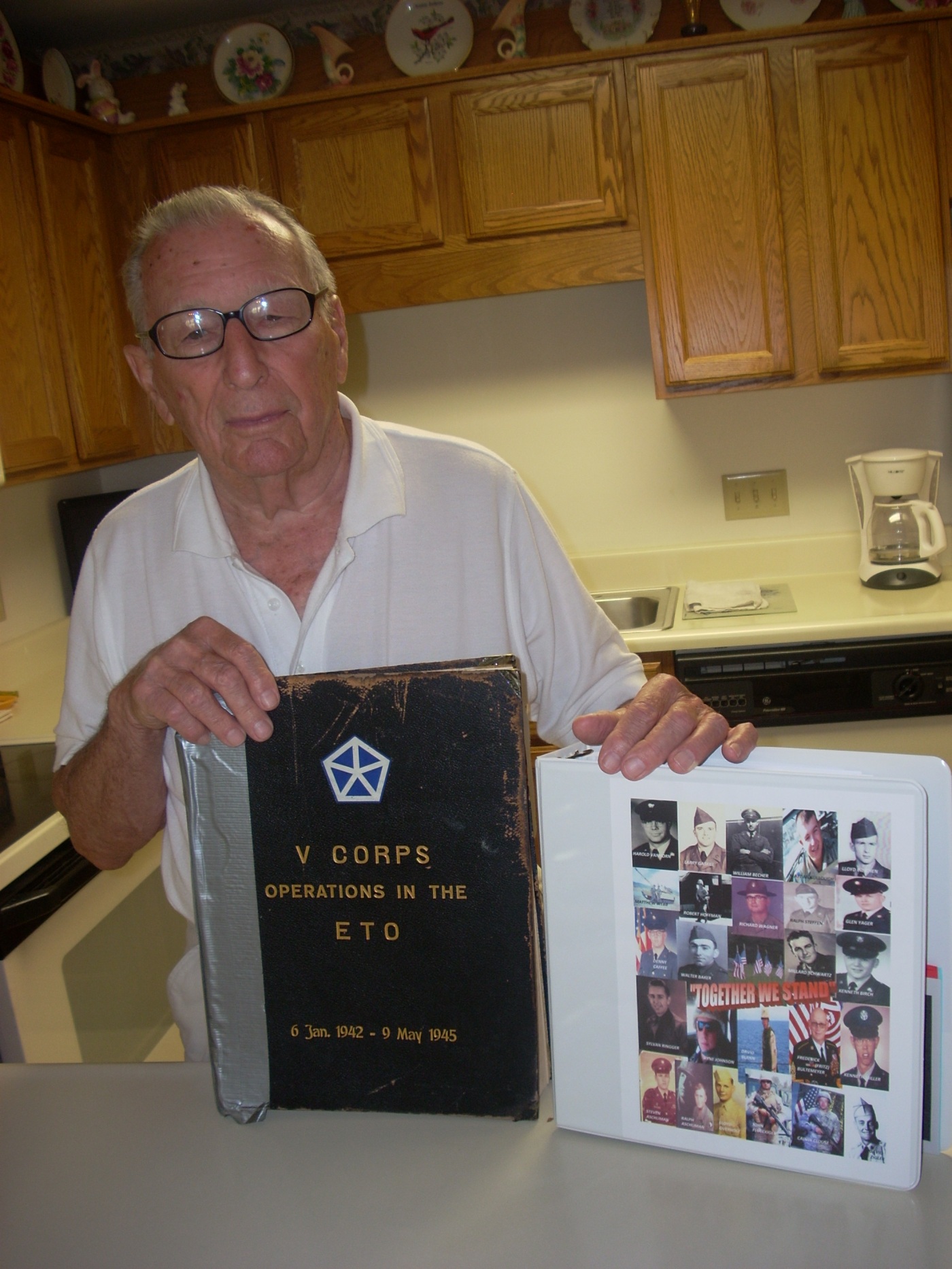 My Vet of the Week is Vernon W. ‘Bun’ William Affolder of Decatur, IN. Mr. Affolder died on Monday, Jan. 20, 2014. His birthday would have been tomorrow.

I interviewed him in his home three years ago. He became emotional about several parts of the war that were still very real to him. That taught me decades of time doesn’t erase memories of the horrors of war.

We need to support our vets with patience and understanding.

Thanks, Mr. Affolder, for your service. Rest in peace.

Note: This story is similar to those found in my book, World War II Legacies: Stories of Northeast Indiana Veterans.

As part of the first group of soldiers who left Decatur, Indiana, to serve as soldiers in WWII, Vernon ‘Bun’ Affolder never dreamed his military career would be so eventful.

Affolder was born in Van Wert, Ohio. He moved with his family to Decatur in 1927, graduating from Decatur High School in 1937. He worked at a local hardware store until 1941 when he got a notice from the United States Army. “They drafted me, then told me to go home,” he said. The Army did not forget Affolder. In January 1942 he and other young men from Adams County were sworn in as American soldiers.

Assigned to the infantry, Affolder completed basic training at Camp Shelby in Hattiesburg, Mississippi. He and thousands of other troops learned to shoot and hike through miles of poison ivy-infested weeds carrying heavy packs. Affolder was so sunburned by the time his parents visited him in 1942, they didn’t recognize him.

Affolder transferred to Camp Beauregard in Pineville, Louisiana, where he worked in the supply room. Thanks to his proficiency at typing due to a course in high school, he was sent to the Army surgeon’s office. “Because I worked for the Army surgeon, I wore a red band on my arm and a red cross on my helmet,” he said. “But I did not administer medical aid. My only job was to distribute supplies from the Surgeon’s office.”

Within months Affolder was aboard the Queen Elizabeth, along with thousands of other American soldiers, bound for Europe. “At the back of the boat were 52-gallon drums,” he said. “They hid depth bombs which were designed to go underwater and sink German submarines.”

Staff Sergeant Affolder spent 13 months in Bristol, England, working in the 5th Corps Headquarters. His commander was in charge of all field hospitals and aide stations. Affolder liked record keeping and working with the four officers and six enlisted men assigned to his office.

Living among the British was educational. “A bulletin board in the city park listed announcements about the war,” he said. “Despite the ‘loose lips sink ships’ saying, we knew if you wanted to know something about the war, ask a Brit!”

In June 1944, Affolder’s unit traveled to a place in France called Omaha Beach. At 0900 hours on June 6 (a day later than originally planned, due to inclement weather), thousands of Allied landing crafts dropped American and British soldiers into the waters near the edge of the shore. The intent of the Allies was to storm the beach and run off the firing Germans.

The Germans had placed big logs on the shore close to the edge to prevent Allied landings. “They shot big 88 shells at us,” said Affolder. Chaos reigned for hours as the Allies struggled to take the beach. Affolder and thousands of other American soldiers were thrust into a battle they had been ill-prepared for, but they fought valiantly.

When a shell blew off the leg of an American soldier, Affolder, standing nearby, was placed in a dilemma. As an aide to the Army surgeon, he wore an arm band indicating his connection with the medical office, but he had no authorization or training to administer aid.

“The other soldiers standing there thought I should try to help the wounded soldier,” he said, “but I was only a supply clerk. I had not even been issued a gun.”

Affolder helped load fallen soldiers to the safety of the landing crafts. “They were mostly young guys around age 21,” he said. “They lay with their eyes open and arms outspread. I still have flashbacks of that time.”

By the following day, the Americans had gained a foothold of Omaha Beach. After the Germans retreated, Affolder resumed his work in the surgeon’s office. There he met General and future United States president Ike Eisenhower. “He was a wonderful guy,” said Affolder. “He talked to us about our work at Omaha Beach.”

For Affolder the tragedies of war were not over. In December 1944, during the Battle of the Bulge, he and other American soldiers nearly lost their lives as part of what became known as the Malmedy Massacre. “We pulled out of Malmedy, France, on December 16, the night before a German combat unit captured 84 American soldiers and shot them,” he said. “I think that was the scariest part of the war for me.”

Later that spring, Affolder saw the atrocities of Buchenwald concentration camp in Weimar, Germany, just weeks after its liberation in April 1945. “We saw the butcher block where German dentists had removed gold from prisoners’ teeth,” he said. “We also saw a guy with a wheelbarrow carrying the body of a dead soldier.”

By summer 1945, the Japanese had surrendered and the war was over. Due to the number of battles he had fought and length of time of service, Affolder was one of the first to be discharged. American soldiers were flown back to the States in C47’s planes. “There were no seats inside, but that left room for more of us GIs to get home,” he said. (Note: GI is abbreviation for ‘Government Issue’ and was a common nickname for American soldiers.)

Back in Decatur, Affolder resumed working at the hardware store before choosing to sell life insurance, a career he continued until age 85. He and his wife Phyllis met in 1941 while Bun was on furlough. Phyllis died in 1992. Affolder remarried Alice in 1995.

For his contribution to the war Affolder was issued a Bronze Star for bravery and acts of  meritorious service. It is the fourth-highest combat award of the United States Armed Forces.