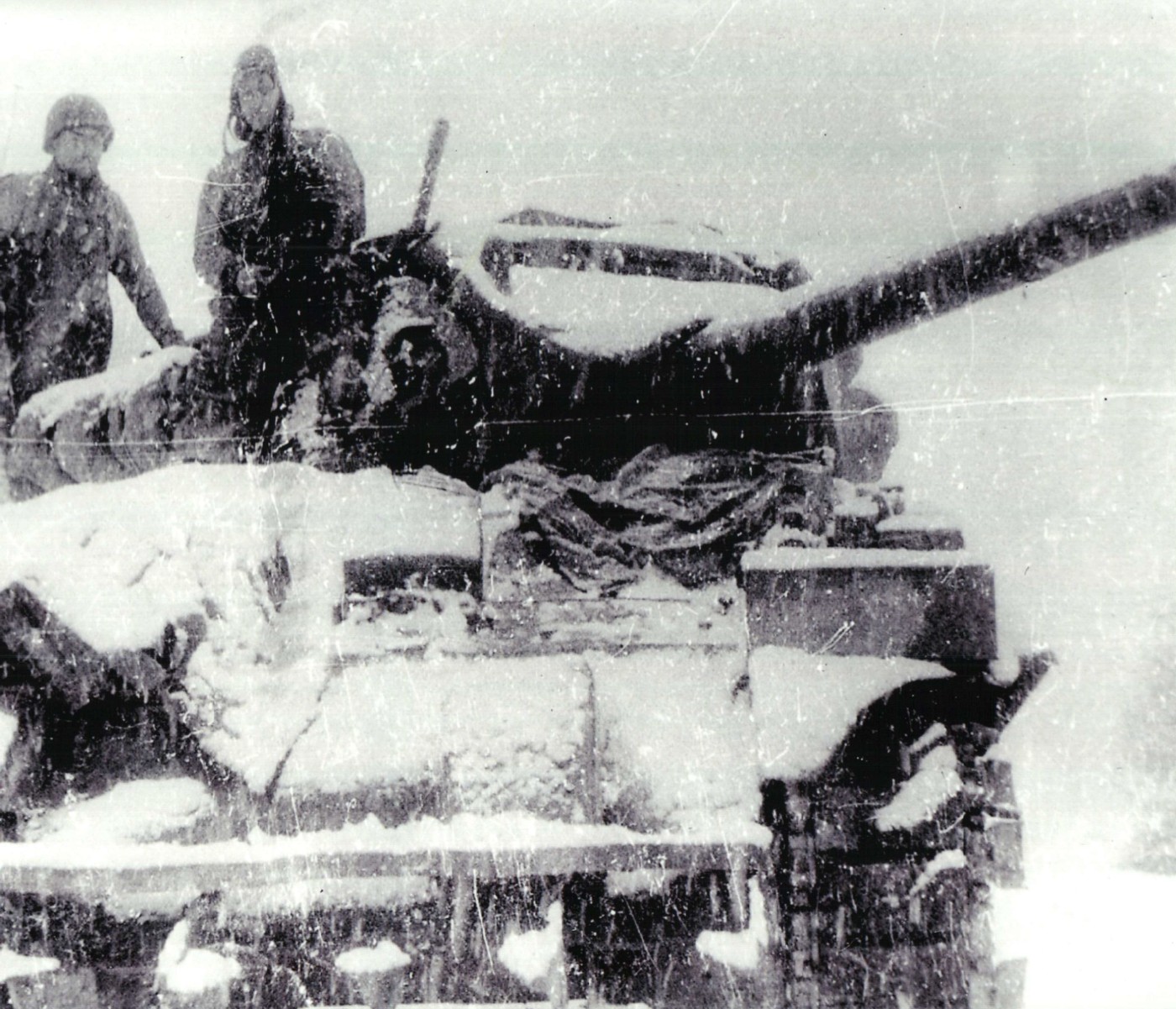 For seven days in December 1944 Allied forces fought with German forces at Bastogne, as part of the Battle of the Bulge. The Germans wanted to control the crossroads and the battle was hard fought. By December 27, Patton’s Third Army arrived and the besieged American forces were relieved.

Beresford Clarke of Fort Wayne, Indiana, spent his 21st birthday fighting the battle. “It was a tough fight,” he said. When Patton’s 3rd Army was relieved by another division, it returned to the town of Wadgassen on the Saar River.

Eight inches of snow didn’t lessen the fighting. For a week Allies hid in buildings, shooting at the enemy stationed behind fortified structures called pillboxes.

Each morning someone from Clarke’s unit drove a jeep back to the rear where Head Quarters was stationed. There the driver picked up food, ammunition, and orders of the day. Enemy snipers hid out in elevated locales, such as church steeples, so it was a risky venture. Clarke was often the jeep driver. “If I drove fast, I had a better chance of escaping!” he said.

Sleeping in foxholes under several inches of snow was the norm. Clarke saw many casualties. “It was difficult seeing people go down,” he said. 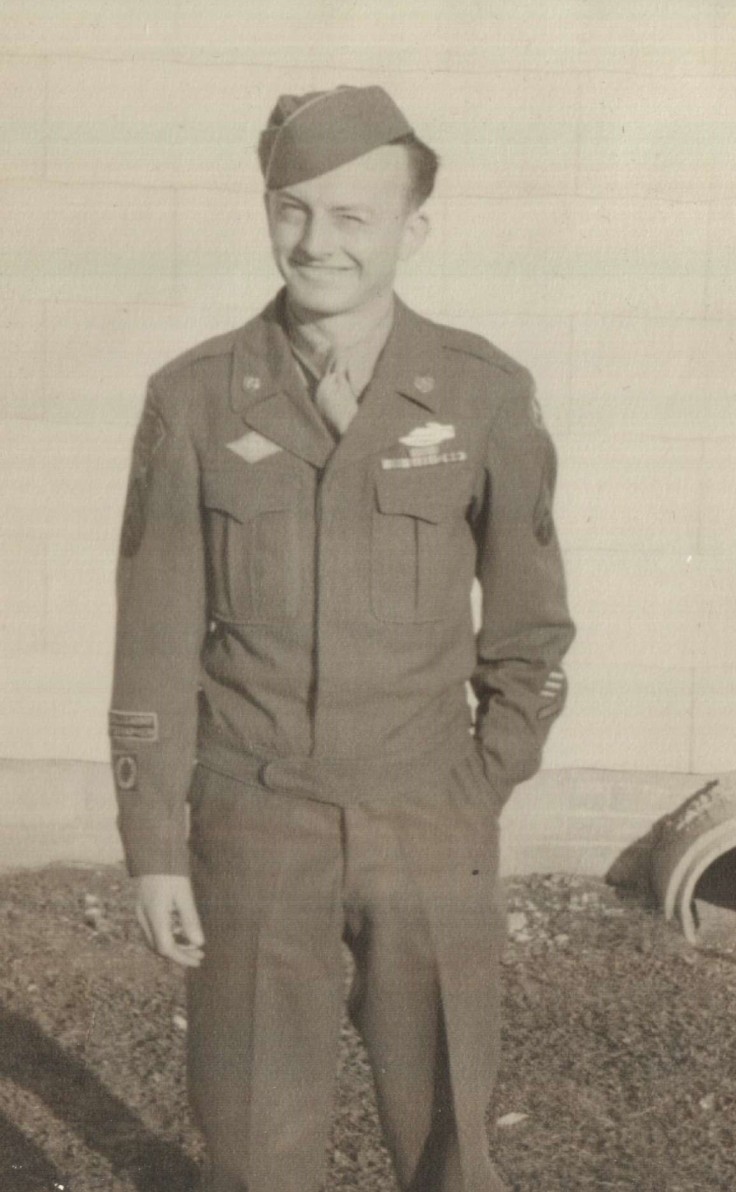 Clarke was born in 1923 in Evansville, IN. He graduated from Reitz High School in 1941 and completed two years as a mechanical engineering student at Purdue University when he enlisted in the US Army in 1943. “Every male who was my age would be drafted if not enlisted,” he said. “I could not swim so I didn’t want to go into the Navy.”

Clarke completed basic training at Fort Eustis, VA. “We trained on 120-mm antiaircraft guns, which were large cannons,” he said. “We also worked with rifles.”

After basic training, Clarke was sent to Army Specialized Training Program (ASTP) in Burlington, Vermont, for two months. It was a short-lived program based on the premise that the war might outlast the available number of college trained men needed to provide technical information. High school graduates who had tested at a certain level of intelligence were set aside for this program. By early 1944, the program was disbanded and the men re-assigned.

Clarke was assigned to the 26th Division, 328th Infantry anti-tank unit of Patton’s 3rd Army. After training in Columbus, SC, Clarke boarded a ship in New York City for Europe.

By now, it was early July 1944. The infamous invasion on Utah Beach at Normandy had occurred a few weeks earlier so Clarke and other troops went over the side of their LCI at Normandy with no opposition, though there was some trepidation. “The beach supposedly had routes cleared for mines which the Germans had put there,” said Clarke. “We hoped they got them all.”

Clarke’s unit camped in the fields of Normandy where cattle roamed and joined the fight in the liberation of the nearby town of St Lo. The city had already suffered an extensive attack by American troops during the Battle of Normandy. The city was bombed again by Germans in July. Gaining St. Lo would give Allied forces access to the opening of the Falaise Gap, a foothold to expel German forces from northern France.

Once St. Lo was secure, Allied troops proceeded along the Saar River in northeastern France. Clarke was driving a jeep with his platoon commander and a sergeant sat in the back seat using a 50-cal machine gun. Other soldiers walked along the road when Clarke saw one soldier take a direct hit. “His body was splattered across the road,” he said. “I vomited and my platoon leader did, too, but we kept going.”

The 3rd Army’s objective was to stop the German tanks. “There was a lot of fire from German tanks,” he said. “When their 88s came at us, they went by you or through you.”

The battle was made more difficult by the fact that the Allies often didn’t know their way. “The Germans reversed road signs so we could not depend on the signs to tell us where to go,” said Clarke. “Our military didn’t have good maps of Germany when the war started so we used some from National Geographic.”

At Metz, a city in northeastern France soldiers bunked down for the night, but were awakened and told to prepare to leave. Some troops boarded trucks while others prepared to walk to the small Belgian town of Bastogne. “We walked for two days in snow,” said Clarke.

During the spring of 1945, Allies prevailed along the Saar River, taking over towns along the way. “We told the Burgermeister (mayor) in each that they must hand over all weapons and all uniformed soldiers must surrender,” said Clarke.

In one village the Allies smelled something strange. Upon being questioned, one Burgermeister admitted to working with a Jewish concentration camp in the area. “We saw stacks of bodies,” said Clarke. “I couldn’t believe anyone could do what Hitler did and that other people could follow him.” The 3rd Army liberated the camp and left other Americans in charge. 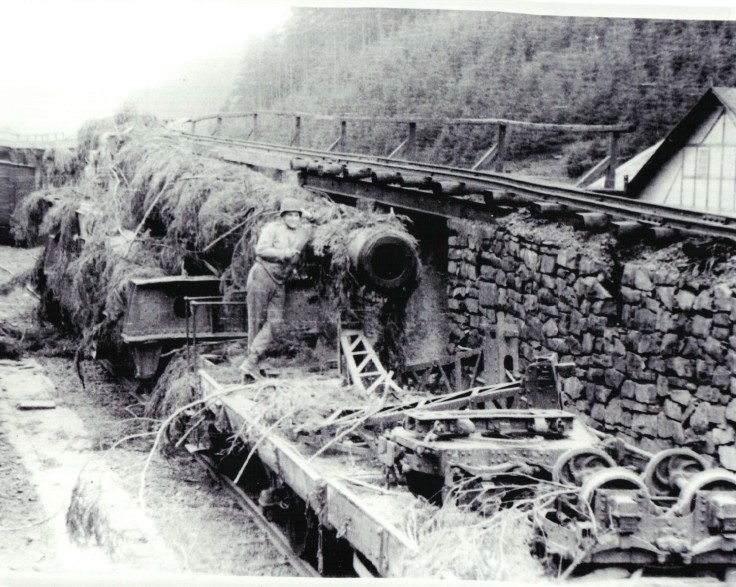 That was not the end of surprises. As the 3rd Army bedded in a nearby hay loft, soldiers felt lumps under the straw. When they pulled out parts of a Messerschmitt Bf 109, a German fighter aircraft, they discovered the barn was part of an underground aircraft assembly plant. Again, members of the Third Army remained behind to control the discovery while others proceeded through the area.

Having worked in a camera store before the war, he had applied to join the Signal Corps at the beginning of the war, but was not accepted.

After VE Day, the Army confiscated hundreds of rolls of film soldiers had shot during the war. Clarke’s interest in photography was honed when he received orders to join the 165th Signal Corps in May 1945.

Since the Civil War when it was first organized, the US Army Signal Corps had developed, tested and managed communications support for the command and control of combined arms forces.

While stationed in Czechoslovakia, Clarke and another soldier set up a dark room with chemicals and an enlarger. “Our job was to develop photos from 500 rolls of film,” said Clarke. The signal corps had been made up of men, mostly middle-aged, with experience in photography, even some from Hollywood. Clarke also shot photos of troops awaiting discharge.

When Clarke received his discharge a few months later, he was shipped from Marseilles, France, to the East Coast of the US, then Camp Atterbury in Indiana where he was discharged at the rank of T5 corporal. He returned home with several items from the war, including a German flag, German daggers, rifles, shotgun, pistol, knives.

Clarke graduated from Purdue in 1948 as a mechanical engineer. He worked in Fort Wayne. In 1953 he married and he and wife Lucy became parents to three children. 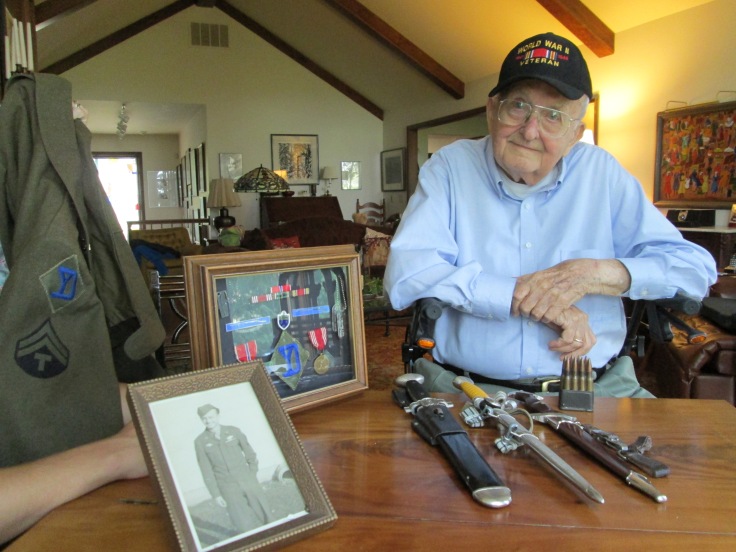 Clarke and family members have returned to Europe to trace his path as a soldier during World War II. Clarke participated in the Honor Flight of Northeast Indiana in 2013.

“It was an amazing experience to be a soldier during World War II,” said Clarke. “It was scary and challenging to watch those poor people being released from prison camps. I made it through the war without injuries. I feel very fortunate.”

This article first appeared in News-Sentinel.

Beresford Clarke died 10/23/15. I feel privileged to have had the chance to meet and interview him. Stories like this are available in my book, WWII Legacies: Stories of Northeast IN Veterans which can be purchased on this site’s home page and Amazon.