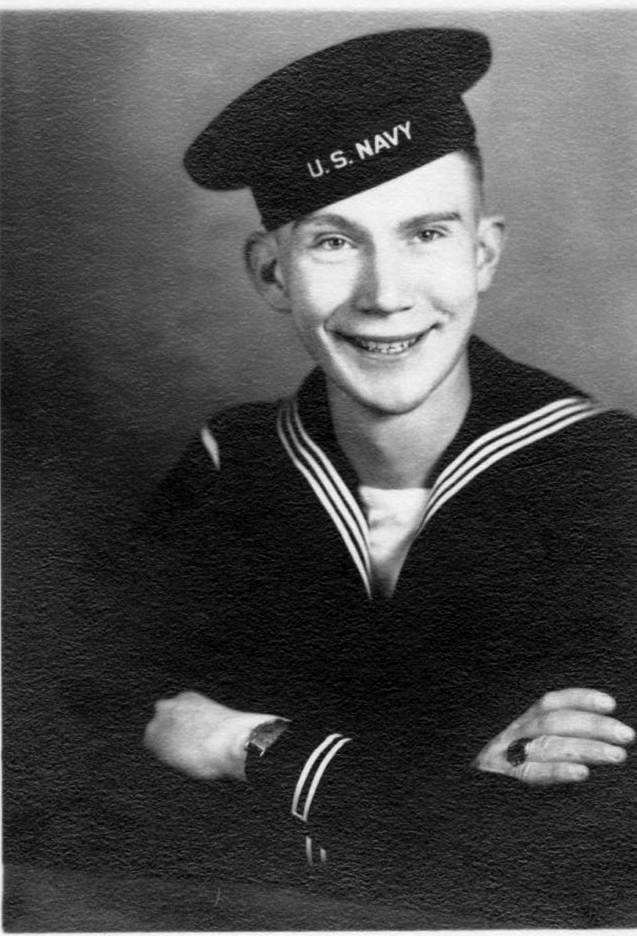 Most of us in northern Indiana recognize the name of Bob Chase as connected with WOWO radio. For 65 years, Bob Chase was an announcer for the Komet Hockey team on WOWO radio.

I had the privilege of meeting Mr. Chase — actually that was his radio name based on his wife’s maiden name — his real surname was Wallenstein — a few months prior to his death in November 2016. He was so friendly and hospitable. His dog (I forget its name) was in the room with us during the interview and sat at his feet. The phone rang three times. Each time he answered it calmly and I got the impression it rang a lot, due to his range of friends and family.

I knew his heritage included a father who fought in WWI and a son in Vietnam and grandsons in the Middle East. He was proud of his family’s military heritage and I was thrilled to add his story to my book.

Here is an excerpt to his story in They Did It for Honor: Stories of American WWII Veterans (available on Amazon):

Upon enlisting into the US Navy in 1943 at age 17 (his parents had given written permission as he was not yet 18 years old), Robert Wallenstein of Marquette, Michigan, was sent to Farragut Naval Training Station near Athol, ID, for boot camp. He passed mental aptitude tests being administered by the Navy. “They wanted to prepare pilots for flight training with courses in math and minor engineering,” he said. Wallenstein completed two semesters at Hobart College in Geneva, NY, but was dropped from the program, only to learn about yet another program in the Navy.

“They were looking for volunteers for a special project in naval intelligence,” he said. Wallenstein applied, though he was unsure what was involved. When a thorough government background check was completed on him satisfactorily, Wallenstein was sent to cryptography (working with codes) school in Washington DC.

Upon completing the course, he was assigned to a naval station on the island of Oahu. “We climbed down ladders to get inside a mountain near Wahiawa to decode messages,” he said.

Encrypted messages had extra letters and numbers at the front and rear to disguise their meanings. “When we typed messages in code, it formed five-letter groups,” he said. “We never wrote real words.”

After the war, Mr. Wallenstein participated in the Able and Baker nuclear bomb tests held at the Bikini Atoll. “We could see their eruptions from 30 miles away,” he said.

You can meet other WWII vets with fascinating stories at my book launch on Saturday, Nov 4, 2017, at Allen County Public Library, 900 Library Plaza, in Ft Wayne IN from 1-3pm. It will be a historic, memorable day with approximately one dozen vets in attendance! We’ll hope to see you there!