People from my church have been sharing Bible verses to help them through this challenging time with the Corona Virus. A friend said Psalm 91 was especially helpful to her.

That prompted me to pull out this story I wrote several years ago about that psalm after a medic from Desert Storm told me how it helped him at a certain time. The story was published in a book called Soul Matters for Men (Multnomah Press).

I hope this story blesses you at this special week as we approach the day honoring the Resurrection of our Lord Jesus Christ, while also in the midst of one of the most dreadful crisis our world has ever endured. The entire Psalm 91 is added at the end. I encourage you to pick one or two verses to memorize during this time to recite when stress is making it hard to sleep, breathe, and think clearly.

The photos do not represent anyone from the story but indicate the way our military has always had to endure stress, and especially medical personnel.

Please pray for our troops at this time and always. Thanks to every veteran reading this!

A succession of deafening explosions ripped through the night, awakening me from a fitful sleep. Immediately, I put on my gas mask and bolted from the cot to join other personnel at the barracks windows.

Black smoke and flying debris obliterated our view of the war-torn Kuwaiti desert. The cacophony of noise sounded different from other times when we had been fired at by one of Saddam Hussein’s low-flying Soviet scud missiles.

I was platoon commander of the Army National Guard medical unit stationed out of Iowa City, Iowa. Our unit had been deployed to Kuwait in January 1991 as part of a massive military buildup by the United States to combat Saddam Hussein’s invasion of Kuwait.

Our mission was to perform advance trauma life support, stabilize the wounded, and send them back to the MASH unit or field hospital in the rear. 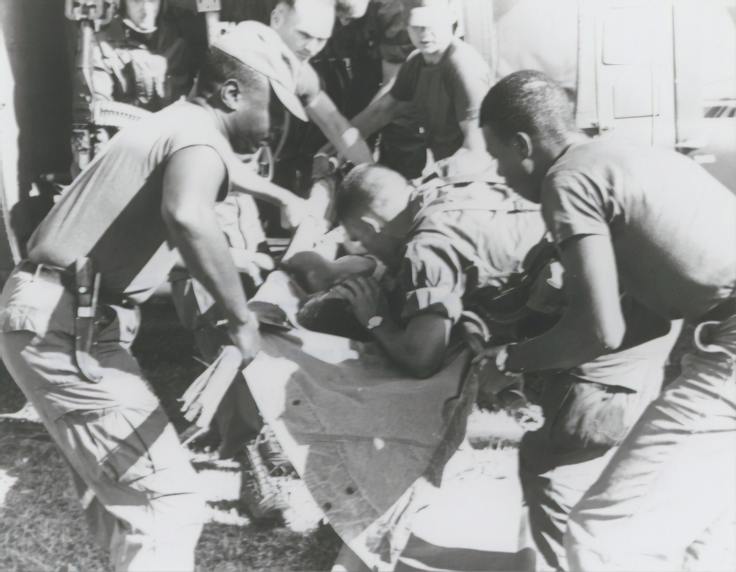 Later, we learned that a 17-foot Allied rocket, the Patriot, had streaked through the sky, breaking the sound barrier and blown away an incoming scud in a fiery collision.

It was history’s first wartime intercept of a ballistic missile. A television crew on the roof of a nearby building caught the event on film so that millions of American viewers could watch it.

We hadn’t been in the desert long when medical intelligence told us that, due to an increase in air strikes, we should expect 500 to 1,000 casualties a day.

The news, heat, stress of waiting, and our proximity to danger created a palpable tension within camp. It was my duty to maintain order. Thus far, I had done so, but wondered how long it could last.

As a Christian, I often sought help from the scriptures. Psalm 91 gave me strength and courage.

Vs.3 sounded as though it could refer to biological and chemical warfare:

“For it is he who delivers you…from the deadly pestilence…”

Verse 5: “You will not be afraid of the terror by night.”

I took that to mean the Scud missile attacks.

These words, written thousands of years ago, seemed to fit our 20th-century situation amazingly well. They never failed to assure me God was in control.

I had always believed everyone dealt with God in his or her own way. I never forced my faith on anyone. But as the days passed and tension grew, I questioned my motives.

Was I keeping silent about my faith out of concern for others? Or was I afraid of what others would think?

That night I realized it was the latter and I prayed for wisdom. 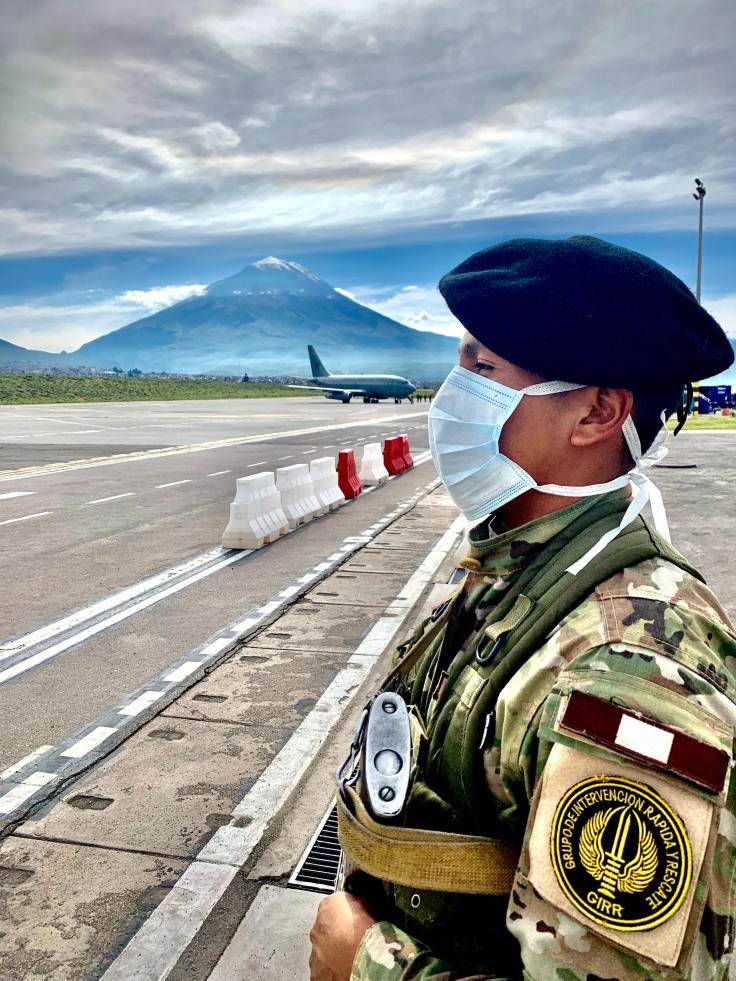 The next day, Bible in hand, I ordered the entire platoon to assemble in the mess hall.

“No one knows when this thing will end or if any of us will walk away from it,” I told them.

“I’ve been scared and think most of you have been too. But Someone greater than Saddam is watching over us right now, Someone who cares what happens to us. God, our Creator, loves us and is able to protect us.”

I read the 16 verses of Psalm 91. By then, they were so familiar I could have read them with my eyes closed. That day, however, they took on new meaning as my voice rang with conviction.

“He who dwells in the shelter of the Most High will abide in the shadow of the Almighty.…”

Afterward, I said a short prayer, then dismissed the platoon. It surprised me at how powerful God’s Word could be as several people thanked me for reading the Scripture.

During the next few days, soldiers read the New Testaments issued to them.

Two days later, 160 of us were sent to the front line to support the 3rd Artillery Division from 7th Corps out of Europe.

Dug in bunkers two kilometers behind the Iraqi-Saudi border, we waited for the 100-hour Ground War to start.

When it started on February 24, the number of casualties in our unit increased, but mostly as minor shrapnel injuries. We never had the hundreds of battle-related casualties that medical intelligence had predicted. 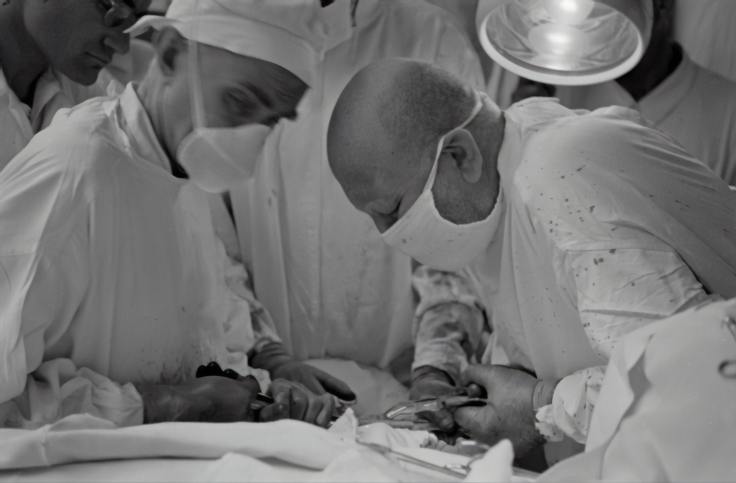 Allied forces called a truce with Saddam and we praised God that our entire unit had escaped with little injury.

A few weeks later, our platoon was returned to the States. After a warm reception from my family and period of rest, I resumed my private practice. Everything appeared to be the same in my life as it was before the Gulf War.

I began to pray with patients who were having a tough time. I shared with colleagues the things God was doing in my life. When one doctor friend left the States to begin missionary work in Africa, I read Psalm 91 at his going-away party.

The Gulf War was a difficult time of separation for my family and me. But if given the opportunity to serve my country overseas again, I would.

I believe in the ideals this country stands for and will do everything I can with God’s help to see they are carried out in other nations.

1 Whoever dwells in the shelter of the Most High
will rest in the shadow of the Almighty.
2 I will say of the Lord, “He is my refuge and my fortress,
my God, in whom I trust.”

Surely he will save you
from the fowler’s snare
and from the deadly pestilence.
4 He will cover you with his feathers,
and under his wings you will find refuge;
his faithfulness will be your shield and rampart.
5 You will not fear the terror of night,
nor the arrow that flies by day,
6 nor the pestilence that stalks in the darkness,
nor the plague that destroys at midday.
7 A thousand may fall at your side,
ten thousand at your right hand,
but it will not come near you.
8 You will only observe with your eyes
and see the punishment of the wicked.

9 If you say, “The Lord is my refuge,”
and you make the Most High your dwelling,
10 no harm will overtake you,
no disaster will come near your tent.
11 For he will command his angels concerning you
to guard you in all your ways;
12 they will lift you up in their hands,
so that you will not strike your foot against a stone.
13 You will tread on the lion and the cobra;
you will trample the great lion and the serpent.

14 “Because he[b] loves me,” says the Lord, “I will rescue him;
I will protect him, for he acknowledges my name.
15 He will call on me, and I will answer him;
I will be with him in trouble,
I will deliver him and honor him.
16 With long life I will satisfy him
and show him my salvation.”

2 thoughts on “Prescription for Stress: Psalm 91”