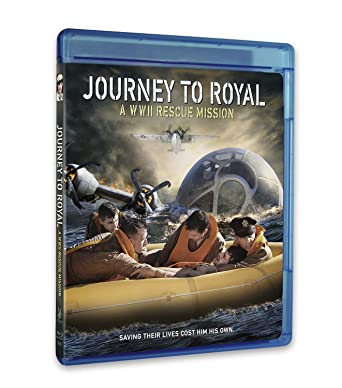 Have you seen the new docudrama ‘Journey to Royal’ that was released on Amazon in February? It includes stories of World War II veterans involved in rescues (or their families in some cases).

While the film highlights the 4th Emergency Rescue Squadron in the South Pacific in World War II, it also includes an interview with Army Air Corps flight engineer Ed Goetz.

During my interview with Ed a few years ago, he told me in detail of how he and his crew had to bail out over the Pacific during a bombing mission. They were not attacked by the enemy; their propeller simply went haywire. They were in the dark and barely made it out of the plane before it exploded.

We were a little disappointed that Ed’s story was not the main feature, but he did a great job speaking about his service.

Ed lived to be 100 in February and saw the film before he died. He was so proud of it as was his family.

The film features stories of PBYs, rescue subs, downed airmen and survivors of torpedo and kamikaze attacks. It was the Navy and Army Air Corps crews just doing their jobs, but how awesome it all looked.

The film is 90 minutes in length and every minute is well-done and impactful.

My husband (a retired Air Force airman and World War II enthusiast) and I were often on the edge of our seats, especially with the historic footage.

Journey to Royal is a top-notch depiction of what it was like for young flight crew members in World War II. It was risky and often death-defying.

The film is available to buy or rent on Amazon. It would be a great family resource to build patriotism and provide good role models.