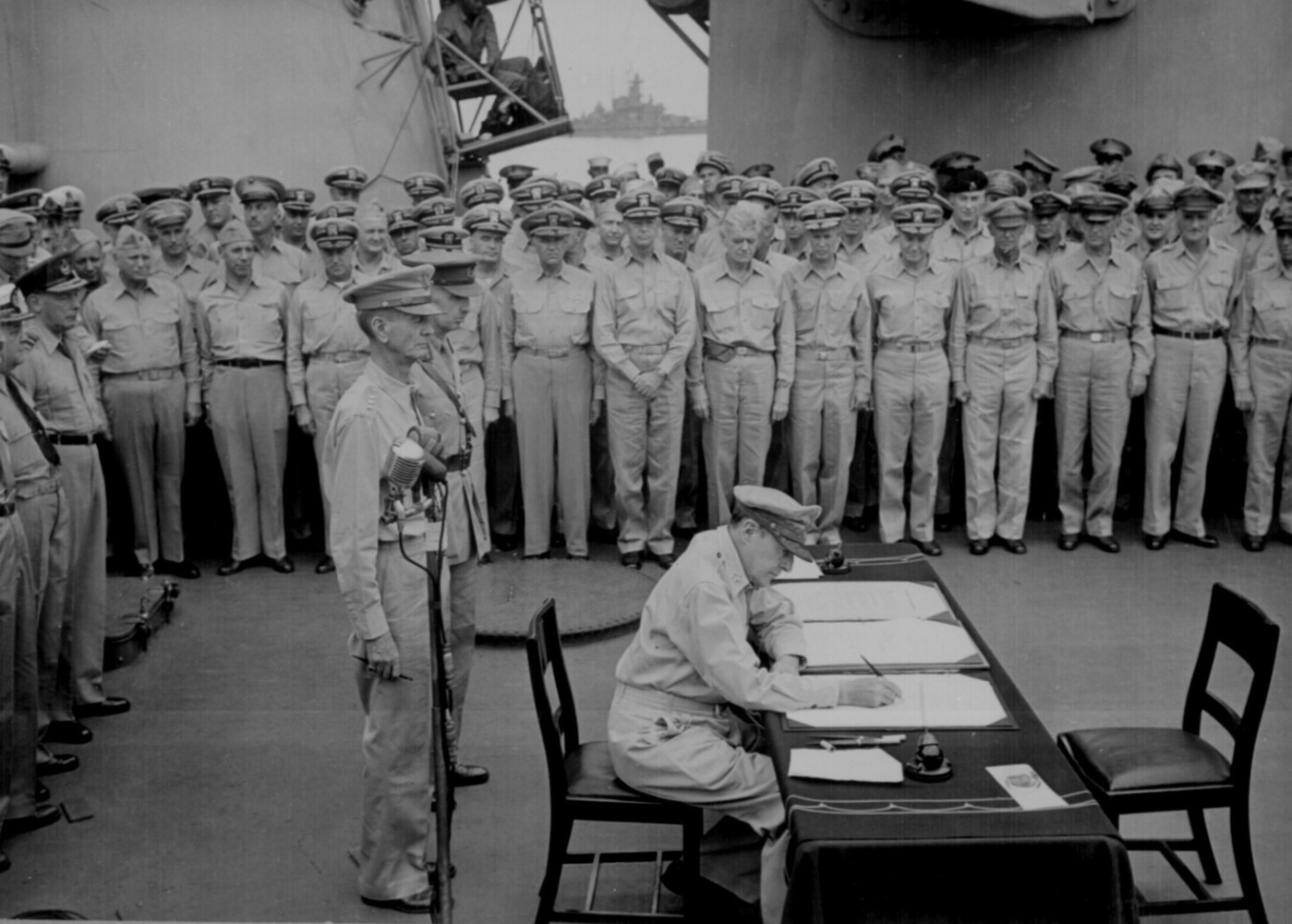 On September 2, 1945, 19-year-old James Charles Wiegman was one of the few American sailors who had a bird’s eye view of the most important military events in world history.

Wiegman of Fort Wayne, Indiana, was at sea aboard the battleship, USS New Mexico, when the Japanese Instrument of Surrender ceremony was conducted.

He was born in Fort Wayne in 1926. After graduating in 1944 from South Side High School, Wiegman was drafted into the Navy.

The following year he watched an historic ceremony that would impress him for the rest of his life. It took place aboard the U.S.S. Missouri in Tokyo Harbor.

Almost six years to the day that Germany had invaded Poland on September 1, 1939, the Japanese military surrendered to Allied forces.

I interviewed Jim Wiegman in 2014. He recalled many details about the ceremony. He had one regret, which I’ll include at the end of this story.

This is an excerpt of a story that appeared in America in World War II magazine (October/November 2016).

The story is in my book, They Did It for Honor: Stories of American WWII Veterans.

Wiegman stood on the fo’c’sle {short for forecastle, the front part of the ship’s upper deck} of the New Mexico. From this vantage point he could look down at the deck of the U.S.S. Missouri, anchored barely 100 feet away.

As the New Mexico was Admiral Halsey’s flagship, it had been chosen to anchor alongside the Missouri. When the New Mexico pulled into Tokyo Harbor, the crew was ordered to be at General Quarters. “From my station in the engine room I heard motors of the ship’s 14-inch guns being raised and lowered as seamen on the top deck rotated them in turrets,” said Wiegman. “The war might have been over, but we didn’t trust the Japanese.”

After the anchor dropped and all seemed secure, the crew of the New Mexico was released from their positions to move topside to watch the surrender proceedings. Armed marine guards stood on the fo’c’sle. “If a battleship had an admiral, a marine guard was always present,” he said.

Wiegman saw American seamen transport Japanese representatives via motor whaleboats from shore to the Missouri. “One Japanese officer appeared short and rotund,” he said. “All carried a stiff, military bearing.” The Japanese emperor was not among them.

They went up the steps assisted by American Navy personnel. The formal treaty was laid on the table. “We aboard the New Mexico could not hear anything that was said, but we could see General MacArthur preside,” said Wiegman.

“I felt sorry for the crew of the Missouri. They were restricted from being on their quarterdeck and could not have a good view of the important event taking place on their own ship.”

The ceremony to end the six-year war took just 23 minutes.

Afterward, the New Mexico remained anchored at Tokyo Bay for two days. When no retaliation seemed imminent, the crew pulled anchor and headed to Pearl Harbor where they re-loaded with supplies and headed toward the U.S. through the Panama Canal.

Back in the US, Wiegman worked at Chelsea Naval Hospital in Boston until earning enough points to be discharged in August 1946. He graduated from Purdue University and fulfilled his dream by working as an engineer at General Electric in Fort Wayne. He and his wife Adda Jane became parents to three sons.

“The signing of a peace treaty to end a war is something written about in history books and few people get to see,” said Wiegman. “I felt in awe of the opportunity to witness such an unusual event. I just regret not having a camera to record the event.”