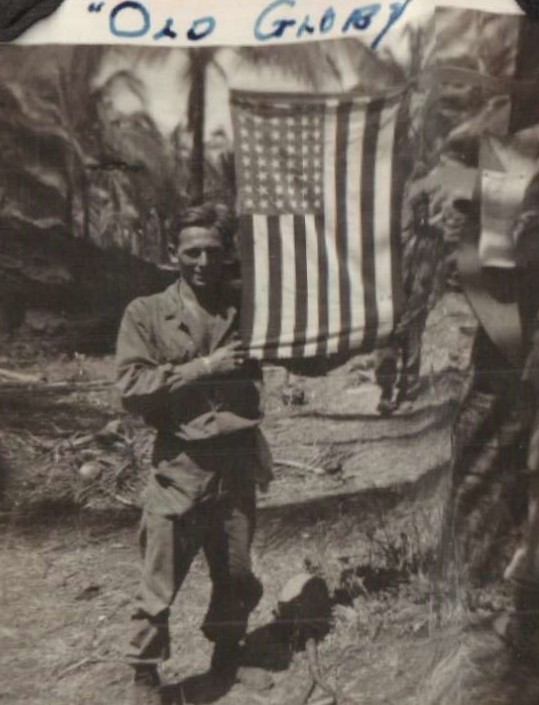 I love the American flag.

I’m a proud American who loves her country’s flag and what it stands for so much that I’m dedicating my 30-year writing career to interviewing American veterans and writing books about what they have done to protect our country and people around the world.

Our flag stands for so much that is valued the world over – freedom, sacrifice, hard work, discipline, loyalty to one’s country and fellow citizens.

When I have sent book cover ideas to my designer (Rob Williams at http://www.Ilovemycover.com), I have always had him add the American flag on the cover. Here are a few of my 10 covers for you to see.

I think he has done a great job.

One of my favorite veteran photos is that of Paul Rider holding the American flag in a Philippine jungle.

He served with the 1st Cavalry Division, A Battery, 82nd Field Artillery.

Rider was part of a flying column of 700 soldiers (a small, military land unit capable of moving quickly) that battled first in Leyte, then Luzon. “We landed on the north shore and kept moving while under attack,” he said.

At some point Rider’s unit had secured an area and Rider was photographed victoriously holding his country’s flag above his head with a big smile.

This photo gives me chills when I think about how much danger he was in while serving in the South Pacific.

Read about Paul Rider in my book We Gave Our Best: American WWII Veterans Tell Their Stories.

Here is a short-short video of Paul Rider telling about his military service following my interview with him.

While you are there, subscribe to my Youtube Channel for more World War II veteran videos. These are great for patriotic meeting openers, classes (homeschool), even Sunday School classes.

We would not be free without you.

What does the American flag and Flag Day mean to you?

Do you have a favorite photo of the American flag? Share one in the comments.

4 thoughts on “Flag Day and WWII”