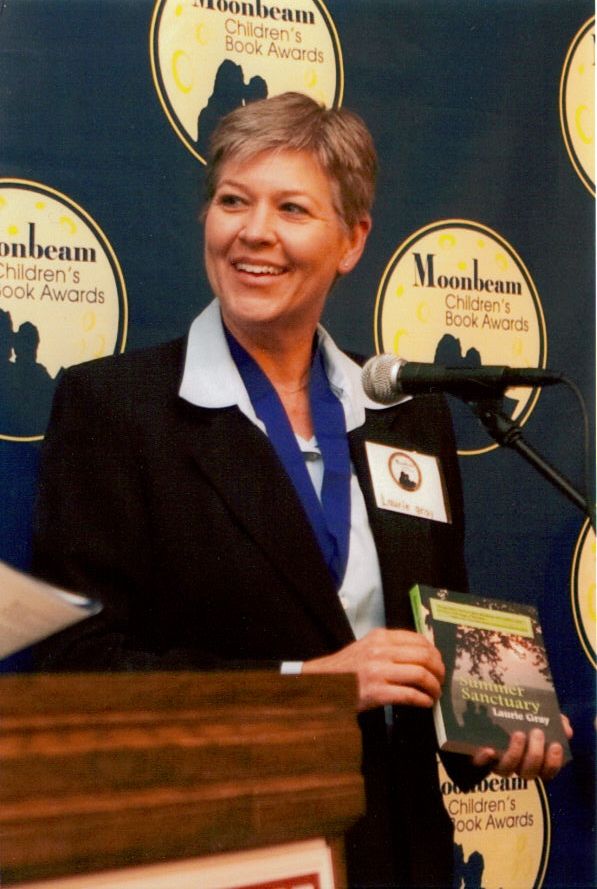 I have the privilege of knowing Laurie Gray, award-winning author of Summer Sanctuary. This book has earned many favorable reviews. Look for this book in your library. If it is not available from your library, ask your librarian to order this book. You’ll enjoy it.

Sometimes the idea for a book is right in your own backyard – or, in Ft Wayne resident Laurie Gray’s case, in her local library.

Summer Sanctuary, the Young Adult novel released by Luminis Publishing in 2010, is Gray’s first novel. The idea for the book occurred after her daughter, Victoria, was born in 2002. “During visits to the library for story time, I noticed two groups of people,” she said. “There were homeschooled students who sought vicarious experiences through books and people who used the library as a place of shelter and safety.”

A former deputy prosecutor for Allen County, Gray focused the story on a 12-year-old boy who meets a homeless girl his own age in the library. “The male and female protagonists are unlikely friends,” said Gray. “The boy is a homeschooled preacher’s son who lives in a secure two-parent family. His greatest worry is how to handle his best friend’s move away. At the library he befriends a girl who comes from a vastly different background, which includes poverty and homelessness. Throughout the book, the two learn how to deal with each other’s differences.”

Gray’s goal in writing the book was to convey to young readers the importance of learning to accept people different from one’s self.  “I want readers to find hope and encouragement and something important about friendship and independence within the pages of Summer Sanctuary,” she said.

Gray began writing Summer Sanctuary in 2005. She finished it in 2006 and began seeking a publisher. When a friend from a local writing critique group told her about a new publisher, Luminis Books www.luminisbooks.com, based out of Indianapolis, Gray submitted her work. The book was accepted by Luminis in 2009.

Working with words and teens have been important components of Gray’s life. After graduating from Goshen College, she worked as a high school language teacher. Later, she graduated from Indiana University School of Law and was assigned to the Drug Court Intervention Program and Juvenile Sex Crimes. She has served as an author and lecturer for various Indiana Continuing Legal Education programs, as co-chair of the Women Lawyers Section of the Allen County Bar Association and as court-appointed Spanish/English interpreter in both state and federal courts.

Gray presented at the 25th National Symposium on Child Abuse in Huntsville, Alabama in 2009 and 2010.  “I’ve worked with a lot of troubled teens,” said Gray. “I wanted to write something to help them feel more connected and less alone in this world as they struggle to find their own way.”

She says the most challenging part of writing the book was making the characters real. “I wanted them to be more than stereotypes, extensions of myself or reflections of people I’ve known,” she says. “Writing dialogue is challenging because I want it to sound like something a person would say, but I also want to make sure it’s concise and keeps the pace and plot moving.”

When the editor at Luminis asked Gray for cover art ideas, Gray consulted Vicki Junk-Wright, art teacher at Canterbury High School. they decided to ask the school’s students to design a suitable cover for Summer Sanctuary. After considering several submissions, Luminis chose a design by Canterbury High School freshman Kenneth Harkenrider. His design, taken from a photograph of two children sitting under a tree, depicts a scene in Summer Sanctuary. The photo is of Kenneth and his sister, Camille, taken by their mother, Lorie Harkenrider. When Kenneth’s work was accepted, he was paid for his work by Luminis.

Gray has written a second book in the genre of historical fiction. While shopping it with publishers, she has begun writing a third novel for young adult readers.

For more information about Gray and Summer Sanctuary go to www.socraticparenting.com

Reprinted with permission of News-Sentinel www.news-sentinel.com