This interview with Dick Girocco – Navy veteran / Pearl Harbor survivor came by Skype in 2015. Thanks to the staff of Pacific Aviation Museum in Honolulu for arranging the interview. We must never forget what this momentous day meant in our nation’s history. Remember to thank a vet for his/her service!

Caption: Dick Girocco thought he was in paradise, serving in the Navy in Pearl Harbor prior to Dec. 7, 1941.

A cacophony of strange noises outside their hangar on Ford Island caused Seaman 2nd class Richard ‘Dick’ Girocco and other seamen in his PBY squadron (‘patrol bomber’) to run outside to discover the origin.

The sight of planes in the sky didn’t immediately alarm them. The seamen working near Pearl Harbor in the early morning hours of Sunday, December 7, 1941, were preparing to move equipment to Perth, Australia. They believed other military were working as well. “We thought the Army Air Corps was dropping flour sacks for practice,” said Girocco.

As Girocco and the others gazed upward, they noticed red circles on the planes. The young American seamen quickly realized the planes were not being flown by Allied troops dropping inert flour bags. Japanese Imperial forces had painted their planes to resemble those used by the Army Air Corps. Their pilots were dropping bombs.

Pearl Harbor was under attack! 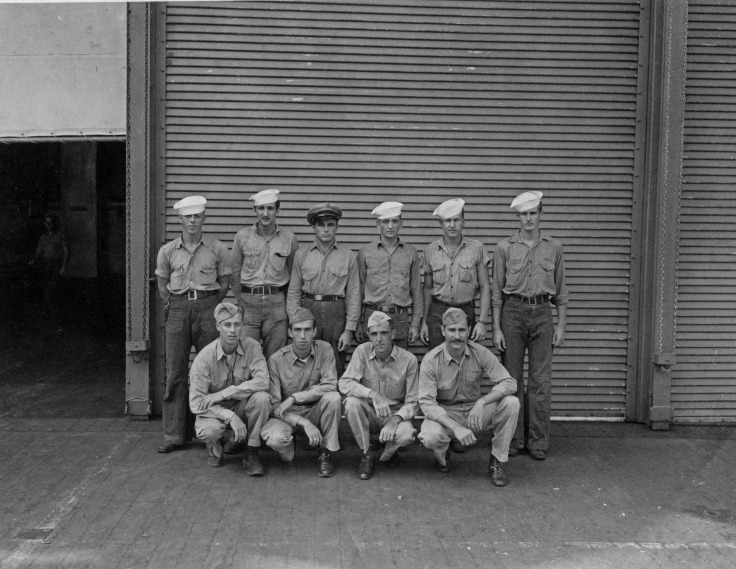 Dick Girocco thought he was in paradise upon landing at Pearl Harbor in Thanksgiving 1941. “There were tall buildings, a harbor and lots of green water and sand,” he said.

The sight was a mecca for Girocco, born in 1921 in Milwaukee, WI. A few years earlier, he worked for the Civilian Conservation Corps at a Forestry Camp in WI for six months earning $30/month. “I sent $22 home for my family and kept the rest,” he said.

He first tried to enlist in the US Navy at a recruiting station, but a broken tooth in the front of his mouth deterred the Navy recruiter.

Girocco was transferred to a duty station on the USS Saratoga patrolling the Hawaiian Islands. Sixty sailors, including Girocco, shipped from San Francisco to Hawaii, arriving in late November in 1941.

Girocco and others were in the process of laying a pipe line from the water past the hangars when they spied the enemy attack.

Prior to December 7, seamen on Pearl Harbor had discussed the possibility of an attack by foreign forces. “We thought the Japanese would attack the Aleutian Islands off the coast of the Alaskan territory or maybe the Philippines to get rid of our naval fleet,” said Girocco.

His first impulse at realizing his life was in danger was to run back inside the hangar for protection. When he looked around, he saw a closer means of rescue.

Several feet of pipe lay close by. Scrambling inside, Girocco had a ring side seat to the horror and destruction that filled the next several minutes as Japanese air forces tried to annihilate the American military presence in Hawaiian territory.

Girocco later learned that minutes before attacking Pearl Harbor, Japanese Imperial Navy aircraft had bombed the nearby U.S. Naval Air Station on the east coast of Oahu. As a result, 27 Catalina PBY Seaplanes – also known as ‘flying boats’ — were destroyed, and six others damaged.

This was a crippling effect as the long-range patrol bombers could have followed the Japanese planes back to their carriers as a defensive maneuver.

During a respite in the Japanese firing, Girocco thought it safe to venture out to the seaplanes to inspect them. However, the concussion of a bomb exploding – later he learned it had hit the USS Destroyer Shaw in the Navy yard dry dock — sent him flying into a nearby ditch.

“I couldn’t see anything but I could hear the noise and the concussion in the ground,” he said. “What I remember most is when Japanese bombers set off ammunition in Hangar 6. We were again in shock. It seemed all we could do was wait for instructions.”

Finally, thankfully, quiet descended over the area. Navy personnel quickly set to work, trying to establish order. A hangar was made into quarters and a barracks along Battle Ship Row was converted as a hospital for shrapnel wounds and other injuries.

For days the uninjured like Girocco looked for survivors. “We did rescue flights along the coast and evacuated marines who were injured,” he said. “We flew close to the water about 500-1,000 feet. A PBY could land on water and retrieve survivors.”

Girocco had liked to swim around Pearl Harbor before the attack. That activity ended as afterward it was filled with oil and the mortally wounded. “We used rubber rafts to get dead bodies in the water,” he said.

Recovering from Pearl Harbor seemed insurmountable, but hearing, just a day later, American President FDR had declared war on Japan and Germany and plans were being made to go on the offensive gave the seamen impetus to fight.

Girocco survived the remainder of the war which ended with a Japanese surrender in September 1945. He remained in his PBY squadron until October 1943 when he contracted malaria and was transferred to a different assignment. He continued serving with the Navy over the next several years in a number of places, including Okinawa and Texas.

When Girocco retired from the Navy in 1960, he visited Hawaii repeatedly. In 1987 he moved to the state he had thought of as paradise and began volunteering at the Pacific Aviation Museum Pearl Harbor. “Pearl Harbor was the most difficult part of my military experience,” he said. “I’m encouraged by the number of young visitors who show interest in our nation’s military history. I’m proud of our country and what we did to save it.”