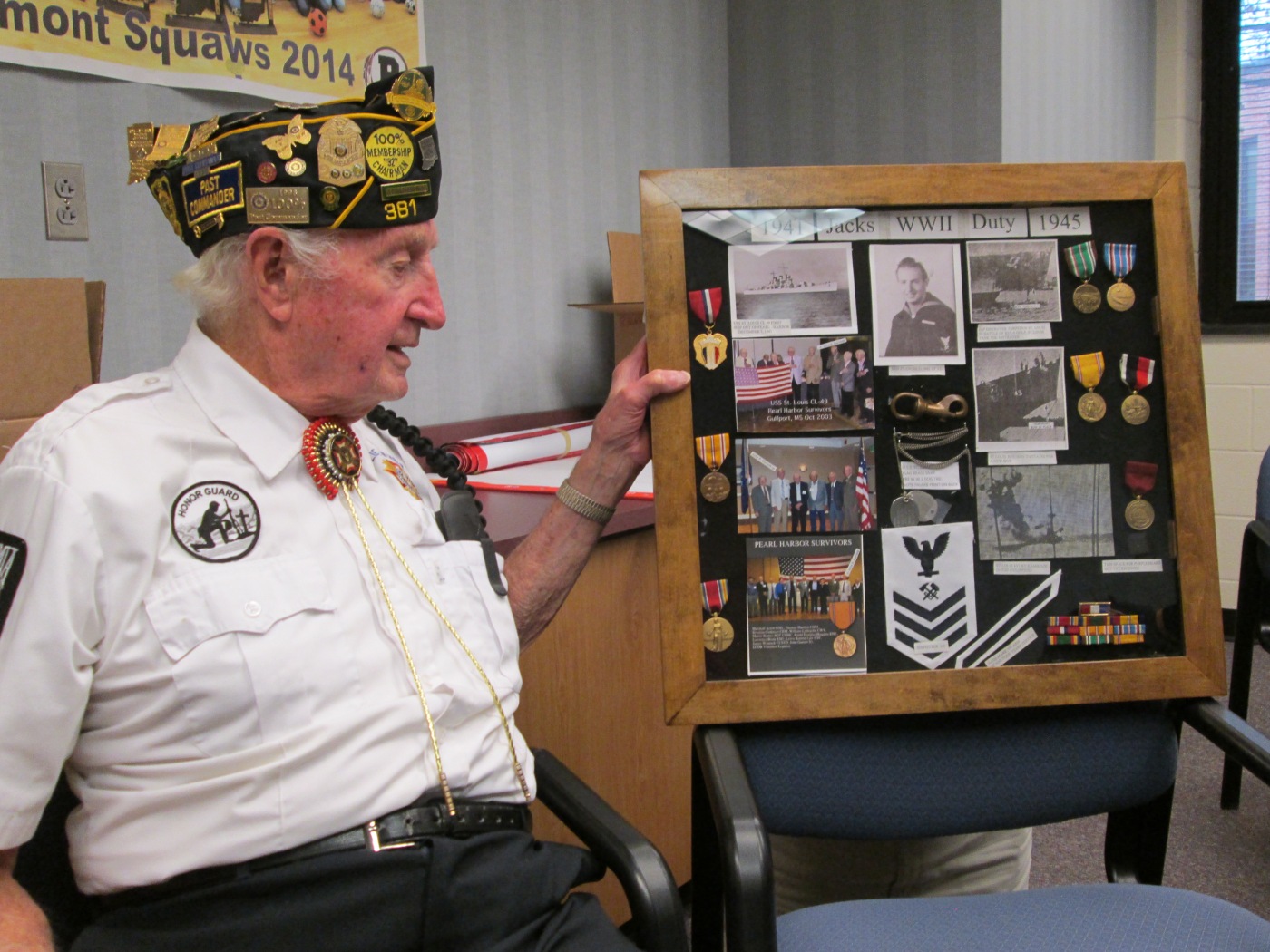 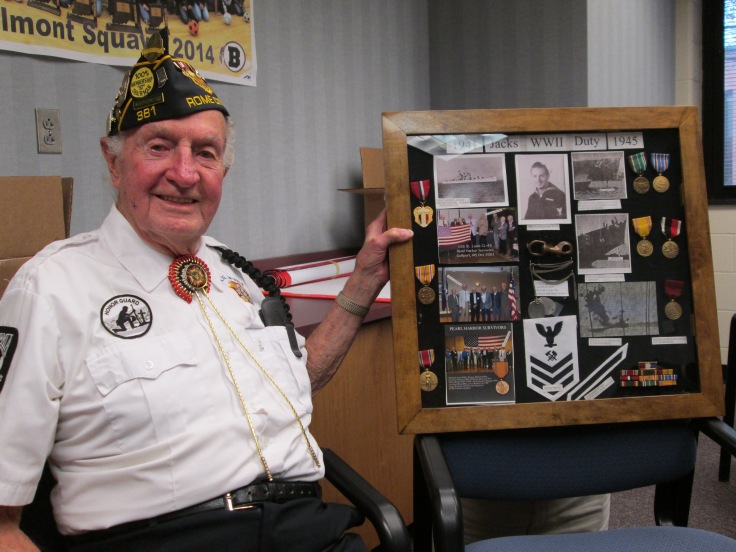 Today I’m posting a story from a sailor who was on the USS St Louis stationed at Pearl Harbor in December 1941.

You can hear a brief account of his experience here. Thanks to Bryan Lineberry, teacher at Bellmont High School in Decatur, IN, for inviting me to meet Mr. Garrett.

I’ll post a second account from another sailor I’ve interviewed tomorrow on December 7, to commemorate this significant day in our nation’s history.

These are 2 of the nearly 150 interviews I’ve conducted with WWII vets.

Other World War II stories can be found in my book, World War II Legacies: Stories of Northeast Indiana Veterans. It can be purchased through this site or at Amazon. Thanks for your interest in the stories of these great men and women who served our country so well!

At 7:56 a.m. on Sunday, December 7, 1941, Jack Garrett of Rome City, Indiana, was stationed aboard the St. Louis, a light cruiser moored at the pier in the southeast lock of Pearl Harbor.

Suddenly, a message come over the base’s PA system. More than 70 years later, Garrett can recall the bone-chilling words he heard that morning. “The guy said we were being attacked and it was not a drill!” he said.

Garrett was standing on the second deck of the St. Louis. Within minutes, the crew had scrambled to their assigned battle stations (general quarters).

Later Garrett and the rest of the crew learned that other seamen aboard the St. Louis had sighted Japanese planes approaching the base minutes before the alarm sounded.

At first the St. Louis with its 100,000-horsepower engines had no power. By the time the second wave of Japanese planes came in for attack, the ship had begun moving into the channel entrance for a strategic battle position.

“As the St. Louis began to back away, other battleships pulled out to allow us to get into place,” said Garrett. “At first it took a while as we were slow and heavy, but we were the first ship to leave the harbor.”

Earlier that year, the St. Louis, moored at Berth B-21 in the Navy Yard, had sailed west with other cruisers of the Battle Force, patrolling the waters of Wake Island, Midway, Guam and Manila.

It returned to Hawaii that fall and was at the Pearl Harbor Navy Yard for upkeep.

As the St. Louis moved away from the harbor, its operable anti-aircraft guns were manned and fired on the Japanese attackers. A two-man Japanese sub fired two torpedoes on the ship, but they hit the reef and did no damage to the ship.

Incensed, the crew aboard the St. Louis searched two days for the Japanese seamen inside the subs. “We never found them,” said Garrett.

As members of the ship’s crew fired 5-inch guns at Japanese enemies, the crew realized the St. Louis, while sustaining minor bullet hits, was not a principal target for attack.

Within minutes, the Japanese aircraft had sunk or heavily damaged six of the eight ships. “I could see survivors who had been aboard the damaged ships swimming to shore,” said Garrett.

The St. Louis continued out to sea where she joined the USS Detroit and Phoenix, both of which joined Garrett’s crew in searching the waters around Pearl Harbor. “We wanted to find the Japanese naval fleet,” said Garrett. After searching three days, the St. Louis’ crew was unable to locate any part of the Japanese strike force.

The ships and their frustrated crews returned to Pearl Harbor on December 10. In the days following the St. Louis escorted transports carrying casualties to San Francisco.

Garrett had never dreamed of such dramatic action when he dropped out of high school in 1939 at age 17 in northern Indiana to enlist in the US Navy. “I joined because my cousin was in the Navy and he thought I’d like it,” he said.

By 1941 he was serving aboard the USS St. Louis stationed at an island in the Pacific he had never heard of prior to joining the Navy — Pearl Harbor.

“It was a two-ocean war,” Garrett said. “At the beginning of the war our naval fleet was too small to accommodate the demands. Those in charge decided to fight Europe first. We tried to make the Japanese think we were all over the Pacific when in reality we had few ships there.”

The St. Louis was involved in other battles during the war, including the Battle of Dutch Harbor in June 1942. Fought on Amaknak Island in Unalaska, Alaska, it was one of the few sites on American territory, besides the attack on Pearl Harbor, to be bombed by the Japanese during World War II.

In mid-1942 the crew sailed to the Solomon Islands and fought a ferocious battle on the island of Guadalcanal that waged until 1943. “The Japanese brought ships in through the night,” said Garrett. “We had seven ships as part of a convoy. The USS Helena was our sister ship.”

USS Helena (CL-50), a light cruiser, was damaged in the attack on Pearl Harbor. She continued to fight in several battles in the Pacific War before being sunk by three surface-fired torpedoes at the Battle of Kula Gulf in 1943. Garrett recalled the sinking.

“When we contacted the crew of the Helena, we got no answer,” he said. “We shone the spotlight in her direction and saw the bow had been struck. We saw the ‘50’ and knew it was Helena. We found out later torpedoes had gotten it.”

In fall 1942 the St. Louis sailed to the Aleutian Islands of Alaska which was still a territory. The enemy had overtaken the island of Attu in June 1942 but American Navy won it back after a two-week battle in May 1943.

In July 1944, Garrett was on the St. Louis as it patrolled near Surigao Strait and was attacked by kamikazes. The Japanese planes bombed and rammed into the ship, causing it to list to port. By the time the cruiser was back on an even keel with all major fires out, dozens of crewmen were wounded, killed, or missing.

The crew managed to sail to Mare Island Navy Yard in San Francisco for repairs. They thought they would have a couple of weeks to wait for the ship’s new bow to be built. Half of the crew got a 10-day leave and the other half was scheduled to go after the first group returned.

Garrett was selected with the first half. “I took a train to Chicago, then Fort Wayne for a visit home,” he said. “It took 2.5 days to go each way so I had five days at home.”

By the time he returned, the bow was in place and the ship was ready to go. The other half of the ship’s personnel was forced to forgo their leave.

By the time the war ended, the St. Louis had participated in 11 sea battles. “Our nickname was ‘Lucky Lou’,” he said. Even Tokyo Rose, the infamous Japanese propagandist who gave radio talks designed to deaden the morale of Allied troops, talked about the St. Louis. “She said the St. Louis had been sunk three times,” said Garrett, who only returned to the US once during his four years of military service.

Another interesting experience happened to Garrett prior to his leaving the ship. A PT (Patrol Torpedo) boat approached the side of the St. Louis. “It was protocol for the boat’s officer to approach the quarter deck to ask permission to come aboard,” said Garrett. “He asked to see Lieutenant White and an orderly took him to Lieutenant White’s state room.”

After the visit concluded, the PT officer asked Garrett and others aboard the St. Louis if they’d like to ride in the PT boat. “I had always wanted to ride in one so I got permission,” said Garrett. “We rode for 30 minutes and went about 60 miles per hour. It was fun.”

Garrett never forgot the PT boat or its number – 109. The number would later become famous as would its commander – future US President John F. Kennedy. As a Lieutenant in the US Navy in August 1943, Kennedy commandeered his boat’s crew through a hazardous rescue after their boat was attacked by a Japanese destroyer.

After the war, Garrett worked for the Pennsylvania Railroad. He retired in 1984. A grandson has served in the Air Force. Garrett has participated in Honor Flight of Northeast Indiana.

In the 1980s Garrett and others tried to save the St. Louis from the scrap yard to no avail. Today, all that’s left of the ship, which traveled a quarter of a million miles around the world and fired 38,000 rounds of ammunition, is its wheel which hangs in a museum in the city of St. Louis, Missouri.