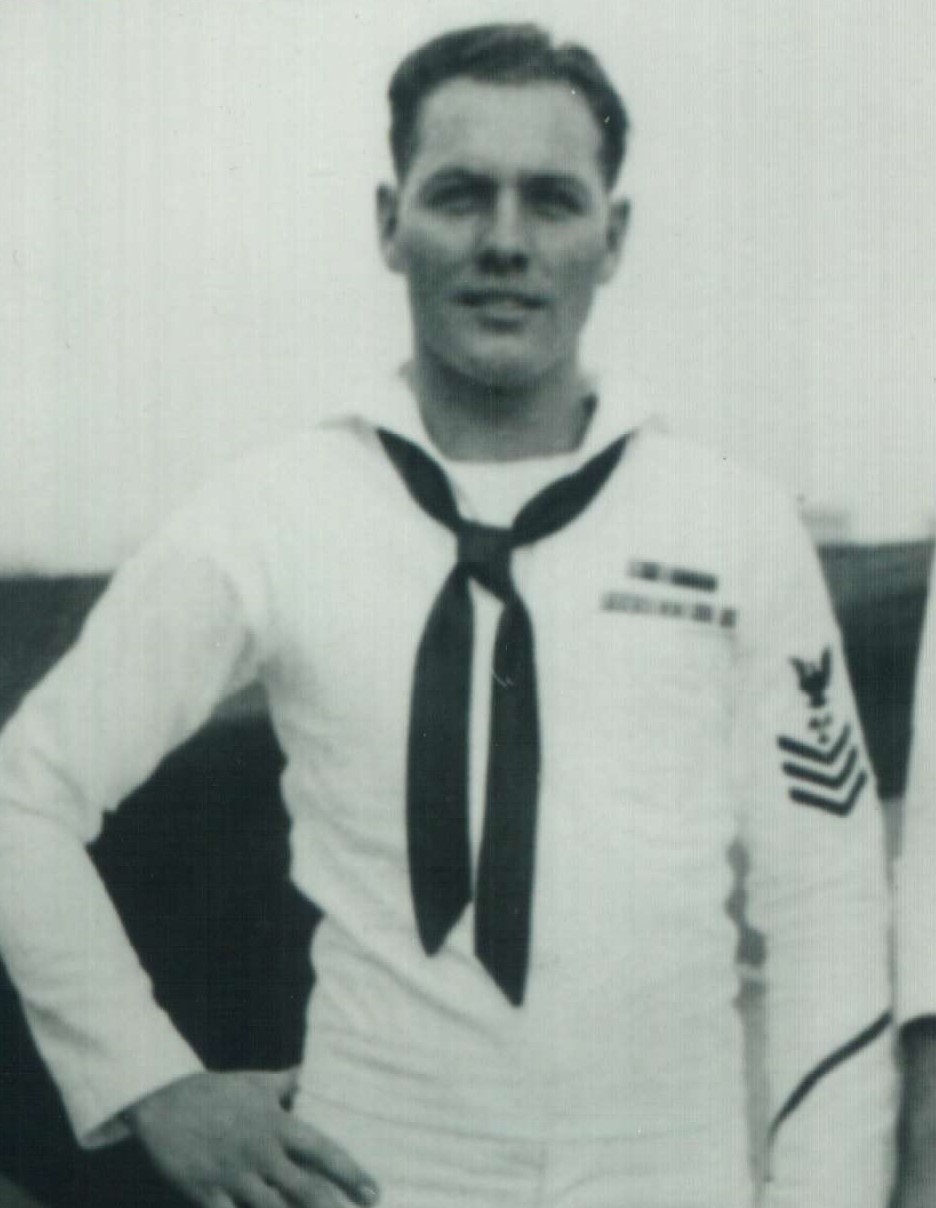 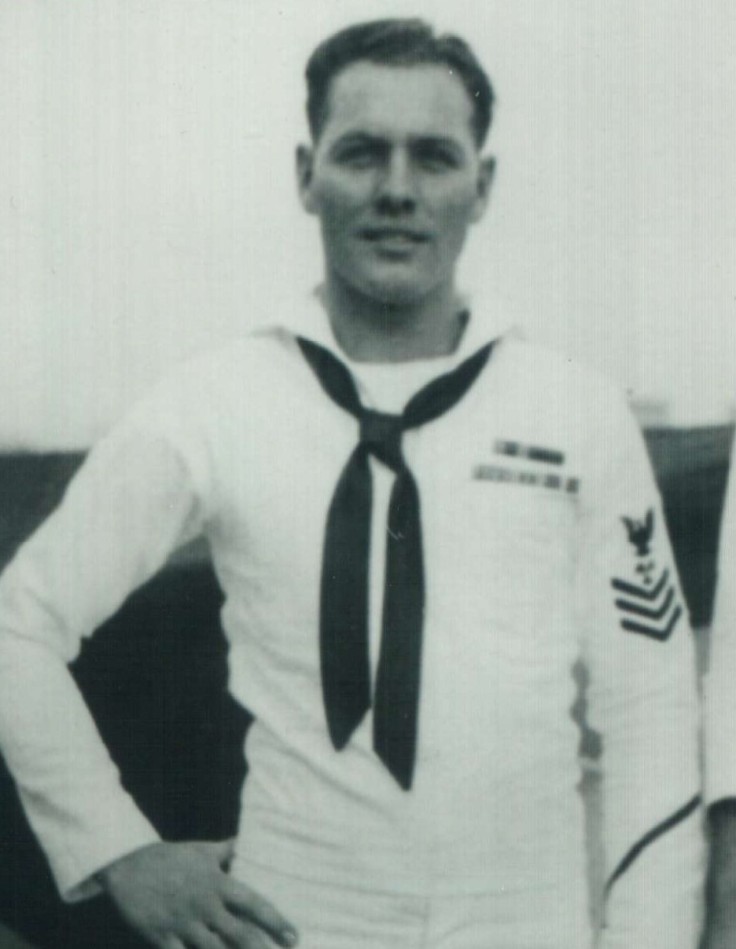 “From everyday small feats to undeniably heroic efforts, the accomplishments and achievements of America’s Navy are vast and significant. Since its birth on October 13, 1775, the Navy has been involved with more than ten major wars and countless battles in the effort to bring security, democracy and prosperity to the American people and to the international community.” from US Navy Ball website.

I didn’t know sailors could wear facial hair until my interview with Al LeFevra. When he showed me a photo of himself dancing in a hula skirt and wearing a beard, I could hardly believe my eyes! Here is Al’s story as published in the News-Sentinel on Oct 12, 2015. All of these photo materials are printed with permission from the newspaper and the veteran.

They were provided by Al LeFevra from his collection of war mementos.

Believing his son Al would soon be drafted during WWII, Rene LeFevra, a WWI veteran, shared information about his own time in the Army with his son. “He told me how he lived in fox holes, had little to eat and bathed rarely,” said Al. “He thought it would be an advantage for me to be in the Navy because I’d have good food and a clean place to sleep. That was all he needed to say!”

Al LeFevra was born in Woodburn in 1922. After graduating from Central High School in Fort Wayne in May 1942, he enlisted in the Navy in Indianapolis in November.

After completing basic training at Great Lakes Naval Training Center in Chicago, he was sent to Treasure Island Naval Base in CA. LeFevra signed up for sea duty and was assigned to the USS Gemsbok (means ‘African antelope’).

The Gemsbok, which held a crew of approximately 100, was a supply ship converted to a tanker. “The conversion was to fool the Japanese,” he said. “During combat, they dropped bombs on tankers to destroy fuel. Many of our tankers carrying oil were getting sunk. Regular fuel ships measured approximately 900 feet in length and held about 100,000 barrels of fuel. Supply ships were half that length and carried half the fuel.”

On January 12, 1944, LeFevra’s ship received orders to head for Hawaii and then the Marshall Islands in the South Pacific. There they would join the US fighting fleet under the Vice Admiral William Halsey.

Although a destroyer escort surrounded the Gemsbok for protection, LeFevra was not afraid of the enemy. He had more to deal with. “The water between the US and Hawaii was rough so many of us were seasick,” he said. Crackers helped LeFevra’s stomach. 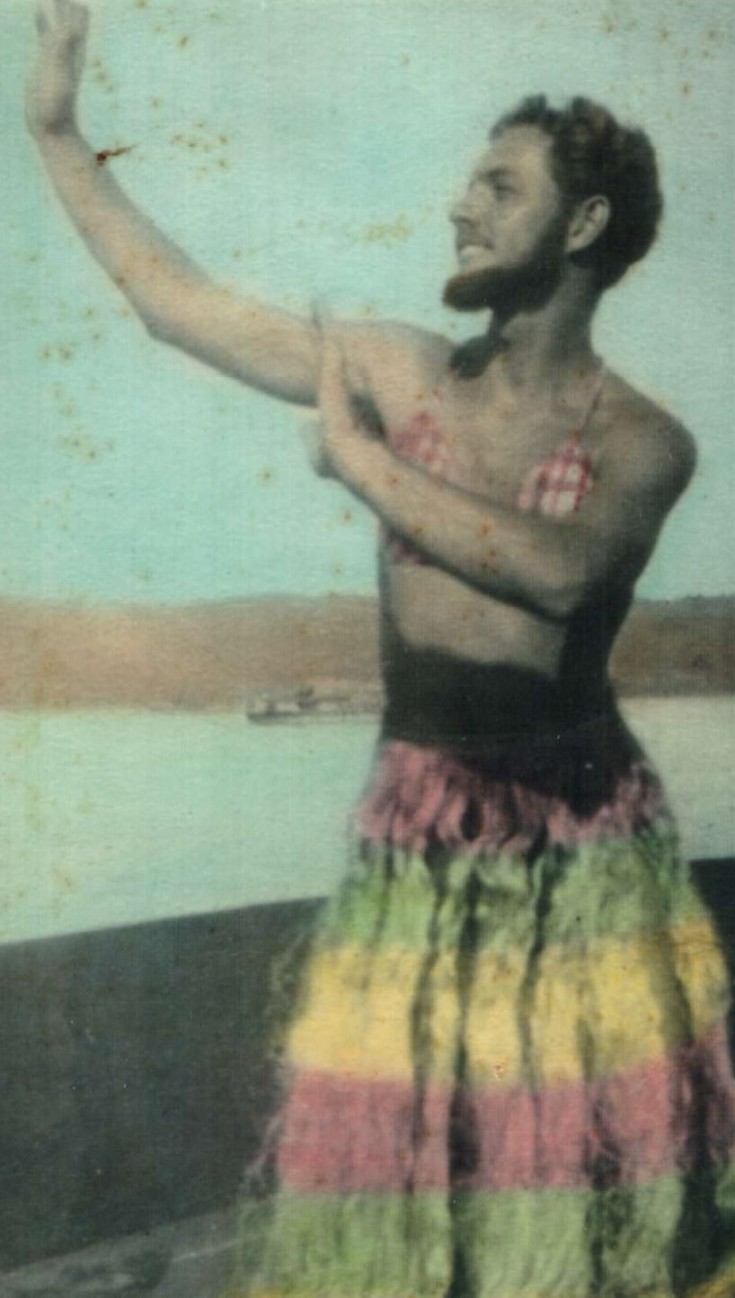 At Pearl Harbor LeFevra saw sunken ships from Japan’s December 7, 1941, invasion. He also grew a beard, which was allowed in the Navy, and paraded in a hula skirt he purchased when not on watch. Al still has this skirt today and uses it during talks at schools about the war. He said kids love it! Please excuse the photo’s quality which has deteriorated over the years.

At the Marshall Islands the crew had permission to go ashore. It was LeFevra’s first experience on a beach. “Other sailors from battleships, airplane carriers, destroyers and escorts had landed and cleared the area of Japanese soldiers,” he said.

Two months later the crew of the Gemsbok received orders to go to the island of Eniwetok. It was also deserted and served as the crew’s home base. “During our six months at Eniwetok, we furnished oil for fighting ships from Mariana, Majuro and Kwajalein islands,” said LeFevra.

A passing British ship appreciated when the crew of the Gemsbok shared fuel and food. One sailor pointed out his ship’s ‘head’ (toilet). “It overhung the water off the fantail (stern/back) of the ship,” said LeFevra. “It looked like an outhouse. I suppose that way they didn’t require a flushing system.”

The chief of the Gemsbok’s engine room was transferred and LeFevra tested for the position of water tender first class petty officer. He passed the exam and being the next highest sailor on board to a chief, LeFevra became acting chief of the fire and engine room.

He no longer had to stand watch and could eat in the chow room separate from the rest of the crew, but he had to be available in case of emergency. “I had to see all of the men under me did their job and report to the executive officer daily,” he said.

Fresh water was in short supply until LeFevra devised a solution. The Navy had a unit that processed salt water into drinkable water, though the water tasted salty. LeFevra took loose asbestos, mixed it with water and pressed it around a jug. After the solution dried, it formed an insulation. “We poured cold water from our ship into it and it stayed fairly cool with no salty aftertaste. When others found out about my water, they drank all of it. I made no more fresh water!”

In their spare time the sailors played sports. LeFevra was good at boxing, having learned it in high school. “When other sailors challenged me, we didn’t try to knock the other out, but had fun,” he said. “No one came out of it too bruised.”

In July 1944 the crew received orders to head for Saipan and Tinian. “As we anchored off Saipan, we saw fighting on Tinian four miles away as Japanese soldiers hid in caves.” The Marines bulldozed rocks and tons of dirt to fill in caves. When no one wanted a Japanese rifle that had been found, LeFevra claimed it. “I was told not to load it with our ammunition because our ammunition was too powerful for that gun,” he said.

A new officer came on board who had seen much action in fighting. When planes flew over the Gemsbok, he hit the deck. “I learned this officer had seen stress conditions,” said LeFevra. Two weeks later the officer was transferred to a hospital in Hawaii.

In January 1945 the crew received word that Admiral Chester Nimitz was the new commander of the fleet. In the following days, B29 bombers flew toward Tinian, which was now secured and provided air support for B29s. “We didn’t know until much later that the atomic bomb used to bomb Nagasaki and Hiroshima called Little Boy was unloaded there in July 1945,” said LeFevra.

Soon the Philippines were liberated and the Gemsbok sailed to Leyte Gulf and was there with many other ships in September 1945 when the war finally ended. 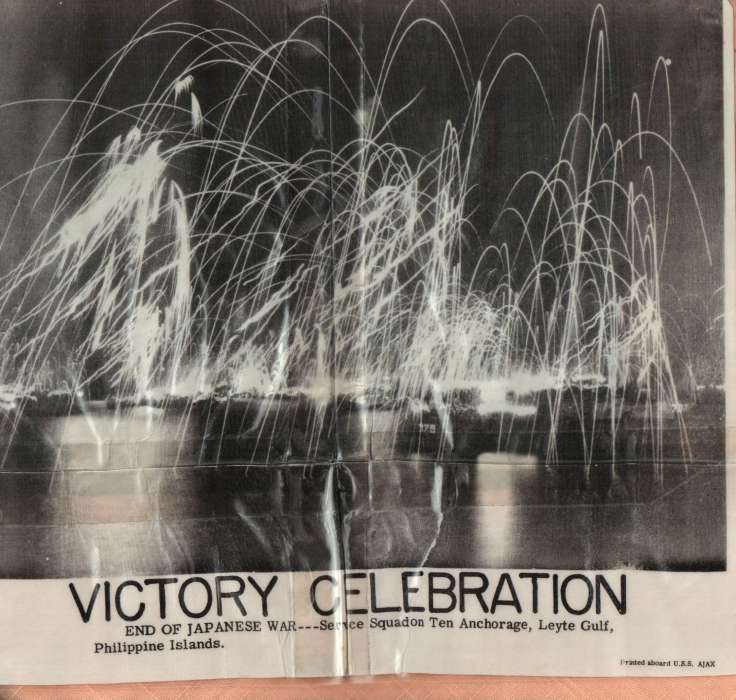 “Ships shot flares into the air like a Fourth of July celebration,” said LeFevra. When the celebration was over, the Gemsbok headed to Guam but ran into a hurricane that lasted three days and four nights. No one was allowed on deck. “Surprisingly, I didn’t get seasick, probably due to the excitement,” said LeFevra. Eating utensils had disappeared so the sailors ate sandwiches for four days.

At Kure Bay the crew went ashore to see the destruction to the city from the Allies’ recent bombing. “Everything was destroyed, so it was surprising how friendly the people were,” said LeFevra.

After the treaty of surrender was signed by the Japanese emperor and the Allies, the Gemsbok sailed for Hawaii. LeFevra had earned enough points to be discharged, but when his skipper asked him to stay aboard until the ship sailed to Alabama where it would be decommissioned, he agreed.

They sailed through the Panama Canal, then through the Gulf of Mexico to Mobile. On April 30, 1946, the sailors of the USS Gemsbok were called to order on deck under the US flag and the ship’s pennant. Each US Navy ship flies a pennant at the top of the US flag.

As they stood at attention and saluted, the US flag was lowered. The pennant was twisted, so LeFevra climbed a rope 12 feet to retrieve it.

The Captain presented it to him. “I was the only original sailor remaining from the ship’s commissioning,” said LeFevra. “He said I was one of the most honest men who had ever worked for him and gave me a letter of commendation.” LeFevra still has the pennant today.

When LeFevra was discharged, he held the rank of First Class Water Tender earning $100/month. He took home his Japanese rifle, camera, and ship’s log (diary) among other items.

After arriving in Fort Wayne, LeFevra was thrilled to see his brother Don, who had enlisted in the Navy with parental permission at age 16, to serve aboard a submarine tender, USS Prairie.

Al LeFevra worked at General Electric as a sand blaster. Adept at math, he attended Purdue University in Fort Wayne for drafting and later worked as a Senior Designer at BAE in Fort Wayne. He retired in 1987.

In 1947 LeFevra married Betty Elizabeth Willey from Marion. She and a son are deceased.

In 2013 LeFevra accompanied the Honor Flight for Northeast Indiana to Washington DC. “I feel everything went good for me while I was in the Navy,” he said.  “People from our church wrote to us and people sent cookies. We put them on the table and shared them. That meant a lot to us. We didn’t have much time to be homesick. Dad was right.”

More than two dozen stories like these are available in my book, World War II Legacies: Stories of Northeast Indiana Veterans. It features stories based on personal interviews from men/women in nearly every branch about their military service.

This would make a unique gift for a history, military lover or a person who loves America! It is written in easy-to-understand language so non-military people can understand, include students in middle/ high school. It would be a great addition to a school library.

The book can be purchased at this Amazon link.

Remember to thank a veteran today for his/ her service!