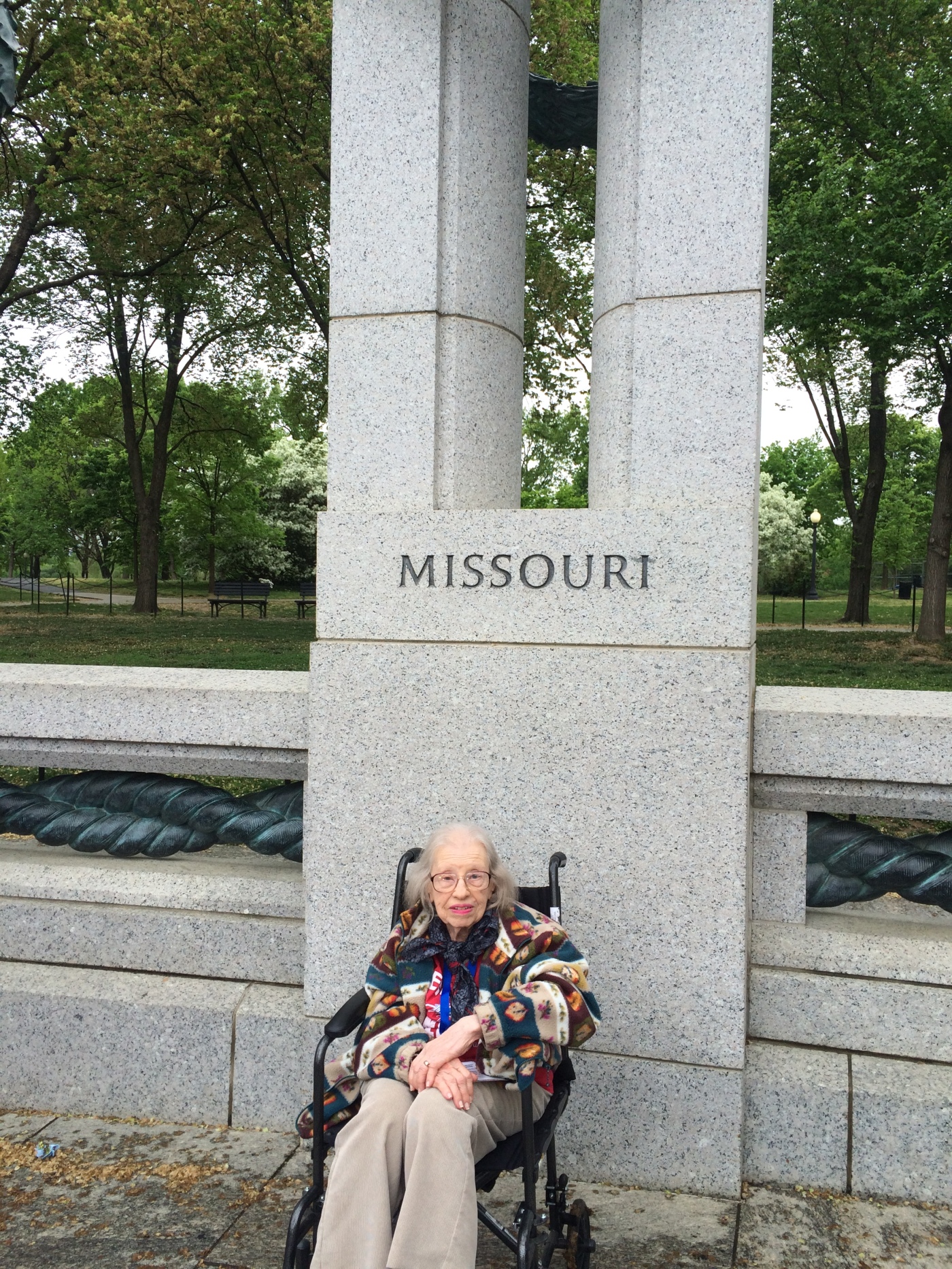 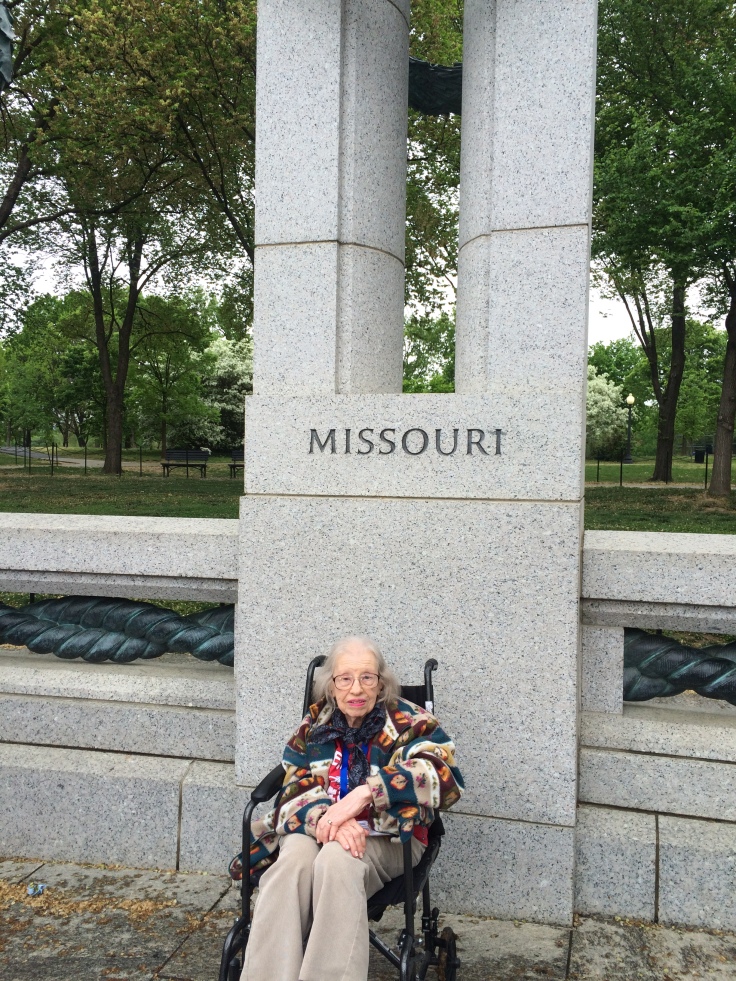 WWII Navy vet Lucille Clarke served as secretary to a JAG officer during the war.

On Wednesday, April 27, 2016, I embarked on the adventure of a lifetime. It was something I never thought would happen.

On that date I traveled with 86 World War II, Korean vets and two Vietnam veteran and each of their guardians to our nation’s capital as part of the efforts of Honor Flight of Northeast Indiana.

Honor Flight Northeast Indiana (HFNEI) is a non-profit organization formed in 2008 to send World War II veterans on a one-day trip to Washington DC to see the military memorials built and dedicated in their honor. All expenses are paid for the vets, including charter flight and meals.

Since then, the HFNEI staff — all volunteers — have enabled 1,200 vets, the majority of whom are World War II, to see the memorials honoring vets of several wars.

It was a thrill for me to participate with the Honor Flight for several reasons. First, I’m a proud American and the proud wife and mother of an Air Force retiree and an airman.

Second, I’ve interviewed 135 World War II vets and written a book about some of their stories. You can purchase the book on this site’s homepage.

Third, my father, who is now deceased, was deferred from military service during World War II due to agriculture. The government set aside a certain number of men to raise food to feed our nation and troops overseas. My Dad, Forace Hale Brewer, was one as well as my father-in-law, Christian Robert Reusser. I could not be more proud of their hard work to provide food for not only our nation but people around the world. Both are now deceased.

With all of my patriotism I wanted to pay my way as a guardian on a HFNEI. But since I had no relation to a World War II veteran, it was not likely it would happen. Most vets who go on the Honor Flights are accompanied by a relative or acquaintance.

The waiting list of people who like me want to volunteer as guardians is long. Advice given to me was to find a veteran who wanted me to go as his or her guardian. 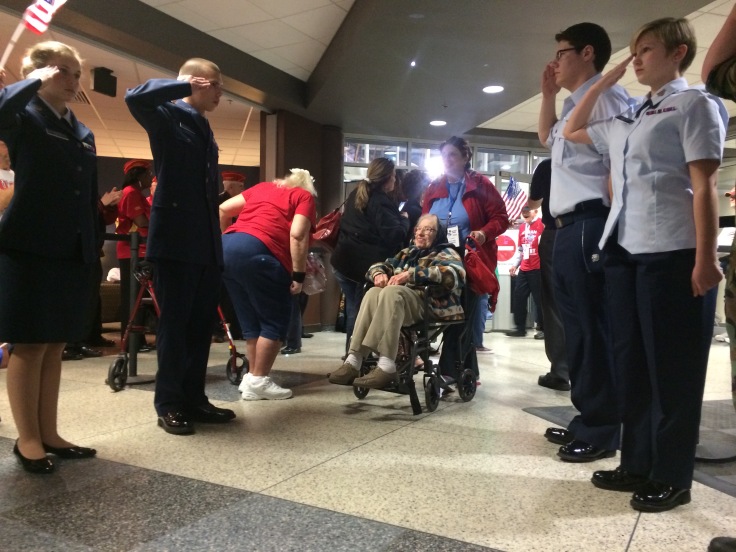 I didn’t think my chances were good, but continued to support Honor Flight of Northeast Indiana by going to the airport to welcome them home after flights around 9pm. The crowd has grown to around 3,000 people of all ages. It’s quite a party with people of all ages waving flags, shouting ‘Thank you’ and shaking hands. It’s really a stirring event.

In January 2016 as I looked over the names of the vets I had interviewed, I prayed for safety and peace, as well as for our active military and vets. I know many of them struggle for decades with things that happened during their service. 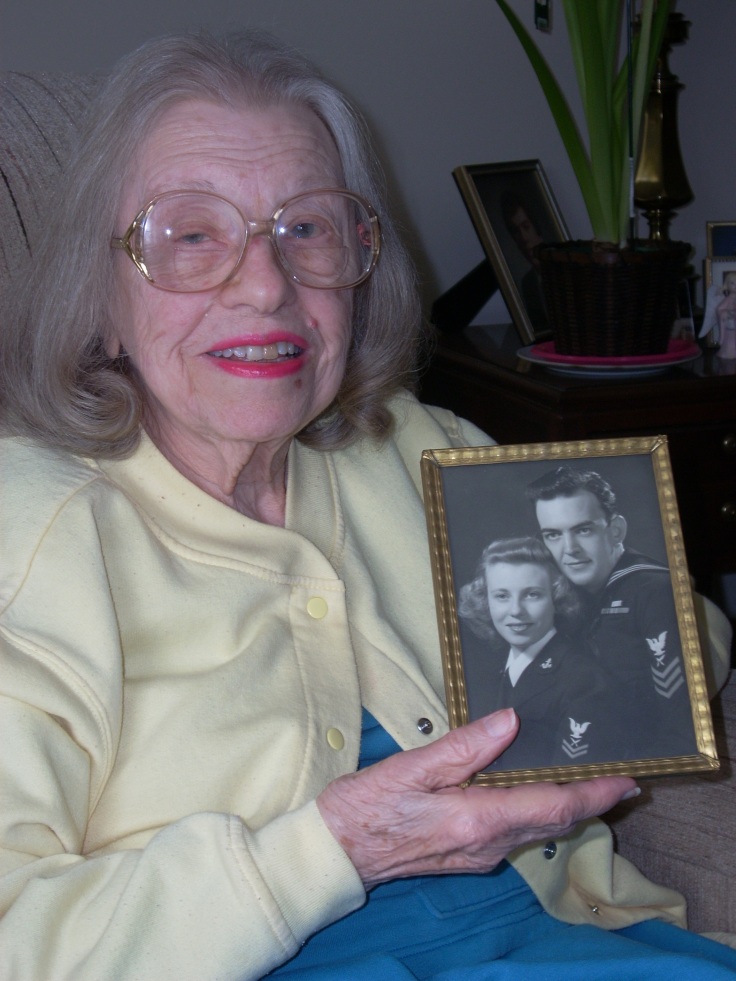 A female Navy veteran who served as a secretary to a JAG and lives in the same retirement community as my mother came to mind. Each time I visited Mom, I said hello to Lucille and chatted for a few minutes.

Lucille was a quiet lady who always smiled and was ready for a chat. I had interviewed her two years earlier and published her story, which included marriage to a Navy officer.

During my interviews with World War II vets, I always ask if he/she has participated in an Honor Flight. If so, we place their Honor Flight T-shirts in the photos for the magazine or newspaper story to promote the organization. Lucille’s photo did not show her wearing the shirt.

Her children lived in other states at quite a distance. I calmly told her I’d love to take her, then confessed inside I was jumping up and down! We filled out the paperwork and Lucille was accepted for the April 20, 2016, flight!

Dozens of dedicated volunteers come to send off the vets for their big day!

We arrived at the 122nd Fighter Wing of the Air National Guard base in Fort Wayne at 6:45am. A complimentary hot breakfast was served to all 85 vets, their guardians, the Honor Flight staff and media. The hot, delicious meal was prepared and served by American Legion Post 241 of Fort Wayne.

Vets were issued new T-shirts with the HFNEI name stamped on it. Guardians wore shirts a different color. This really helped to sort us out when we got to Washington as many other Honor Flights from around the nation were present at the memorials. Vets were also issued new World War II caps and other snacks and gifts throughout the day, all free.

Our group left Fort Wayne on an American Airlines A-321 (airbus) at approximately 8:45am. Several groups participated in the boarding of the plane, including military and honor guards. They held flags, stood at attention or clapped as the vets passed. The flight crew, dressed in patriotic colors, chatted and even sung with the group during the hour-long flight. 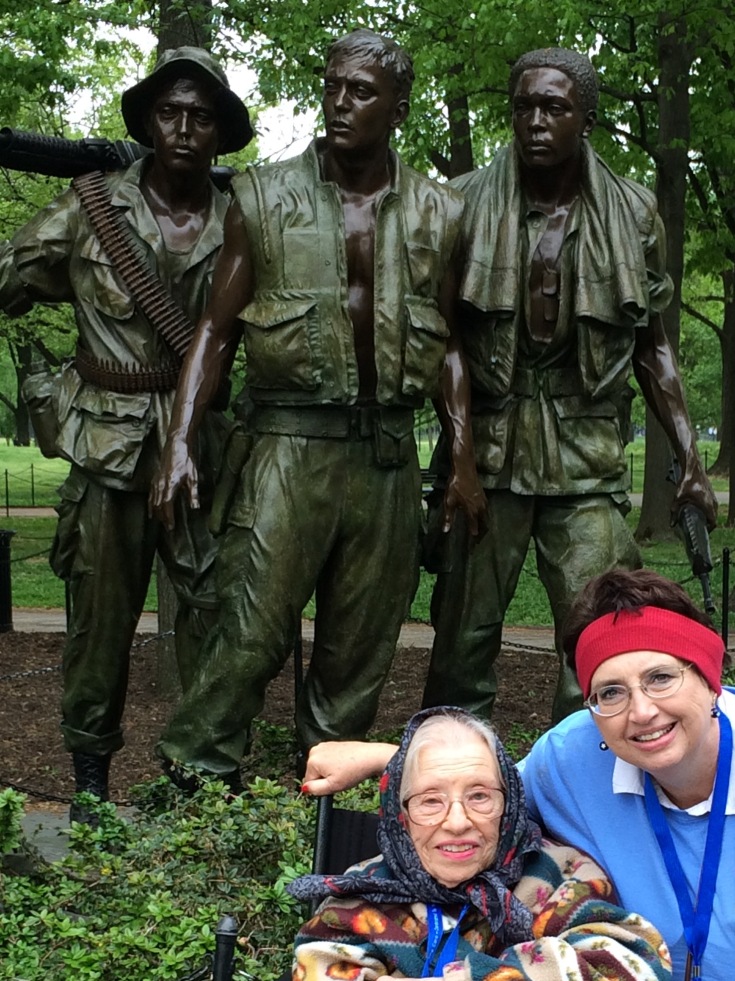 Certain procedures are followed by the Honor Flight of Northeast Indiana to ensure safety of its vets:

A physician accompanies each group. Wheelchairs belonging to the group are provided for each vet to be used as needed throughout the day. Wheelchair lifts are available on the buses – Lucille used this. Helpers are available to assist vets with settling in to seats.

Upon landing at Reagan National Airport in DC at 10am, the vets were greeted by dozens of people of all ages, waving American flags, shaking hands and thanking the vets for their military service. Outside the airport the group boarded four charter buses. Each veteran/ guardian was assigned a bus together.

The nation’s capital city, known for congested traffic, was no problem as the Honor Flight convoy sped through with police escorts! The trip was even more meaningful as my daughter, Lindsay, lives in DC and took off a day of work to join us! Thanks to the HFNEI for allowing her to ride with us on the bus to each stop! Here she is talking with Lucille. 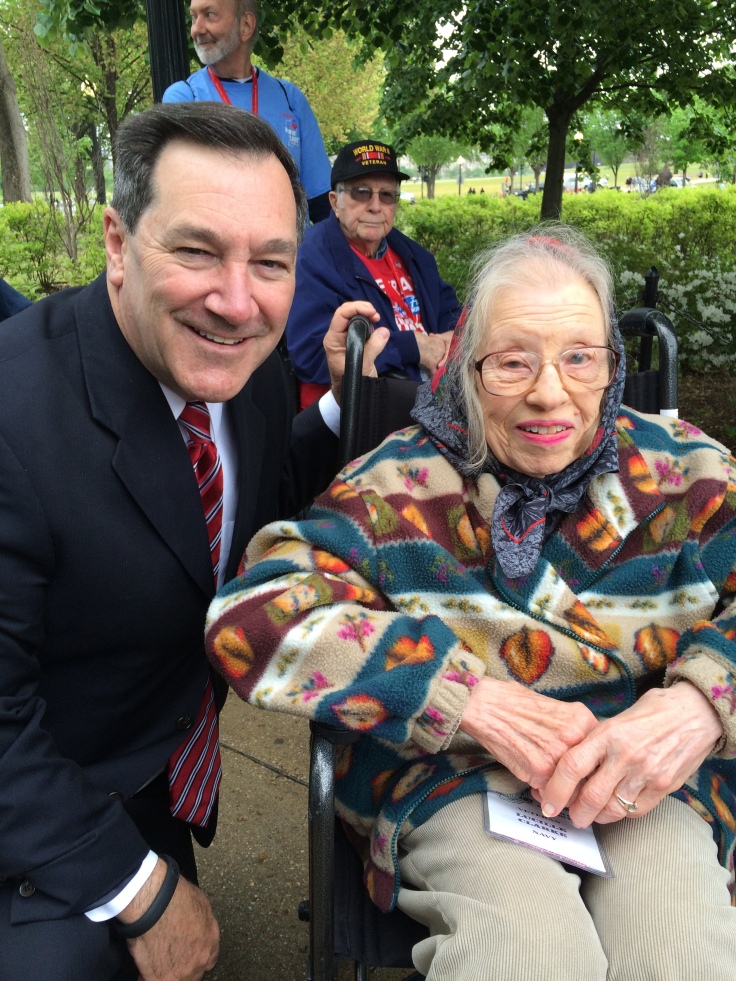 For the next several hours, our group of nearly 200 people toured the World War II, Air Force, Vietnam, Korea, Iwo Jima memorials. Former senator Bob Dole, a World War II veteran, and Indiana Senator Joe Donnelly met our vets at the memorials. Senator Dole was one of the people who helped raise money to pay for the memorial using only donations, not taxes.

Since Lucille was born in Missouri, we took her photo in front of that pillar at the WWII Memorial.

The presence of Lucille and two other female veterans in our group caused us to visit the Women in Military Service for America Memorial. This was a new memorial for me! 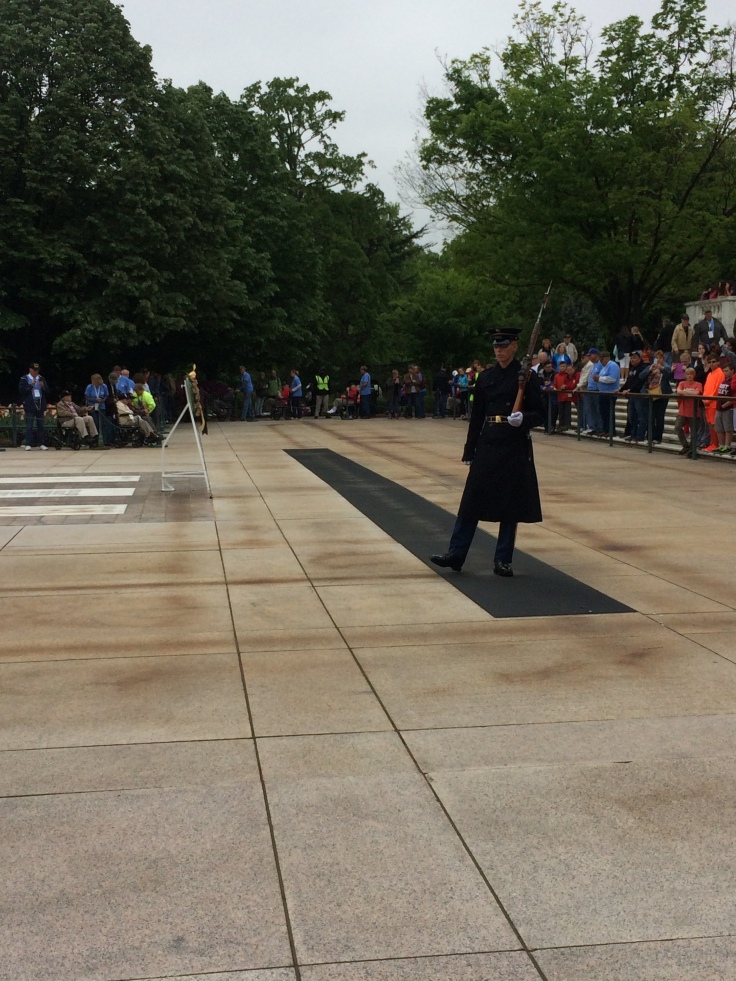 A group shot of the vets is always taken at the World War II Memorial. We also watched the changing of the guard at Arlington Cemetery. Lunch and dinner meals were prepared by professional caterers and eaten on the buses. By the time our group arrived at Reagan National to go home, we were all tired, but the day was only half over. 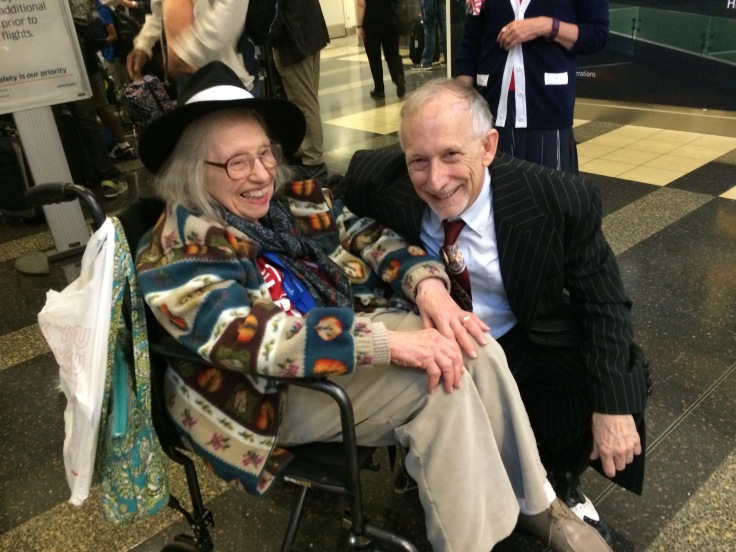 A large group of swing dancers dressed in 1940s-era clothing visited and even danced with our vets in the terminal. One male dancer placed his hat on Lucille’s head. When I texted the photo of Lucille with a big smile to her daughter, the daughter replied that she had never seen her mother smile so widely!

During the flight home, the vets were given packets of notes, letters (many from family and friends), again thanking them for their military service.

The biggest surprise may have been the group waiting to greet the vets at Fort Wayne International Airport as they disembarked. An estimated 3,500 people of all ages stood inside the terminal and outside under the rental car awning, waving flags, cheering and offering handshakes.

It was an emotional day. Even though I’m not related to Lucille, I believe she’s a dear lady who served her country during its time of need and she was deserving of the attention given to her for her Honor Flight of Northeast Indiana.

I thought that would be my last trip—how lucky can one girl get to take a veteran she’s not related to on a trip?

But another veteran, a 95-year-old Army veteran who fought in the Battle of the Bulge, has asked me to accompany him on September 22, 2016. I’m so thrilled I can hardly catch my breath!

I promise photos of that trip in the near future! Please pray for our vets around the world for safety, peace and courage. They experience more than most of us ever will.

Please thank a veteran for his or her service today!

Honor Flight of Northeast IN

4 thoughts on “What is an Honor Flight?”