I regret missing the opportunity to post on Holocaust Remembrance Day, observed around the world on April 24, 2017. Hopefully, this special essay written by a soldier who was one of the first to liberate Ohrdruf, one of the first death camps discovered in Germany, will make up for the lateness.

I met Edward Thomas Bradley a few years ago. It was a privilege to talk with him, although the story was sorrowful. I wrote the story of his military career at the beginning but his essay at the end is worth reading in its entirety. Mr. Bradley is now deceased.

Please pass on his story in this post to teachers, parents, students who need to be aware of what can happen when a government is out of control. God bless America!

He was part General Patton’s Third Army marching with the 89th Infantry division during World War II. In April 1945 he was part of a combat group that was the first to drive Sherman tanks through the locked gates of a concentration camp at Ohrdruf, Germany.

Unfortunately, Bradley’s group was too late to save thousands of slave laborers, civilians and most German women whom the Germans had starved ill-used. “We were dismayed to see heaps of emaciated dead bodies, some shot and others just charred remains,” he said. “We was told most of the surviving women had some type of venereal disease.”

The Allied medical personnel helped the sick as much as they could.

Born in Altoona, Pennsylvania, in 1925, Bradley graduated from Altoona Catholic High School in 1943 and was drafted into the United States Army in February 1944.

Bradley completed 17 weeks of basic training at Camp Wheeler, GA, before being assigned to the 89th division stationed at Camp Butner in NC.

In December 1944 Private first class Bradley and other soldiers debarked from Camp Miles Standish in Boston across the Atlantic. “We were never told where we were going,” he said. “We assumed the   destination was England.”

Bradley’s ship landed at Le Havre, France, in January 1945. A fierce battle that became known as the Battle of the Bulge had begun there on December 16, 1944. It acquired that name because when Hitler ordered a massive attack against American forces, it created a bulge in the Allied front line.

A foot of snow lay on the beach. “We held rifles over our heads to keep them dry,” said Bradley.

They then discovered to their horror the camp at Ohrdruf.

After liberating Ohrdruf, Bradley’s unit was involved in a battle with the Germans in Luxembourg at the Moselle River. Though often scared, Bradley refused to give in to his fear. The end of the war was in sight.

“The Germans’ Tiger 88-millimeter cannons were superior to that of any other nations’ artillery,” he said. “But their tanks needed much fuel and they were running low. Plus we had more tanks in number.”

The war in Europe ended in May 1945. Not all of the five million American troops could return home right away. Bradley was assigned as a military policeman guarding WAC nurses dormitory in England.

Bradley was discharged May 19, 1946. He returned to Altoona, where he earned a degree in economics at Pennsylvania State University. He lived with his Wife Pauline and three sons in Bedford, OH, for 32 years, while working at Ford Motor Company for 32 years. He is now deceased.

Fifty years after the gruesome discovery of Ohrdruf, Bradley wrote an essay about his perception of that day and how it affected his life.

Note: The details listed here can be upsetting. Please read with caution. 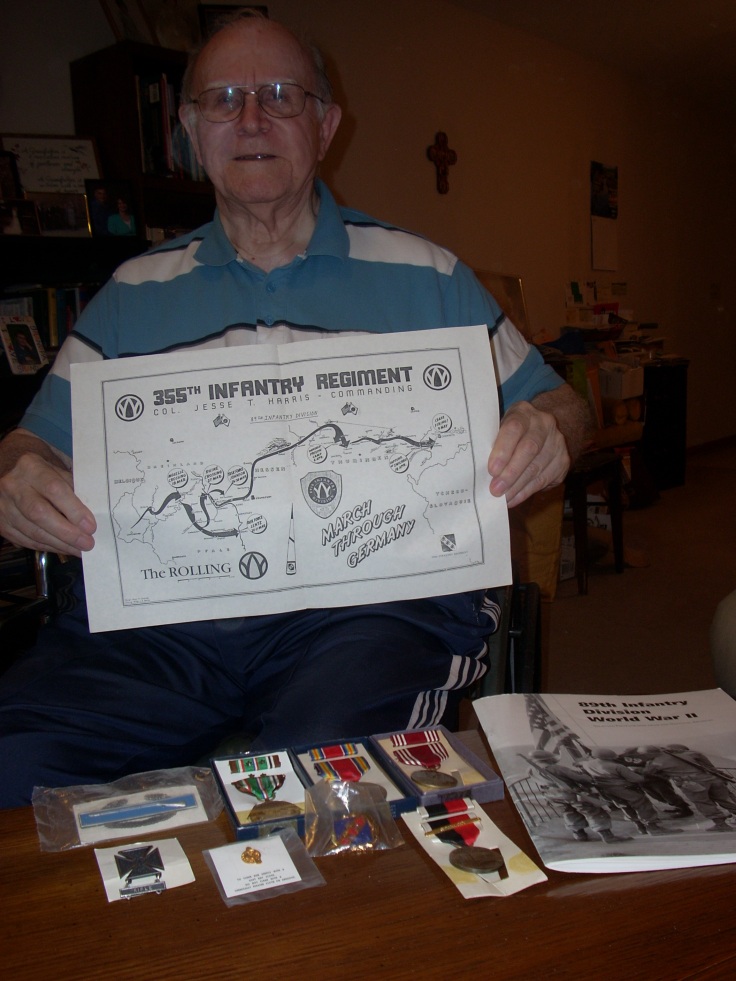 “Throughout each person’s life there may be an experience or incident that is so overwhelming, so momentous, that it is forever indelibly impressed in our memory.

Such was an experience for me during World War II while serving as an infantry soldier in General Patton’s Third Army marching and fighting through Central Germany with the 89th infantry division.

Ohrdruf was the name of a small town approximately 15 miles south of the ancient city of Gotha. We found out later that five months prior to our arrival it had been a Germany OCS training camp.

Then it was closed and it became a camp for slave laborers mostly from Eastern Europe.

As our tanks and infantry approached this camp, we had no idea what to expect.

We were prepared for fighting enemy soldiers. But German soldiers had abandoned the camp because they heard we Americans were near and fast approaching.

I was among the first American soldiers to enter this camp, being part of a combat team approaching this unknown objective in super readiness prepared for the worst.

After a brief search of the area, it was determined there were no German soldiers in the area but still we had to make an in-depth search.

After moving along a short distance, I found myself in sort of a courtyard. To my right was a heap of riddled bodies, the mortal remains of perhaps 30 inmates who apparently had been machine-gunned shortly before our arrival by the German army after they knew the American army was closely approaching.

All of the inmates were lying there just as they fell, emaciated, starved, barely skin and bones. Among them was an American Air Force Lieutenant who had been wounded but had been callously shot while lying on a stretcher.

I moved forward past some loathsome buildings down a path to an open shed. Inside was a heap of 40 bodies, stripped of all clothing, piled up like logs—all dead having been massacred and then covered with chlorinated lime with a terrible stench emanating from the pile.

These deaths were reportedly the result of beatings with a shovel- 115 strokes on the naked body which was standard punishment for minor infractions of the rules. Naturally nobody ever survived these beatings.

I entered a building that turned out to be a crematory– huge steel doors at each end with neat little tracks entering from each direction so the victims could be rolled in and out.

I moved out of the crematory building and up the roadway some distance where I approached a ditch probably 10 x 20 feet with charred logs.

As I got closer, I realized human remains were mixed in with the charred logs.

Further down the road, I encountered a huge pit where reportedly 1000s of bodies were buried. Later, estimates numbered around 9,000 bodies were buried in this common pit. These were not soldiers but non-combatant civilian slave laborers.

At this point my company was recalled to the front gate area where we assembled and exited this ghastly horrible place to continue our drive through Germany. All of us were stunned in disbelief as to the horror we had just witnessed. We left the sorting out to near echelon troops.

The next day it was reported that General Eisenhower, General Bradley, General Patton and all of their staffs visited this camp and viewed these atrocities. General Patton’s reaction to what he viewed was reportedly to run behind one of the buildings and violently throw up.

Eisenhower was to have said that it was the first time in his life that he was actually ashamed that his ancestry was Germany.

Army photographers took photos as evidence to the world of the horrors that took place behind these fences. Copies of these photos were promptly forwarded to both the US and Britain’s top government officials.

This camp at Ohrdruf — this death, or killing, camp –was the first camp to be liberated that provided indisputable factual evidence of what was actually happening in these German so-called labor camps.

It proved to be just the tip of the iceberg as shortly many other and larger death camps would be liberated, including Dachau, Auschwitz.

Before this experience, I thought this type of barbarism happened only in history under the likes of Attila the Hun. Maybe because I have some German blood in my ancestry I thought we were fighting an enemy with some resemblance to Roman civilization which might remotely be compared to ours.

Those feelings were destroyed completely that day.

Probably a relative minority of the German people knew about it or had any connection with this monstrosity. However, the people as a whole must bear the blame for allowing such fiends to rule their nation.

Before the experiences of this day I had some personal reservations and questions about what we were really fighting for in that war.

That day I received the answer.

It gave me increased motivation to get that horrible war over with.

I also lost any compassion I might have had for the German soldiers.

It has now been 50 years since these events occurred. In some people’s minds the German Holocaust never took place. Some others are working to distort the facts by downplaying its magnitude.

I want my children, grandchildren and any other person who reads this narrative to know that it actually did occur in all its horror as I was a firsthand witness to this hideous, barbaric experience in this ugly page of human history.

Please remember to thank a veteran today for his/her military service. We have no idea what they go through, but we need to assure them we appreciate it.