“At 0800 hours on Sunday, December 7, 1941, a cacophony of unfamiliar noises on Ford Island caused Seaman 2nd class Richard Girocco and other seamen from his PBY squadron (‘patrol bomber’) to run outside of their aviation hangar. Ordinarily, the seamen would be resting on their bunks. Today, they had been ordered to prepare to move equipment from Pearl Harbor to Perth, Australia.

The sight of planes in the sky didn’t immediately alarm them. “We thought the Army Air Corps was dropping flour sacks for practice,” said Girocco.

As he and the others continued to gaze upward, they noticed with growing dismay the machine gun fire erupting from the planes. The young American seamen realized the planes were part of the Japanese Imperial forces. Their pilots were firing on Ford Island. Pearl Harbor was under attack!”

It is hard for us to imagine what it would have been like on this date, 78 years ago, when hundreds of Japanese aircraft conducted a surprise blitz on the American Naval Fleet stationed at Pearl Harbor at Hawaii.

Seven American battleships were sunk or too crippled to be of use. One of the sunken ships included the USS Arizona, which lost 1,177 crew members.

While primarily targeting battleships and carriers, Japanese fighters and dive-bombers strafed and bombed the flight line and hangars at Hickam Field where dozens of planes sat on the ground.

Nearly half of the airplanes at Hickam Field were destroyed or severely damaged. The Hawaiian Air Depot, base fire station, chapel and guardhouse were all hit and thousands of people killed, including civilians.

The second wave of the Japanese attack struck Hickam at 8:40 a.m. By 9:45, the attacks was over and the Japanese pilots long gone.

The assault at Pearl Harbor was part of a plan to eliminate America’s potential challenge to Japanese control in Asia. The Japanese believed such drastic measures would prevent a counterattack.

A day after the attack, President Franklin D. Roosevelt delivered a stirring announcement to the American people, encouraging them to stand up to the aggressors. On December 8, the American Congress declared war on the Axis countries.

While the incident still represents the U.S. Navy’s greatest disaster, the Japanese had not counted on one thing — the American people’s desire for vengeance. Four years later, they would learn about that as they surrendered for the first time in Japanese history to the Allies.

Dick Girocco’s story was relayed to me during an interview and is included in my book, They Did It for Honor: Stories of American WWII Veterans. It is Book 2 in my WWII Legacies series.

Other vets have relayed to me where they were upon learning Pearl Harbor had been attacked. As you’ll read, most Americans did not know where Pearl Harbor was. But they knew the news was serious.

Millard Schwartz was driving home from a shift at a sugar beet plant in Decatur, Indiana, when he heard on the radio about the Japanese attack. “I had no idea where Pearl Harbor was,” he said. “Everybody was upset wondering what the enemy would bomb next.”

Born in 1921 in Berne, Schwartz had quit school to help his father on their 80-acre farm. In November 1942 he was drafted into the United States Army and served his country in Europe fighting in the Battle of the Bulge and other areas.

His story is detailed in my book, We Fought to Win: American World War II Veterans Share Their Stories.

Doris Eileen Stuckey Zeissig of Berne was on duty at Lutheran Hospital in Fort Wayne, Indiana, on December 7, 1941, when she and other medical staff heard about an attack by the Japanese of the American Naval base of Pearl Harbor. “We had never heard of Pearl Harbor and wondered where it was,” she said. After learning about the destruction done to so many American troops, Stuckey, like most Americans, wanted to help the war effort. She enlisted in the US Army and served troops stationed in Europe.

Her story is also told in They Did It for Honor: Stories of American WWII Veterans. 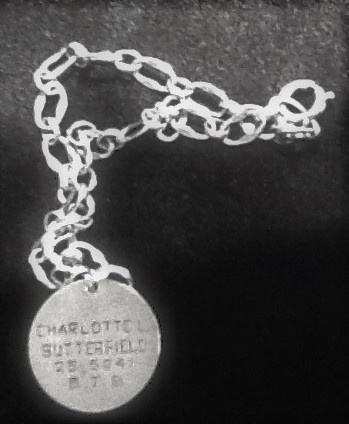 In my new book, It Was Our War Too: Youth in the Shadows of WWII, Charlotte Butterfield Schnieders was a child living in Honolulu in December 1941. Her mother, a nurse at Queen’s Medical Center (then Queen’s Hospital), worked long hours following the attack. Charlotte’s father, George Butterfield, worked as a civilian machinist at Hickam Field, trying to restore order to the mangled mess.

The military base of Pearl Harbor had been established in 1935 as Hawaii’s principal army airfield and bomber base.

In 1900 the series of islands in the South Pacific called Hawaii became a United States territory after a two-year period of annexation. In 1959 the area was granted statehood along with Alaska with Hawaii being declared the 50th state to be added to the Union.

Charlotte stayed with her grandparents while her parents worked. Martial law was established in Hawaii and Charlotte and other preschoolers had to wear an ID bracelet for several years. Her ID bracelet is pictured above and in the book. Older civilians carried a paper ID form. Charlotte was too young to carry a gas mask, which was issued to every Hawaiian civilian over the age of seven. The masks were to prepare for the possibility of poison gas attacks or air raids.

Despite the tragedy of Pearl Harbor, Dick Girocco stayed in the Navy. After retiring, he moved to Hawaii and served as a volunteer at the Pacific Aviation Museum Pearl Harbor.

“Pearl Harbor was the most difficult part of my military experience,” he said. “I’m encouraged by the number of young visitors who show interest in our nation’s military history. I’m proud of our country and what we did to save it on December 7, 1941.

That kind of courage and dedication is what makes our nation great. Thank a veteran today for his/her service.

The women who chose to serve in #wwii were brave, adventurous, patriotic. I've included stories about female vets in all 3 of my WWII Legacies books, including Charlotte Eisenhart (second from left) served in the Army in Seattle. Mary Ann 'Marty' Wyall became a WASP (Women's Air Service Pilots). We are pictured here with veteran & outstanding #Bellmont High School teacher Brian Lineberry who teaches a course on WWII. Read & be inspired. #iloveveterans #USArmyhistory #Womenvets #airforce
Perfect gifts for the history lover, Baby Boomer, military loved one. The Bridge Church in Decatur 9a-2pm. #wwii #Christmasgifts
Is your mailbox as cute as this one? Order online items soon to allow time for delivery before Christmas. #wwii #iloveveterans