In honor of African American History Month this February, I pay tribute to the struggles and achievements of the people and events that have shaped our nation. Today I share the story of Vaughan Whitworth of Los Angeles, California. Whitworth fought as part of the 4th Marine Division, 7th fleet, 51st and 52nd Battalion in the South Pacific.

I met Vaughan through a family member who met him on a cruise. My phone interview with Vaughan went well and taught me many things about our nation’s history.

Excerpts from my story of Vaughan in We Gave Our Best: American WWII Veterans Tell Their Stories:

“When asked if I ever shot anyone,” said Vaughan, “I say that in the military you are trained to shoot and kill. When engaging in warfare, it’s either you or the enemy who will survive.”

Whitworth was born on April 16th, 1925, in Roanoke, VA. After graduating from Lincoln Academy High School at Kings Mountain, NC in 1942, Whitworth followed an older brother’s footsteps of military service by enlisting in the U.S. Marines.

In 1943 basic training for black Marines was conducted not at Camp Lejeune, NC, where white Marines trained. Instead, they were sent to Montford Point, near New River, NC.

“We black Marines lived in a former Civilian Conservation Corps camp which we reconstructed and built up,” he said. White drill instructors (DI’s) trained the recruits, but Whitworth didn’t notice any discrimination. “I don’t think our DI’s treated us any worse than if we had been white recruits,” he said. “They were strict and straight to the point.”

That changed when the Montford recruits were trained by blacks DI’s. Whitworth considered them much tougher. “They told us the white military brass believed we black men could not do the job. They were hard on us because they wanted us to prove we could do it.”

In December 1943 Whitworth disembarked from Norfolk/ Portsmouth, Va., aboard the USS James O’Hara troop transport. Upon arriving in the South Pacific, black Marines were assigned limited duties. “We were not allowed to engage in warfare,” he said. “We were not considered good enough to defend our country.”

Whitworth was assigned to the 2nd Marine Division with a depot company. “Our duties were to take supplies to the front lines and bring back the dead and wounded,” he said.

From February through June 1945, Vaughan participated in some of the Pacific’s fiercest fighting at Saipan, Tinian, and Okinawa.

Gradually, the orders that prevented black Marines from engaging in combat on the front lines changed. In May his unit was stationed at Ie Shima Island which was used by the Allies as a storage supply base.

Though scared to finally be at the front lines, Whitworth told himself he could do it. “I had grown up hunting and knew how to handle a gun,” he said. 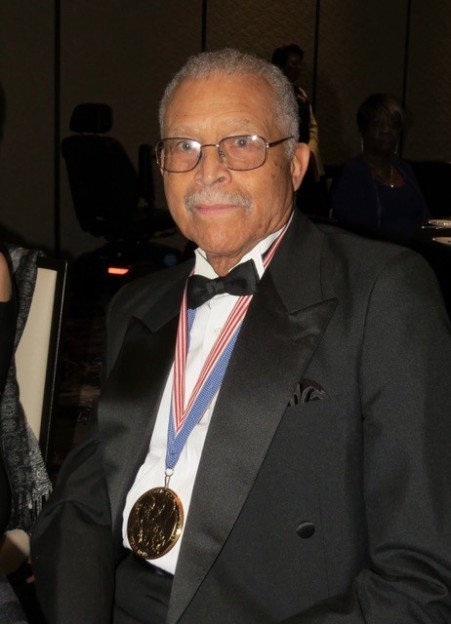 After the war, Vaughan worked for Lockheed Aircraft. He married in 1951, and he and wife, Carolyn, became parents to one daughter. He attended church and helped his community.Over the years, the Montford Point Marine Association has commemorated the 20,000 men who trained there.

In 2012 Vaughan and other Montford Marines were awarded the Congressional Gold Medal for their service during World War II.

Vaughan was chosen to participate with Gary Sinise’s Soaring Valor flight to the World War II Museum in New Orleans.

Sadly, Vaughan died in December 2019. He was a kind, friendly man I was privileged to meet while writing this book. Though we didn’t meet, I feel his loss as another vital part of our nation has gone. But his story has been preserved.

While seeming to harbor no bitterness for the way he and other black Marines were treated, Vaughan added this: “I appreciate what the Marine Corps has done to advance blacks in rank,” he said. “Two black generals put the Congregational Gold Medal around my neck. Tears came to my eyes. That’s something I never thought I would ever see. We had nothing like that when I served.”

Note: In 1948 US President Harry Truman passed Executive Order 9981, which declared “There shall be equality of treatment and opportunity for all persons in the armed services without regard to race, color, religion, or national origin.”

Read more about experiences of our World War II veterans in my books available on Amazon.