Recently, I had the opportunity to interview Craig Ashurst, lead dancer for the famous dance group, Riverdance. After seeing this show, now I know why people have talked about it so much in the past decade. Fabulous! Go see it if you can. This is the troupe’s last tour.

Let’s say you’ve lived on the moon since 1995 and have never heard of Riverdance. You would not know the Irish dance organization that began as a result of a seven-minute segment at the Point Theatre, in Dublin in February 1995 has now performed on stage 10,000 times, or been seen live by over 22 million people in 32 countries across four continents.

You also would not know that three million copies of the troupe’s Grammy Award-winning CD and 10 million Riverdance videos and DVDs have been sold.

Okay, so maybe the average person would not know these stats, but thanks to the troupe’s popularity and propensity for travel, the name ‘Riverdance’ brings a definite image to most people’s minds – a record-breaking line of 100 Irish dancers, step-dancing across a stage to exhilarating and exhaustingly fast Celtic tunes.

Some amazing performances for Riverdance have taken place at the tenth Anniversary celebration at Radio City Music Hall in NY and on the Great Wall of China. 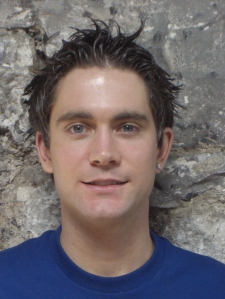 While tap-dancing at such famous locales might be incredible, Craig Ashurst is content traveling across North America as head dancer for the Farewell tour of Riverdance.

Riverdance will perform on The Embassy Theatre stage on Wednesday, February 9, at 8 p.m.

Ashurst
started dancing at age five in his home town of Melbourne, Australia.

“My mum born and sis were born in Ireland and emigrated to Australia shortly before I was born,” he said while enroute with the Riverdance entourage through Missouri. “Dancing was part of my Irish heritage and as a teen, I knew I  wanted to perform it as a career.”

Ashurst joined Riverdance in 2005. Since then, he has performed as a dancer with the tour in Asia, North America, and Europe.

Today, at age 27, Ashurst leads the Riverdance pack, comprised of dozens of other dancers, on tour through 76 cities in five months. They perform on stage an average of eight shows per week.

Dancing may be the easy part. What Ashurst finds challenging is keeping his performance fresh. “Each night before  I go on stage, I look for a different method of inspiring myself to perform,” he said. “I may listen to a bit of music to pump myself up, or watch someone dance who I admire.”

That’s not to say Ashurst doesn’t look at the Riverdance tour as a dream come true. “I toured with other groups before Riverdance and this is a pinnacle for me,” he said. “We have a live band and once the dancers take the stage, you can tell it is filled with people who really want to be there. The energy is contagious and we strive to make it fun for the  audiences.”

According to Ashurst, one of the perks to traveling with Riverdance is having your family visit and see the show. “My  mum has seen me dance,” said Ashurst. “Dancing for family and friends who have guided me through the years has meant so much to me.”

What, in his opinion, makes Irish dancing so popular? “I think it is the passion and beauty of the line dancing and the culture it comes from,” said Ashurst. “Riverdance is a special style of dance that has become a respective art form in many English-speaking countries. It’s not only fun, but great exercise. And the music of the show is so incredible that no matter your mood, it helps you feel good. I definitely love what I do.”

As for this being Riverdance’s Farewell tour, Ashurst admitted he does not plan what to do after the tour is completed. “I’m enjoying this role as lead dancer and putting off  looking into the future,” he said. “I’m just thinking about doing the best I can in each city and contributing to one of the world’s best entertainment projects.”