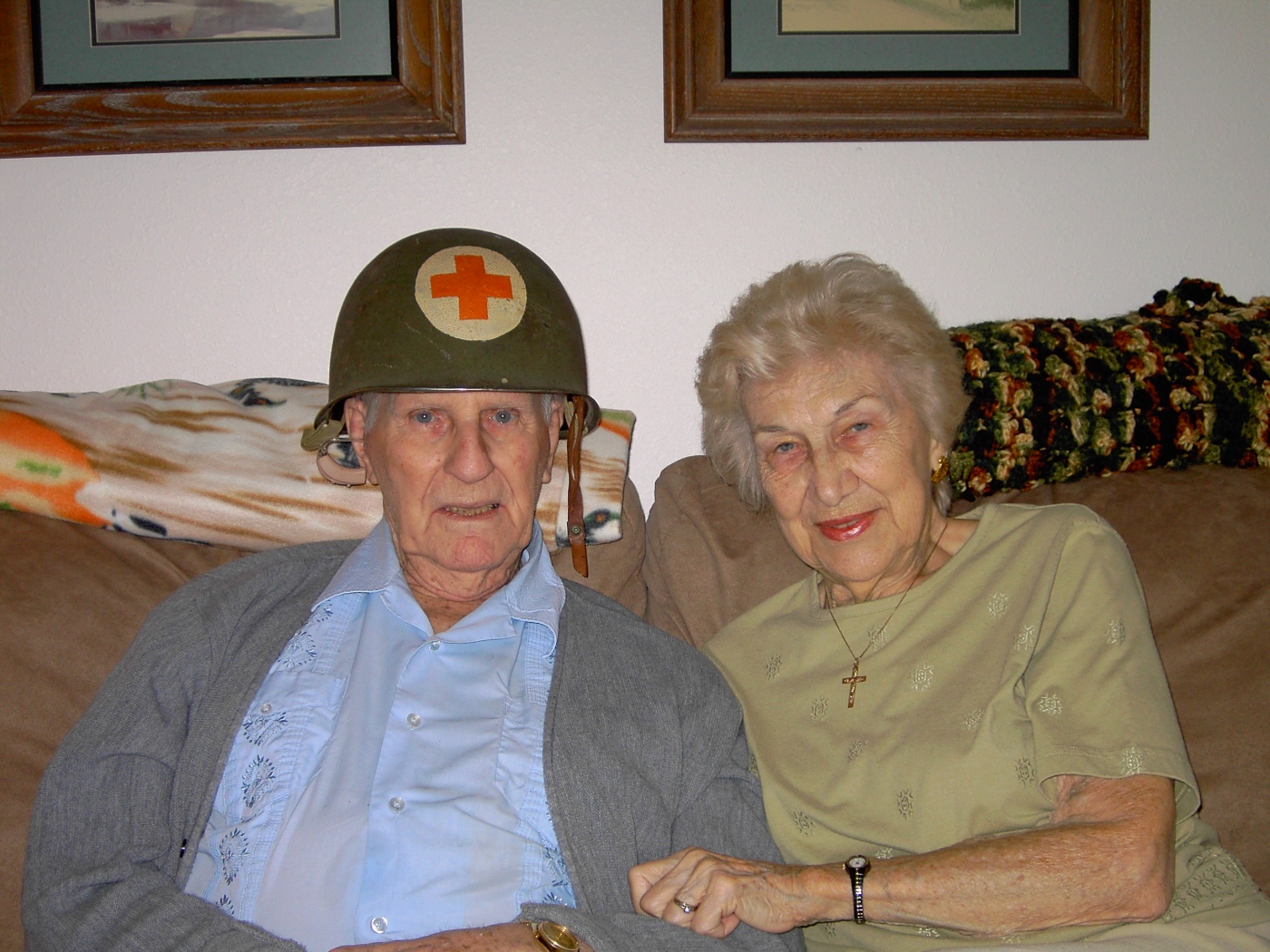 This story is the result of interviews with a couple I met while working at a retirement home. They were the first couple I had met who had both served in the military. I admire them both.  I didn’t have photos of them in uniform but the helmet is pretty awesome!

Jeannette and Bruce Kenline spent their lives in service, first as American soldiers, then ministering in churches.

A native of South Bend, Jeannette was a student at Indiana University for two years, majoring in business, when she enlisted as a Navy WAVES in 1944. (WAVES stands for “Women Accepted for Volunteer Emergency Service”)

According to the Naval Historical Center, 27,000 women were recruited as WAVES within the first year of the war. By the end of the war, 80,000 WAVES were serving the US.

“You had to be 20 years old to enlist as a WAVE,” said Jeannette. Why did she want to join the Navy? “I had flown in a friend’s plane a couple of times and thought it was great,” she said. At that time the Army Air Corps, later known as the Air Force, was still in its infancy.

Unfortunately, Jeannette’s dreams of going up in a Navy plane didn’t materialize. She was stationed first at a base in Norman, Oklahoma, then at a naval station in Jacksonville, Florida, where she was assigned the duties of an Aviation Machinist Mate. As soon as she could, Jeannette transferred to an office job. “I discovered I didn’t like taking apart carburetors,” she said.

Bruce graduated from East Rockcreek High School in Markle in 1939. Following graduation, he enrolled at Indiana University as a pre-med major. When he enlisted in the Navy in 1942, his pharmaceutical training from college qualified him to serve as a medic.

Bruce participated in fighting at some of the fiercest battles of the war, including the Omaha Beach invasion at Normandy.

Between June 1940 and May 1945, Normandy was part of the German occupied zone of France. During the War, the Allies coordinated a massive build-up of troops and supplies to support a large-scale invasion of Normandy. This included amphibious landings by troops on Landing Ship Tanks (LST). “The front end extended into the water, and then dropped open, allowing soldiers easy access to the beach,” said Bruce, who rode on an LST.

His job as a medic was to mend wounded soldiers. It was a gruesome task with Germans dug into fortified locations above the beaches and shooting steadily at the Allied forces. “Bruce saw a man running without legs as they portrayed in the movie Saving Private Ryan,” said Jeannette.

Bruce survived Normandy only to be shot by a sniper at a later assignment in Okinawa. As a result of his injury, Bruce was sent home. During one of his stops to the island of Guam, he and other wounded Allied soldiers heard about the US dropping of the atom bomb on Japan in August 1945.

It was a momentous occasion for the battle-weary soldiers. “We knew the US had been working on an atom bomb,” said Bruce. “We hoped the war would end soon.”

Back in the US and honorably discharged from military service, Bruce returned to Indiana University where he met Jeannette who had been discharged in 1946. They married in 1947.

After graduating from IU with a business degree, Jeannette obtained her teaching license from the University of St Francis in Ft Wayne, later earning a Masters degree in Education from the same institution. Jeannette taught business and social studies classes at Norwell High School.

Bruce didn’t finish his pre-med degree, but began working with his father in the Ft Wayne area in a home decorating business. Following a trip to Africa 1965 with Dr. LeRoy Kinzer of the Markle Medical Center and Reverend Ernie Shoemaker, Bruce changed his vocation to that of a minister. He enrolled as a student at Taylor University in Upland, Indiana, and obtained his license to preach in 1970.

Bruce began preaching at the Tocsin United Methodist Church and later Greentown, IN.

Over the course of their lives the Kenlines traveled to China and Russia and raised three sons. In summing up her life in service to God and country Jeannette said, “It is full of amazing grace!”

Note: Jeannette and Bruce Kenline died in 2011 in May and November, respectively.