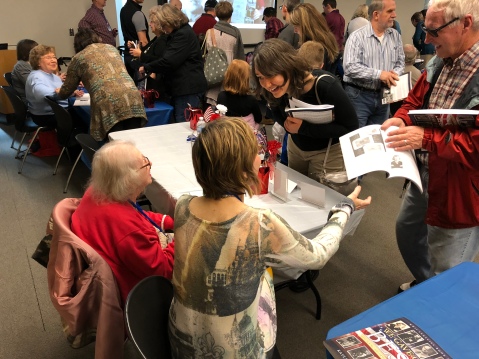 That’s how Lucille Clarke, 98-year-old Navy WAC (pictured above) who served as a secretary during World War II, described her experience at my book launch on Nov 3 at Allen County Public Library which hosted the event. 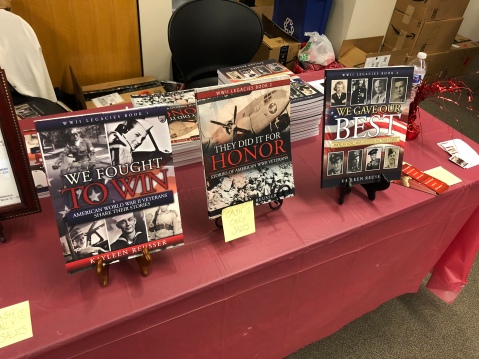 Lucille is one of 34 World War II veterans whose stories are told in my book, We Gave Our Best: American WWII Veterans Tell Their Stories. All vets from this book were invited to attend as guests of honor. Some live out of state and were unable to attend. A few are deceased; others were too ill. Lucille and 11 other vets were among those who accepted my invitation. This is Book 3 of my WWII Legacies series which includes We Fought to Win: WWII Veterans Share Their Stories (Book 1) and They Did It for Honor: Stories of American WWII Veterans (Book 2). 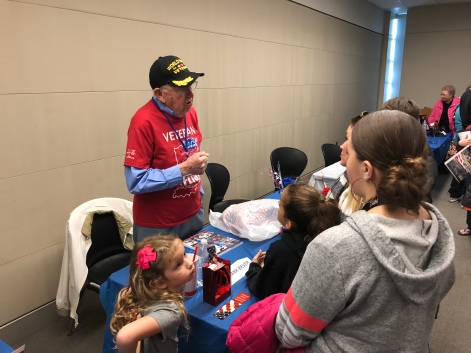 Frank Bever (above), who served in the Army in Europe, and the other vets were greeted by approximately 150 people of all ages. The public was encouraged to tell the vets thanks for their service. The vets would also sign copies of the books. 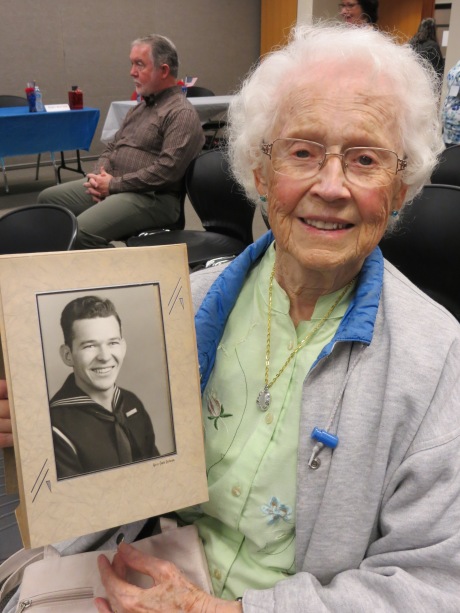 Seaman Paul Bandelier is deceased, so his wife and their children attended to represent him. 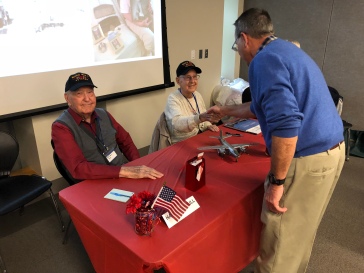 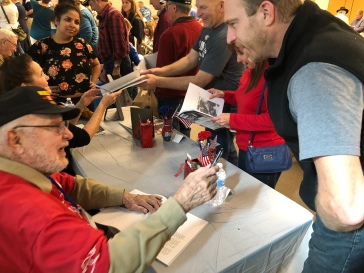 Bill Dunn served in the Navy in the Pacific.

Lots of smiles from the veterans reassured my volunteers and me that everyone was enjoying the day. 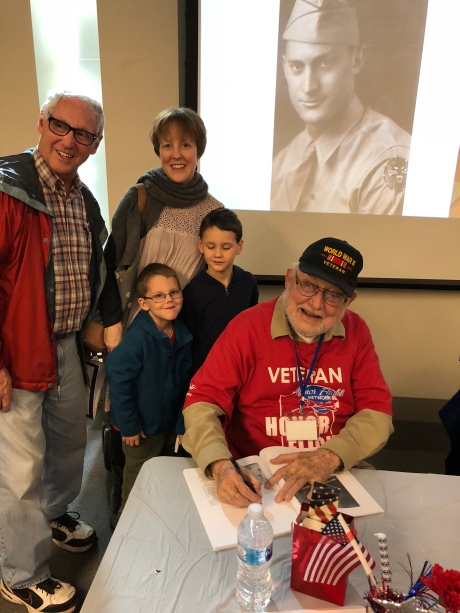 Bill Dunn , a member of the Navy served in the Pacific. He was represented by three generations of family, making a very special day! (Note: The photo in background is of another vet and part of a Powerpoint display that played throughout the day.) 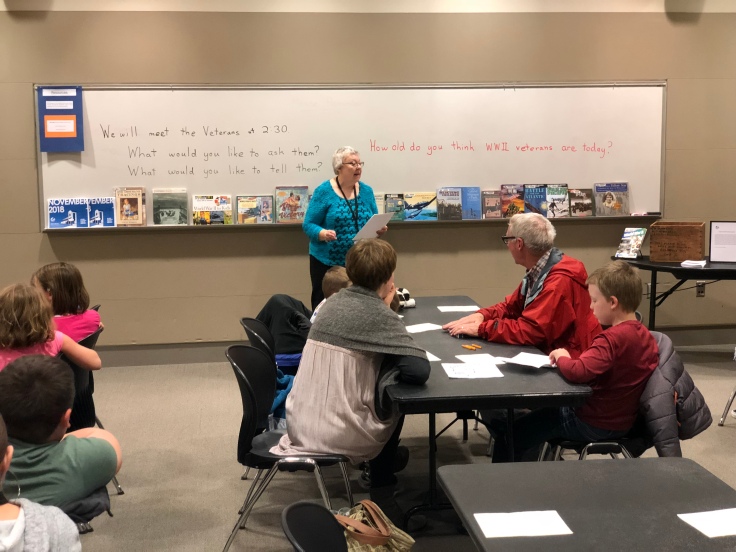 Bill’s daughter Miriam Rose, who works in the Children’s Dept. of Allen County Public Library, offered intro classes to students before bringing them to meet the vets! I love the idea of making history come alive for all ages! 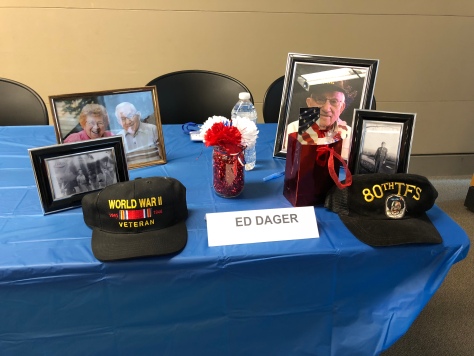 Ed Dager, deceased, was represented by family who brought items to display for the public. 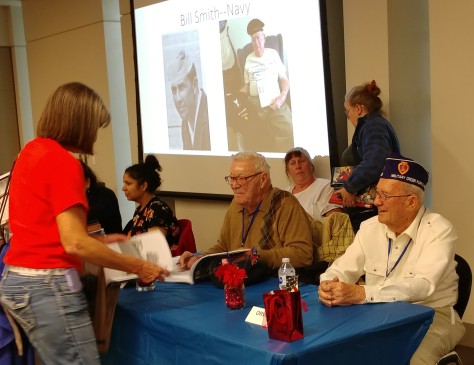 Mark Flanagan (left) and Orval Haaff (right) both served in the U.S. Army in Europe. 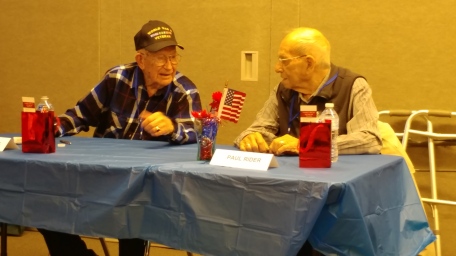 Alvin Ping (left) served aboard a submarine, while Paul Rider (right) was part of the U.S. Cavalry– even though he didn’t know how to ride a horse! I loved seeing these guys get to know each other. All of the vets are well into their 90s but appeared much younger! 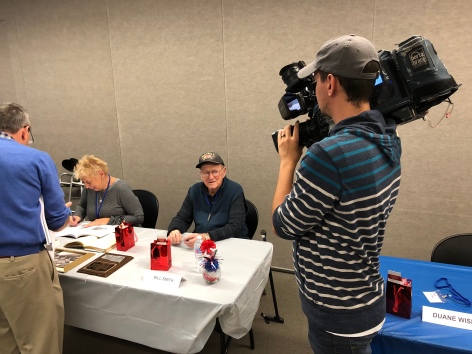 A local TV station, Channel 15, captured highlights of the event which were broadcast later. Bill Smith, who served in the Navy, was one who caught their attention. 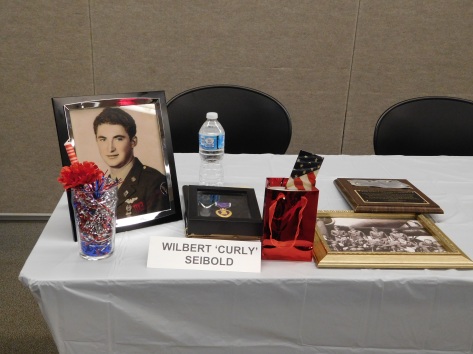 Curly Seibold was an Army Air Corps crew member whose plane was shot down, forcing him to be captured by Germans and held as a prisoner for a year. He was unable to attend, due to health, and was represented by family who brought photos of him, a plaque of a piece of his downed plane and his Purple Heart. 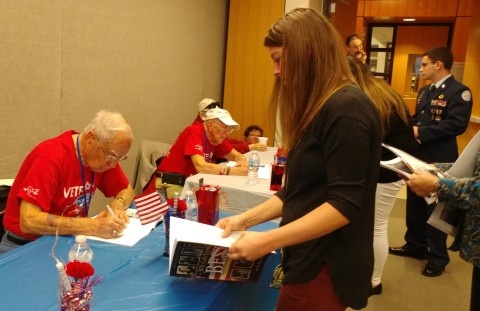 Rudy Wuttke served as a radio mechanic in Iceland for the Army, while Paul Young flew over Italy as a “Bridgebuster.”

I was so proud of them and everyone who showed up to support them and me. It was a highlight of my life. Thanks to all who attended to show these vets they are not forgotten!

This week we have had the chance to gather with friends and family to celebrate a national holiday and reflect on our blessings. My family is divided among locations around the world but I’m still thankful and pray that each person receiving this will count his/her blessings and attempt to share the same with others. Happy Thanksgiving!

PS: If you’ve purchased my World War II books on Amazon, would you consider placing a review there as well? Reviews help people find my books and hopefully the message of our great national heritage will spread.  Thanks for your support!