She sat near the back, one of perhaps three dozen people in the audience.

I had been hired to give a talk about my World War II Tour of Europe at a retirement home near where I live. I enjoy giving these talks, especially to groups of people who may have lived during that time. They often share with me with personal insights and experiences that enhance my understanding of that era.

I barely noticed this particular woman as she sat quietly listening as I explained to the group that eight years ago I wrote a weekly column for a newspaper. When my editor recommended an interview with a local World War II veteran, I agreed, though knowing nothing about WWII.

The veteran’s name was Carl Mankey.

Mr. Mankey described his participation in Marine battles on the islands of Tinian, Tarawa, Peleliu in the South Pacific. He was the recipient of two Purple Hearts, meaning he had been injured twice in battle.

I came out of that interview two hours later with a multitude of emotions. All of the information was new so it was overwhelming.

But even more startling was the realization that Mr. Mankey and the other troops had made history that day and during the rest of the war. It had been exciting to sit in front of a living piece of history!

It seemed more than the people who read my column needed to know the story of this man who had helped to free our country. With this introduction to World War II, I began searching for more veterans like Carl.

That dedication has led to 250+ World War II interviews and four books of stories. Each interview has been an adventure and honor.

Carl’s story is featured in my first book, We Fought to Win: American World War II Veterans Share Their Stories. Here is an excerpt:

In June 22, 1944, Marine Private First Class Carl Mankey led 20 men from his squadron up a mountain in Saipan in the Mariana Islands. Mankey’s goal was to destroy a Japanese machine gun nest that had fired for hours on Allied troops. Disregarding heavy fire from the enemy, Mankey moved into the open to shoot with his rifle and throw grenades, hoping to disrupt the firing. Failing to hit the target, Mankey refused to give up. He returned to the machine gun nest, repeating his brave actions. This time he completely destroyed it.

Mankey, a graduate of Kirkland High School in Adams County (Indiana) was employed as a truck driver and living near Craigville when he enlisted in the Marine Corps in January 1943. Why did he choose the Marines? “I figured they were the toughest soldiers,” he said. Mankey trained in San Diego at the Marine Corps Recruit Depot where he was assigned to the 2nd Marine Division, 6th Regiment, Company B. He received more training in New Zealand before experiencing his first look at war. 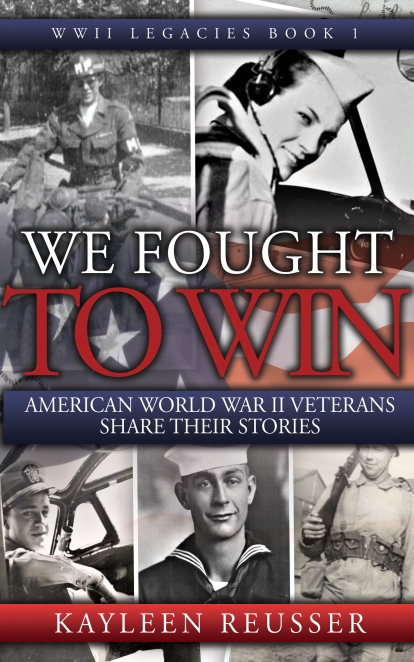 You can purchase the book here.

Each time I speak to a group I tell of my meeting with Carl and how it inspired me to learn and record our nation’s military history.

While speaking to the group at the retirement center, I asked if anyone had known Carl. The lady I had spied earlier raised her hand. “He was my brother,” she said.

We chatted after my talk concluded. She said she was his older sister. Carl died in 2016. If still living he would be 96 years. She is 100 years old.

With tears in her eyes she said she still missed him. I told her how his story is part of all of my talks.

“I think he’d be happy knowing how he has helped people understand the war and how our troops fought for freedom, don’t you?” I asked. She nodded. She had another brother who served in the war as well. Both men returned safely.

I plan to meet with this sweet lady again to chat and let her know how much I appreciated her family’s fight for winning over tyranny more than 70 years ago.

In an upcoming blog post I’ll tell about another time when writing/ speaking jelled, creating a wonderful new set of relationships.

Have you ever had a time when two of your worlds collided in a good way?

So happy to be friends with these 2 ladies who care about American vets & their stories. #iloveveterans #wwii #author #americanveterans
Hear the daughter of a #wwii POW tell about her father’s 3 years in Japanese camps during a talk at Wells County Public Library, Bluffton IN, June 16, 6:30pm. We’ll talk about 2 other POWs as well. All stories from my book Captured! Stories of American Wwii Prisoners of War. Copies will be available for purchase. Unique opportunity to grow your patriotism! #wwiihistory #wwiiveteran #bataandeathmarch #warinthejungle #warinthepacific #usarmyhistory
So proud of the vets in this book & their service. We Gave Our Best: American Wwii Veterans Tell Their Stories. #iloveveterans #wwii #writingaboutwwii #veterans