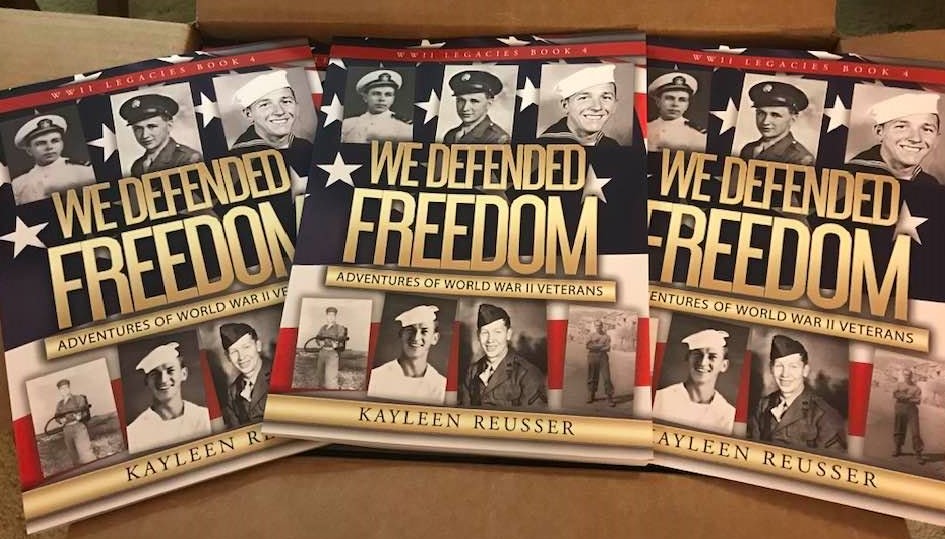 Copies of my new book, We Defended Freedom: Adventures of World War II Veterans have arrived!

Each book is filled with dozens of stories of male and female World War II veterans – by far more men are in each book. Army, Navy, Army Air Corps, Marines are represented. The two women served in the Army as a WAC (Women’s Army Corps) and WAVES (Women Accepted for Volunteer Emergency Service).

Here is an excerpt of a story inside We Defended Freedom: Adventures of World War II Veterans:”Robert Kreider’s breath huffed out in rapid succession. Though outside the cockpit of his C-47 temperatures soared above 100 degrees — normal for the Philippines — chills raced through his body.

Earlier that day, Kreider’s crew with the 64th Troop Carrier Squadron of the Eighth Air Force had taken off from northern Luzon. Since arriving in the South Pacific, the American crew of 10 had flown to war zones in the mountains where trucks could not go, dropping ammunition and supplies and carrying out wounded.

Their latest mission was to take ammunition to Allied troops dug into the mountains fighting Japanese forces. A native guide claimed to know where the troops were located. When the plane approached a dead end, Kreider realized the claim was exaggerated.

Ten-thousand-foot peaks filled his vision. Carefully Kreider reset the big plane, chomping his gum nervously. Were enemy forces below waiting for them to crash?

Suddenly, anti-aircraft fire split the air. Shells punctured the plane’s bottom. Many were flattened by one-half-inch pieces of steel crew members had placed under their seats.

One wing received damage from ground fire, but Kreider managed to maneuver the plane out of the valley and away from the enemy. He was glad they were not transporting wounded.”

Other veterans in We Defended Freedom include an officer on an aircraft carrier, an Army soldier at D-Day, a sailor stationed at Cuba and a Marine who is the only living World War II Medal of Honor recipient.

It is exciting to present another group of World War II veteran stories to readers. My WWII Legacies collection tells about the war, not from the generals’ point of view, but from that of the soldier, sailor and airman. They are the reason we won the war and why we have our freedoms today.

My goal is to present stories in an exciting and factual way that will help readers appreciate what our veterans have done for us. I’ll talk more about this new title in the coming weeks. It is available on Amazon:

All four books in the WWII Legacies series are available as a set. Contact me at KayleenReusser@gmail.com for information.

I have presented talks to many groups about my World War II Tour of Europe and interviews with 260 World War II veterans. I am booking virtual events for 2021, including library summer reading programs.

To learn more about these presentations and/or to schedule a speaking event, contact me at KayleenReusser@gmail.com.

Thank a veteran for his or her service!

One thought on “New Books Have Arrived!”

I’m proud of my husband John for his 21 years of service in the Air Force 1972-2006 (break in service). #iLoveVets
It was a great evening last night at South Whitley Community Public Library talking about my new book ‘Voices From Vietnam: Stories of War.’ Air Force Vet from the book & local resident Lanny Idle told about his service in Thailand & Vietnam. Great participation from a good-sized audience. It’s a beautiful library! Thanks to all those who participated. #iLoveVets Book available on Amazon.
#vietnamwar vets from my book ‘Voices From Vietnam: Stories of War’ gather at book launch. #welcomehome