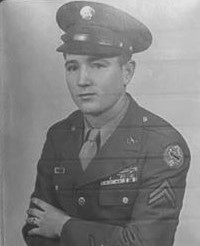 I’m proud to be an American and I’m proud of our American flag. It is fitting that we should celebrate it on its own special day. An American flag has flown on the front of our home since we’ve lived here for 31 years.

You can find the history of the flag and this day on other sites. Please read them to be aware of the historical significance.

Here you can read thoughts about the American flag from a young man who served his country as a Prisoner of War in Japanese camps from 1942-1945.

When I say young, Granville ‘Grant’ Workman was only 15 years old when he enlisted in the Army in summer 1941. He ran away from home and I assume his body build was good enough to fool the recruiters.

on April 9, 1942, after months of fighting, running through the jungle, and basically starving, Grant, who was by then 16-years-old, and thousands of Americans and Filipinos of the Bataan forces with no reinforcements, food or ammunition, surrendered.

Years later, Grant recorded his memories of that day: “Word arrived to lay down arms and surrender. It was tough seeing the American flag go down and the Japanese flag go up.”

Grant became part of the brutal Bataan Death March in which thousands of the captured were killed, tortured, starved. He managed to escape but recorded this memory from a few weeks later:

“Near midnight on May 5, 1942, the enemy landed at Monkey Point on the other end of Corregidor. They took control of the rear entrance to Malinta Tunnel, blocking the bay with warships.

The base fell to the Japanese on May 6, 1942. From my hiding place I watched for the second time as the American flag was replaced by a Japanese one. It felt like losing your mother or father when your country’s flag goes down. You don’t have much hope.”

Unfortunately, Grant was re-captured and served as a Prisoner of War for the duration until being liberated from a Japanese coal camp where he had been taken to work in August 1945. During those three years, he had suffered many illnesses (beriberi, malaria to name a couple), starvation conditions, horrible sanitary conditions, and near death on many occasions.

But he stayed true to the American flag.

After the war, Grant Workman married and he and his family became parents to two children. He worked and lived in a small town where each day he flew the American flag at his home. Grant Workman died in 1998.

Years after his death, his widow shared his memoir of his Prisoner of War experiences with their daughter, Judy Johnson. When Judy shared the daily entries with me, I was moved enough to include them in my book, Captured! Stories of American WWII Prisoners of War.

Judy and I will be giving a talk about Grant’s service and two other POWs from my book on Wednesday, June 16, 6:30-7:30pm ET, at Wells County Public Library. Please contact the library for registration for this unique opportunity to hear what it was like growing up with a WWII POW!

Among Grant’s writings was a document that was entitled, ‘Tribute to our Flag & Country from the American Defenders of Bataan & Corregidor.’ Here it is in its entirety.

“Looking across the channel from my gun position at Mariveles, Bataan in 1942, you could see our beautiful flag gallantly waving over the island of Corregidor. On the darkest night the light on top of its pole shined brightly as a notice to friend and foe.

You don’t know how much you love it until it is obscured from sight for hour after endless hour by the bombs, shells, fire and other debris of battle. Then comes a lull in the battle or a shift of the wind and our flag once again stands proudly waving. Francis Scott Key must have seen something similar to this when he wrote “The Star-Spangled Banner.”

You don’t know how much you love it until that inevitable order comes to haul its tattered and battle-scarred remains down and burn it to keep it out of the hands of oncoming Jap troops.

Then you discover that the Quartermaster had row after neatly stacked row of the flag and you see it become a common item of issue to the Japanese troops and you see it desecrated in every manner.

You don’t know how much you love it until you see it draped over a Japanese banquet table and see sake and other debris flowing from its sides like it was your own blood. Tears came to the eyes of the most gray and battle-hardened veterans.

You don’t know how much you love it until one day, years later, the sky is black with American planes as President Roosevelt had once promised. It was an act of joy to see our planes play havoc with every military target within the Manila Bay area.

You love it even more when you are locked in the hold of a Japanese “hell ship” and hear American submarine torpedoes sinking Japanese ships all about you. As you look about that dung-infested, sweltering and stinking hold and into the eyes of your fellow Americans and see the agony, the inhuman suffering of the sick and dying, the thought comes to you of what a kind act of God’s mercy it would be if the next torpedo was meant for your “hell ship.”

You don’t know how much you love the American flag until one day after 40 months as a Japanese slave, you look out over Tokyo Bay and see thousands of these flags proudly waving over ships and craft of every description. Only those who have been there can grasp the thrill of once again being under the American flag.”

I hope these words will provoke some of the intense feelings of patriotism each American should feel upon seeing our flag. The only kneeling should come in respect and honor to standing before such a great monument to freedom and those who fought for it so gallantly.

Finally, my cousins (by marriage but I like them enough that I pretend we are blood-related) Doctor Jim Mount and his wife, Rowena, have displayed his flags from various areas of military service he served under in the military on their home in Bedford, Indiana: US flag, Midshipman at Annapolis, Medical officer for Marines, Navy and SeaBees. How about that for patriotism!

Thanks to Jim, my husband and son, and all of our veterans for their service.

If you have not already done so, please purchase an American flag and post it outside your home or dwelling. If you have a flag posted, would you consider sharing a photo of it in the Comments? Thanks!

I’m proud of my husband John for his 21 years of service in the Air Force 1972-2006 (break in service). #iLoveVets
It was a great evening last night at South Whitley Community Public Library talking about my new book ‘Voices From Vietnam: Stories of War.’ Air Force Vet from the book & local resident Lanny Idle told about his service in Thailand & Vietnam. Great participation from a good-sized audience. It’s a beautiful library! Thanks to all those who participated. #iLoveVets Book available on Amazon.
#vietnamwar vets from my book ‘Voices From Vietnam: Stories of War’ gather at book launch. #welcomehome