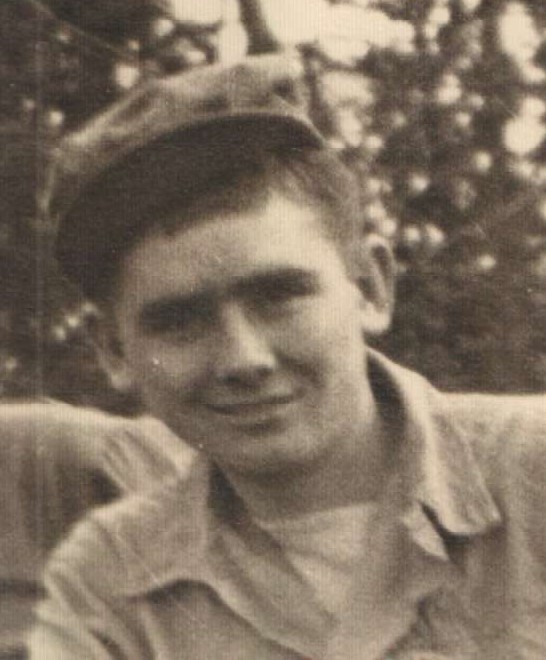 One blessing from my interviews with 260 World War II veterans is not only meeting a great group of people, but sometimes finding great friends among them.

The easiest ones to get to know are those within our local community since this affords ease for visits.

One of the best veterans we have met was Bill Sawyer. I don’t know who told me about him as a WWII veteran but I’m so grateful.

Bill is the only veteran I’ve met who served in the Aleutians – Alaskan territory during the war.

He was a medic. After interviewing 100s of veterans, I know how special medics are to troops.

Bill’s unique story was printed in my book, They Did It for Honor: Stories of American WWII Veterans. You can read it in its entirety at the end of this post.

Bill’s service to his country didn’t end with World War II. He continued to serve in the United States Army National Guard from 1953 to 1980. He retired after serving his country for 31 years.

As he lived near us, we visited him often and encouraged him to sign up for Honor Flight of Northeast Indiana. “I can’t see well enough to make the trip,” he’d tell us.

While it was true he had vision problems, Bill was otherwise in good shape for a 92-year-old.

If you’re not familiar with Honor Flights, check them out. There are many branches around the nation. Honor Flights were created to enable World War II veterans to see their memorial which was not constructed until 2004. By then, many veterans were too old to get themselves there. A pilot flew some of his veteran friends there and the idea took off.

Veterans pay nothing for the one-day charter flight to the nation’s capital, 3 meals/ snacks, transportation, other expenses. The guardians pay their way and the rest is paid by donations.

Finally in 2016, he agreed to go with my husband, John, as his guardian (each veteran was required to have a guardian).

They had a wonderful time with the 200 other people on the trip that flew from Fort Wayne, visiting every military memorial site in Washington DC.

The group of people who work with Honor Flight of Northeast Indiana are tremendously organized, self-sacrificing and make the veterans feel like a million dollars.

I should know because I’ve done two trips with them, accompanying 95-year-old veterans (1 male Army; 1 female Navy) on trips.

I’ve never heard a bad word about Honor Flight of Northeast Indiana, rather tremendous accolades from vets who have gone on flights and their families.

Their trip was further blessed by our daughter, Lindsay, who worked in DC and took the day off to go with her dad and Bill. She had never met Bill but the two hit it off.

Every time Lindsay was home to visit, she’d go to see Bill or call him.

The last time she was home this summer, she could not visit. Bill was in the hospital with a broken hip.

Unfortunately, his 96-year-old body could not keep up with its new demands and he passed away on 10/10/20.

He left a loving family and lasting legacy.

We miss our friend and look forward to seeing again someday in Heaven. Thanks to Bill and every vet/ vet family member reading this. We appreciate your service!

In June 1942 Japanese forces captured the island of Attu in the Aleutian island chain of the territory of Alaska (Alaska was a territory of the United States and did not achieve statehood until 1959). Attu’s location was strategic as it provided control of sea lanes to the Allies across the Northern Pacific Ocean.

This occupation continued for nearly a year until May 30, 1943, when American forces finally regained control of the island.

The more than two-week battle ended when most of the Japanese defenders were killed in brutal hand-to-hand combat after a final charge broke through American lines.

The Battle of Attu was the only one of World War II fought on American soil. It was also the only land battle in which Japanese and American forces fought in Arctic conditions.

Bill Sawyer served as an Army medic in the Aleutians during World War II.

Sawyer and other troops traveled 1,200 miles west to the island of Adak to work in the dispensary. “We were the first group to treat soldiers wounded in the Aleutian Islands,” he said.

Sawyer grew up in Bluffton, Indiana. After completing basic training at Camp Barkley at Abilene, Texas, in 1943, he was assigned to the medical corps.

At Camp Reynolds in Pennsylvania (then Camp Shenango) Sawyer received additional medical training before leaving in December 1943 for Fort Lawton in Seattle. There he and other soldiers boarded a troop ship, destination unknown.

When they disembarked, they were at Anchorage, population: 10,000.

Working from 6pm-6am at the hospital at Fort Richardson, Sawyer saw many injured soldiers. “Army Air Corps planes flew at night,” he said. “If the pilot was badly hurt, we administered trauma care, then sent him to a hospital in Seattle.”

As Alaska was not yet a state, Sawyer and other troops were considered part of the Foreign Service.

Sawyer and other medics provided medical care to the Alaska Territorial Guard (ATG), otherwise known as Eskimo Scouts. “They were a military reserve force comprised of men from various local ethnic groups,” said Sawyer. “Most were friendly and spoke English.”

Sometimes injuries were severe. Once Sawyer opened the door to an ambulance transporting a badly burned soldier. “There’s nothing like the odor of burnt flesh,” he said.

Off-duty living conditions of medical staff were primitive. “We lived in squadron tents with a pot-belly ‘Johnny’ stove in the middle to provide warmth,” said Sawyer. “We wore military winter weather clothing and long johns to keep warm.”

When temperatures dipped to 30 below, the soldiers didn’t spend much time in the showers or latrines. “The severe cold made for some quick trips to the john!” he said.

Living conditions for the soldiers was slightly better on Adak than at Fort Richardson. “We lived in heated Quonset huts instead of tents and the latrine was inside too,” said Sawyer.

Frigid temperatures and volcanic ash covered the soil prohibiting the growth of trees and flowers. Lack of natural beauty and isolation at Adak created an emotional tumult for many soldiers. “The constant darkness in winter caused many of the guys to break down,” said Sawyer.

To counteract the area’s remoteness the Army provided a theater, pool table, and day room for soldiers to play cards. When Sawyer found a dog outside of the barracks, he adopted it. ‘Deusy’ followed him everywhere. “I think Deusy helped me stay sane,” he said.

The United Service Organization (USO) sent Hollywood stars like Ingrid Bergman to Adak to entertain troops. “She asked each soldier his name and wrote it on photos of herself that she gave to each of us,” he said.

Another challenge was the ‘williwaw’. This sudden blast of wind descended from the coastal mountains to the sea, blowing up to 150 mile per hour. “We tied ropes to hold people and things in place when it came through,” he said.

The war ended in August 1945, but Corporal Sawyer remained in Alaska until his discharge in December. In 1948 Sawyer married Betty Coffield and they became parents to two sons.

In 1953 Sawyer re-enlisted with the Indiana National Guard, serving through 1984, retiring at the rank of Sergeant First Class.

“I was glad to have served my country during World War II,” said Bill. “I feel honored to have done so.”

4 thoughts on “Tribute to Bill Sawyer- Medic in Aleutians WWII”