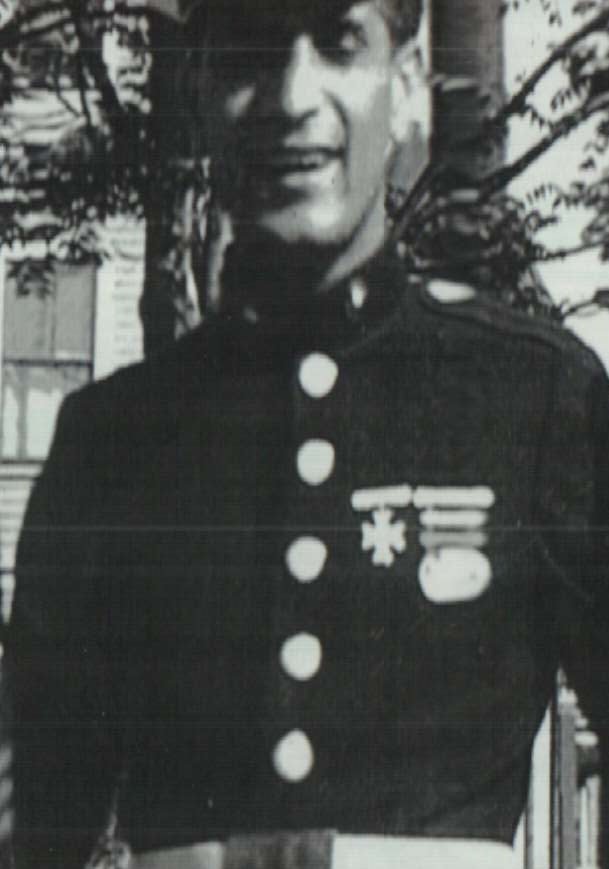 I met Bart a few years ago when he was recommended to me by his friend, Charlie Conrad. Charlie was a WWII vet who served in the Navy. Each time I visited Charlie, he’d say, “You need to talk to Bart Corricelli.”

Unfortunately Bart was always in Florida when I called. Finally, one summer’s day he was at home in Indiana and we arranged an interview. He was very easy to interview and introduced me to the gutsy Marine who became an iconic figure in that particular branch — John Basilone. Bart had a biography about him and convinced me to try reading about this brave Marine who ultimately gave his life for his country. It is on my bedstand now.

One other thing about Bart– this month he celebrates his 99th birthday! I called him to wish him Happy Birthday and we had a sweet talk. I have nothing but good thoughts about this vet.

On to Bart’s story which is featured here in full from my book, We Gave Our Best: American WWII Veterans Tell Their Stories (Bart’s photo is at top, second from left)

“On February 23, 1945, a flag-raising event conducted on Mount Suribachi at Iwo Jima by a group of six American soldiers made history. Joseph Rosenthal’s photo of the scene became one of the most famous taken during the war, reflecting America’s determination to win over the enemy.

Bart Corricelli of North Manchester, Ind., was on the island at the time of the flag-raising. However, he and other soldiers of Company C, 4th Tank Battalion, 4th Marine Division were at the other end at Motoyama Airfield No. 1, too busy fighting for their lives to witness the iconic event.

Nicknamed ‘Pork Chop’ by Allied troops because of its shape, Iwo Jima was part of an island-hopping strategy by the Allies. “Our planes needed to land there to refuel on their way to Japan for an invasion,” said Corricelli.

After bombing Iwo Jima for 30 days with little opposition, Allied troops had mistakenly assumed few enemy forces remained. That idea disappeared when the ground erupted and Japanese troops stormed out of underground bunkers. Corricelli’s tank was hit after reaching 100 yards on the beach. He and soldiers inside the tank fled to safety. “Normally we exited out the bottom of the tank,” he said. “After being hit, we went out the top and ran to an embankment out of the line of fire.”

Of the 70,000 American troops who fought on Iwo Jima from February through March 1945, 6,800 died with approximately 20,000 wounded. The Japanese suffered worse casualties with approximately 20,000 deaths. “They preferred to die for honor so we captured only a few Japanese soldiers,” said Corricelli. He was the youngest of 10 children born into an Italian family in Boston. After graduating from Somerville High School in 1940, Corricelli followed the example of three older brothers by enlisting in the Marine Corps. “I thought the Marines were the best,” he said.

At Parris Island in South Carolina Corricelli endured the toughest 10 weeks of his life. “We GIs hated our DI’s (drill instructors) during basic training,” he said. “Later, we realized they taught us discipline and how to be tough.”

When his unit was sent to the Battle of Saipan in the Mariana Islands in summer 1944, Corricelli drove a tank. “At first we thought we were safer in tanks than the infantry on foot,” he said. “But we were really afraid of mortars.”

Troops were warned against opening hatches on tanks until given the all-clear. Sadly, not everyone listened. “One guy got shot,” he said. That Marine was one of more than 2,000 lives lost in 30 days of fighting at Saipan before the Allies claimed victory.

Another difficult scene for Corricelli was that of women and children committing suicide by running off of cliffs. “The Japanese military had told them the enemy would eat them,” said Corricelli. American troops of Japanese descent called ‘Nisei’ tried to convince the frightened people not to jump, to no avail.

At Tinian Corricelli’s tank was hit by a mine. Miraculously, he and his crew escaped serious injuries. However, 500 Allied soldiers who fought to gain control of an air field lost their lives. Corricelli also participated in conflicts at the Marshall Islands, again without injury.

When Japanese forces officially surrendered in September 1945, Corricelli was thrilled. He and thousands of other Allied troops had been ordered to plan to participate in an invasion of Japan that fall. Allied leaders estimated 1 million lives might be lost during the proposed invasion. “All of us Marines thought Truman was the greatest guy in the world for making the decision to drop those bombs,” said Corricelli. “We loved him.”

Corp. Corricelli was discharged in November 1945. He moved to Huntington, IN, where he married and raised a family. Later, he moved to North Manchester where he was active with military affairs.

After more than 70 years, Corricelli feels mixed emotions while looking back on his time in the military. “We lost a lot of guys,” he said. “Things that we went through makes me cry, but I met some wonderful friends and consider myself lucky.”